Just a short commute to Colon (262 nautical miles) from Cartagena.  The last time we were here in 2003 (Celebrity Horizon – RIP), there was not much in the port area.  Today, there is a shopping center and a new Radisson Hotel. 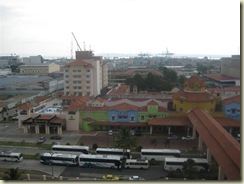 From the ship, you can see the ships in the Caribbean Sea awaiting their turn for transit through the Panama Canal.  FYI – it costs about $400,000 or more for a large cruise ship to transit the canal (about $120 per person and $80 for an empty stateroom). 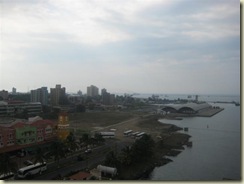 Colon, Panama – Ships lining up for the Canal

No tour today so our plan is to explore the shopping facility and nearby streets in the Colon pier.  Before we could get to the shopping area, we had to run the gauntlet of taxi and tour operators eager to get us on a tour of Colon and the Panama Canal.  Having survived that, we did check out the shops – not all air-conditioned – and looked for an internet cafe.

Having no luck, we decided to see what the new hotel was like.  It was like an oasis in the desert.  A classy looking hotel with spiffily dressed staff was a strong contrast to the frantic scene going on outside.  Noticing a business center in the lobby, we asked if we could use the computers.  Even though we were clearly not guests, the desk clerk said it would be OK.  So, thank you Radisson for allowing us to touch base with people back home – the internet was quick and we checked our mail and a few other things before wrapping up.

The streets near the shopping facility did not look too inviting so we headed back to the Equinox for lunch and some quiet time.  Before we boarded, I managed to document our stay in Colon with this picture. 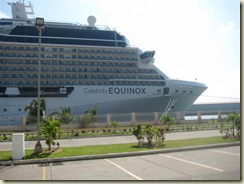 The rest of the day was spent in the Solarium relaxing and sipping iced tea.

After Dinner, we caught Greg Bonham again in the theater.  Ellen caught up with him after the show and he gave her a CD (signed and all).  He also said he would drop off a copy of his song - “Who Will Stand for Freedom” to our stateroom before he left the ship.