St. Kitts was sighted by Christopher Columbus in Voyage 2 (1493), who named the island after St. Christopher, the patron saint of travelers (and not himself as our guide told us).

We are both of semi-early tours so we ordered room service. There was a little mix-up in the order and my scrambled eggs turned out to be the equivalent of half an egg. I did have oatmeal so I wouldn’t starve.

We are docked at Port Zante along side the Grandeur of the Seas. 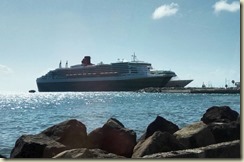 We are on “The St. Kitts Scenic Railway” tour this morning. We went on separate minibuses (Deon was our driver-guide) on a mini-tour of Basseterre and surroundings (45 minutes) before hopping on the train.

Departing – From Through the Windscreen 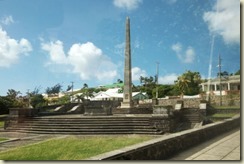 We passed a village called “Old World” by our guide, who told us that this was the first British settlement on the island.

I spotted Brimstone Hill in the distance as we made our way to the train hop on point.

Brimstone Hill from the Van

The train was an old narrow gauge machine pulling about four cars (Ellen and I met up in Car #2).

The train was super squeaky and noisy so it was hard to hear the narration – she sounded really good. The train supplied either Pina Coladas or punch as we rolled along the Caribbean and Atlantic Coastlines. The drink was good so I asked for seconds and the “bartender” made me another.

We saw lots of sugarcane fields (even though they are not currently producing), caught views of neighboring Nevis.

Nevis from the train

Brimstone Hill – a UNESCO World Heritage Site - also came into view. Brimstone Hill dates back to the 17th century and was the site of a siege imposed by the British on the French.

The Atlantic Ocean waves was clearly rougher than the Caribbean.

The train ride took about two hours and ended up just outside Basseterre. The ride back took just about 10 minutes. We decided to just go back to the ship instead of wandering around Basseterre for a while (it was hot). I ran into Ellen at the entrance to the pier, where she was tending to a woman who fainted due to the heat. The guest was drinking and feeling a little better. I flagged down the guy who was shuttling people and told him we need to get the passenger to the QM2. The guy was charging $1 a person for the two minute ride – I picked up the tab for us and for the passenger. The passenger was able to make it up the gangway.

We got a late lunch and then out to the open deck.  From there, we were able to get good views of Basseterre and Nevis.

The sail away from St. Kitts was super scenic.

Ellen’s discussion with the Maître D’ seemed to work because we were assigned to Table 103, which had no neighbors and was very quiet. We had pre-ordered some veggie items – mushroom soup and a pizza flatbread for me. I had a pasta with creamy tuna sauce – not bad. Ellen tried the haddock. Overall, the meal was good and a quiet one as well. We pre-ordered veggie items for tomorrow’s meal.

Tonight’s entertainment was “Singers in Concert” featuring the Cunard Singers plus both orchestras, the string quartet, and the harpist. The singers were fantastic both individually and as a group. We have seen this show before but the song list seems to have changed. A very entertaining show.