The skies are gray and it looks like rain again. 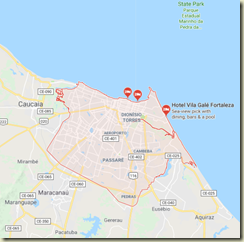 Fortaleza is our first real port since our Caribbean Island Hop and the first time for us in Brazil. It is a huge city (Population of 2.6 million), which reminds me of Panama City.

This is because there is a neighborhood – Meireles - of modern condos or apartment buildings that look like the ones in Panama City but with not as many stories. The beach at Fortaleza, which is probably nice on a sunny day, is called Iracema.

The shuttle took 40 minutes to go to town ($20/pp – waived because we are guest entertainers) but was only 3-4 miles away. When we got to the drop point, the bus driver gave us specific instructions on where to go (to the Cathedral) and where not to go (toward the favelas). Yes, we are in Brazil.

Following his advice, we walked through the courtyard of the Central Tourist Office (this used to be the old prison and you can still see the bars on the windows) took a left and walked down the street toward the Cathedral.

The sidewalks were in disrepair and there was dog poop everywhere. Fortunately, we could spot the spire of the Cathedral in the distance, which provided a good reference point. We stopped first in Ferreira Square, a park that looked like it needed a little TLC – it was a good spot to take some pictures as there were very few people there at the moment.

The Square also had an installation with the name of the city on it – perfect for a shot.

After walking about five or so blocks we found the Metropolitan Cathedral of St. Joseph, an impressive gothic structure that can seat 5000 persons. The construction of the Cathedral was begun in 1938 and took 40 years to complete.  The spire reaches a height of 75 meters.

We went next to the Central Market, located a block from the Cathedral.  From the street, the Market looks like an athletic stadium.  The current building was completed in 1998 – before that a conglomeration of little shops served as the municipal market.

The inside of the market was air conditioned and consisted of four floors of vendors.

The floors could be accessed by stairways or a single elevator. A series of catwalks provide a panoramic view of all of the shops.  The vendors were selling everything from produce to fine art. I was on the lookout for a cap from Fortaleza but all of the caps were too small. The search continues.

As we were leaving the Market, we noticed another of those city signs.  We found an English speaking person (maybe a fellow passenger), who took our picture.  He couldn’t get the whole sign in.

Based on the advice of our shuttle driver, we did not wander far from the Cathedral area. There were some interesting buildings and sculptures right there including a space age installation that had no identification plaque.

We walked back to the shuttle drop point and, in a few minutes, we were back on the bus to the cruise terminal.  We were lucky with the weather as the threatening skies did not materialize into rain.

We went up on the open deck to watch the gray but scenic sail away.

We had dinner in the Bordeaux Dining Room – Cesar Salad, Pesto noodles, Tempura Veggies (the best item). We continue to be able to get a table for two. The Maître D’ has been very helpful.

Showtime tonight featured Michael Barron – billed as a Modern Magician – we’ve seen most of these illusions performed by other magicians but he was entertaining.