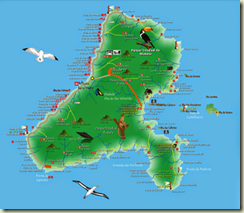 Our first time in Ilhabela, an island off the Southeast Coast of Brazil and part of the Ilha de Sao Sebastiao Archipelago. The island was discovered by Americo Vespucio (Amerigo Vespucci) in 1502. The island sits about four miles off the Brazil mainland and about 210 miles south of Rio de Janeiro (this means that the ship sailed past Rio yesterday and will double back to get there tomorrow). The village of Ilhabela was founded in 1806 and the current population of the island is about 29,000 people.

Ilhabela is a tender port, our first of this cruise.

Also anchored here today is the Celebrity Infinity – the ship we took from Santiago Chile through the Panama Canal in 2011.

Ilhabela From the Ship

We went to the Provence Dining Room to pick up our tender tickets. We were told to come back in 45 minutes to catch the tender. We arrived back a little early to find the dining room packed. The tenders were running a bit late and there was also a medical emergency to contend with, also slowing the tenders. After another 30 minutes or so, our number was called. The good thing was that we didn’t wait in the stairway but walked right on to the boat. The bad thing was that it took at least 10 minutes to load the tender and the boat was hot and steamy.

The Island Princess from the Tender

The ride to the tender port was short.

The island lives up to its name – “Beautiful Island”. Lush and green with hills and mountains and nice beaches.

The town was cute and crowded – they were setting up for Carnival – probably a parade down the main street.  There were lots of kids in the town coming in from the beaches probably.

The city center is home to the blue and white Nossa Senhora d’Ajuda church dating back to the 16th Century.

Main Square and Church and Me

We checked out the little shops looking for some trinkets (mostly magnets).  We found a nice little courtyard outside one of the stores – perfect for a picture.

We even found a reasonable public restroom.

After pretty much checking out the whole city, we found a little sidewalk bar. I ordered an Antarctic Beer for $2 – a 600 ml bottle of ice cold beer.

That’s a Lot of Beer

The beer was fantastic and I finished the whole thing.

The heat got to us (it was actually about 87F and humid) so we again sat in a hot tender and made our way back to the ship.

Salad and pizza was lunch.

The deck was too hot and even the Lotus Pool was too warm (the AC was not working at efficiency). We both retreated to the cool confines of our room to figure out our dinner plans and entertainment for tonight.

We had dinner up in the Horizon Court – the pasta with salmon and vodka sauce was OK.

We went to the 8:30 PM show featuring Chris Watkins and Todd Adamson, who put together this show called “Duet”. The show was very entertaining – they are both good entertainers and Todd sang songs I liked – a huge voice. The show was a little loud but very good.

From there, it was back to the room – tired from the heat and ready for Rio.