This is our first time here in the independent country of St. Vincent and the Grenadines. St. Vincent was named by Christoforo Colombo after the patron saint of Lisbon (He gave a lot of places Portuguese names; so is the Explorer Portuguese after all?).

The rainy weather continues as the prediction is for showers today.  Hoping to dodge the rain on my tour.

I am on the “Highlights of St. Vincent” Tour. The walk to the bus area takes us through the cruise terminal and shops.  We waited a little bit for the buses to arrive – fortunately, we were under the roof overhang so we didn’t get wet.

Evidence We are Here

Jungle-Like View From the Pier

We are on a minibus (the only transport able to handle the roads on the island). Our guide is Adelcia – a local very young woman who is also a teacher and a nurse.

Our first stop is the obligatory view point overlooking the harbor.  This will give us a partial view – in this case – of Island Princess docked.

Island Princess in the Harbor

The bus continued up the hill overlooking the harbor.

Once away from the city, the bus started to climb to higher altitude.  I’m glad again that we are on a mini-bus as the roads are narrow (and slick).  The driver seems to know what he is doing (at least, he’s not narrating as well).  We reached a summit of sorts and the guide asked if anyone wanted to get out an take a picture of the valley.  I think I was the only one who braved the drizzle to take a picture.  The valley is called the “Fruit Bowl” but the rainy conditions showed nothing but fog.

Our next stop was Indian Bay, on the south side of the island – the Caribbean side - a little over three miles from Kingstown. 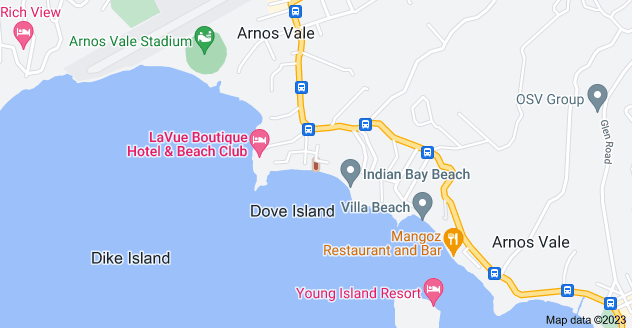 There were less than optimal facilities at Indian Bay and the coconut milk drinks we were promised didn’t materialize due to a glitch in communication.  On the plus side, Indian Bay was scenic.  I took a lot of pictures and Adelcia took a picture of me. 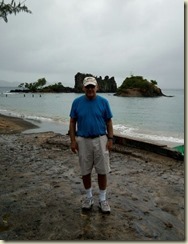 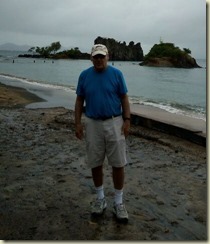 Our next stop along the water was Paradise Beach Hotel for photos and Rum punch. Too wet to get out for most of the passengers.  I spent time chatting on the patio with an American visiting the hotel.  Very interesting.  The actual hotel guests were eating an early lunch, which looked pretty good. 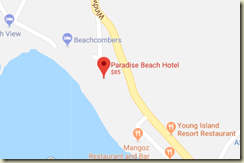 Pretty tired when I got back – the bus was pretty bouncy –  a combination of the roads and shocks.

Ellen was on tour, as well, and visited the Botanic Gardens and other sites.

Showtime Tonight was unusual.  The headliner was  xylosynth performer David Meyer and dancer wife, Dawn.  It was a multimedia show featuring the high tech xylosynth and lasersynth (uses lasers and special gloves to generate music). Crazy cool but the lights and sounds will punch holes in your neurons.

David Meyer and his Electronic Show