It is an absolutely beautiful day cruising off the coast of Brazil. We are close enough to see the cities and towns along the coast. The first day without rain in the forecast.

The morning is free – up a little later, unrushed breakfast, and sipping a frozen decaf latte in the Patisserie.

My 1:00 PM presentation,  “The Lost Dauphin of France”, drew a 550 plus attendance. Also included an updated “OJ Moment”, which the audience seemed to like.

We spent the whole afternoon out on Deck 7 – first time this cruise. The chairs are not as comfortable as those in the Lotus Pool but the view and breeze are priceless.

The headliner was violinist Chris Watkins – the shows continue to be at 6 and 8 PM (to accommodate the early to bed demographic). We had dinner up in the Horizon Court (Mexican Buffet night) and because of the timing did not make the show (I think we have seen him before).

Rooming with a a Birthday Girl. I got Passenger Services to decorate our door with balloons and a birthday poster. 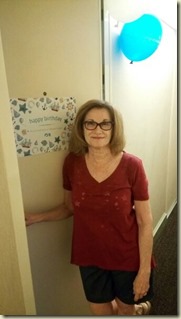 The ship sent along some nice cards as well. 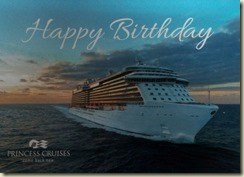 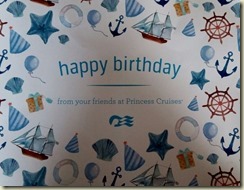 Weirdest moment so far – I was heading back to the room at around 11 AM when I heard the captain come on with his noon update. Apparently, there was a time change last night that didn’t show up in the patter (probably announced at the show but we didn’t go) and our fleet room does not get those little notes on our beds announcing time changes. We worked with Vic, our attendant, to get them in the future.  I could have missed my own talk.

Because the attendance is so consistent, I am now curious about the number of English speakers on board.

In the morning, we sat out on Deck 7 but we could tell it was going to get hot out there so in the afternoon, we were back in the Lotus Pool area (also hot but not as much).

Todd Adamson was the headliner tonight – he is a Broadway performer who was in the Queen Musical “We Will Rock You”. We caught the end of his show and he does have a good voice and is very theatrical on stage.

Tonight’s entertainment included the Zinger Quartet and Arny. Tonight, Arny was joined by headliner Salvatore Hasard, a singer from the party band, and the waitress from Serbia – jam night.

Another beautiful day at sea and we have the morning to ourselves as my seventh talk on this cruise is at 2:15 PM.

The cottage cheese vanished from the breakfast buffet a couple of days ago and it must really gone because it has not reappeared like early on the cruise. Hoping for a restock in Rio.

After working on today’s talk in Patisserie over an iced decaf latte, we found nice loungers on the shady side of Deck 7. I finished “Playing with Fire” (my feeling is that Tess Gerritsen should stick with Rizzoli and Isles detective/forensic stuff). I am now reading Lee Child’s “Make Me” as I continue to go through the Jack Reacher novels. This time Jack teams up with an ex-FBI agent to get to the bottom of a mystery in rural America – sound familiar? The hook – as is the case with most of the Reacher books – was immediate.

Instead of lunch, we had a late brunch up in the Horizon Court – bagels with lox and cream cheese plus a cheese, tomato, and onion omelet. A good alternative to the routine lunches we have been having.

“Extreme Forensics: Non-Human DNA Testing” draws my consistent 550 plus attendees and for a new talk, it went well and ended at about the 40 minute level. A few people left early to see the up close magic class. Quite a few people lined up to comment or ask questions.

Since it was such a nice day, we went back to Deck 7 and decided to stay there and not go to the 6 PM performance by Pianist/Piano Man, Stephen Kane. We would go to dinner in the buffet when we wanted to and, later on, catch the Deck Party on Deck 14.

Note: As we were watching the ocean go by on the Port side, the water turned to an interesting shade of green from the blue color we had seen all afternoon. I thought it was an illusion but I was able to capture it with my phone camera. Involves light and physics I’m sure.

At 6:30 PM, we changed our plans, got into dinner clothes and took a shot at getting seats in the Bordeaux Dining Room. We got a nice table for two away from most of the crowd. The ship has gone through a complete cycle of menu items so we are now in the “rerun” phase. I had a double Cesar Salad, Plantain Chips with guacamole, and salmon with a baked potato. Ellen had the Sole Colbert and we shared the ham-less Spaghetti Carbonara. This time around, the food was delicious – our best dinner to date on this cruise. I topped it off with a made to order sundae.

We decided to pop in on Stephen Kane’s show. We were standing in the back when two people decided to leave – we grabbed their seats and stayed for the rest of the show, which was pretty entertaining.

We went up to Deck 14 to get chairs for the big Party Under the Stars. We came in at the end of Karaoke (very loud and the words were on the movie screen).

We were only able to handle about 15 minutes of the Party Band Plus 5 before fleeing to our room.