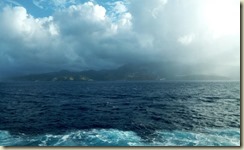 We have to get up a little earlier today because we are both on the same tour (different busses) – “St. Pierre and Rum Factory”. We took this tour quite recently but the tour is mostly in an air conditioned bus so that works out for me. We met on the pier and walked the long pier past the Simon Hotel to the waiting busses.

Looking back along the pier, I was able to get a wonderful shot of the Island Princess.

Our guide was Aude Line, a young French woman, who spoke perfect English. Her descriptions were full of information and she was able to effectively point out sights. We left a little late – our first stop was the church built as a scale model of the famous cathedral on Montmartre in Paris – Sacre Coeur de Balata. The church looked a little more impressive this visit – also ran into Ellen at this stop. 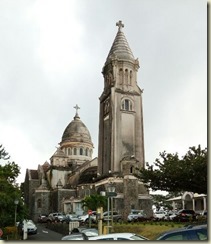 There were six busses doing this tour so our guide told us that she was changing the itinerary and going up the West Coast of the island to the town of Saint Pierre. Saint Pierre used to be the capital of Martinique until the 1902 eruption of Volcano Pelee destroyed the town (pyroclastic flow and toxic gases just like Pompeii). From there we would go to the Depaz Rum Factory and we would have the tasting all to ourselves. Of course, some of the other busses had the same idea and so we were still at the venues with other tours.

Saint Pierre was about 45 minutes away. The ride took us through the rainforest and afford great views of scenery and mountains. 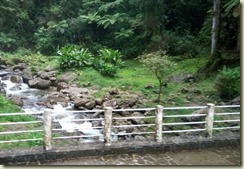 On the Way to St. Pierre

In St. Pierre, I didn’t go into the Volcano Museum – a small modest museum. I also didn’t go with the group to the eruption ruins – the highlight being that of 31,000 victims, there was only a single survivor – a prisoner who was in a lower part of the prison.

Our last stop would be the Depaz Rum Distillery and Factory.

Volcano Pelee Hidden in the Clouds

We saw the equipment and storage facilities and then proceeded to the store to taste “New” and “Old” Rum along with some rum mixes (pina colada or lime). The rum is pretty strong but smooth. Only pirates drink rum straight.

We got back for a late lunch – the usual.

After lunch, we spent time on the open deck reading and taking a few pictures of Martinique.

Martinique From the Ship

Dinner was also up in the Horizon Court – I should mention that the hand washing is still mandatory – I am very impressed by the ship’s position on health safety.

The Showtime Headliner tonight is our old cruise mate, Karen Grainger. We haven’t seen her in several years. She has been on Crystal during that time but is now branching out. Her show was updated with new songs and she is still a fabulous singer – the highlights were “I Will Always Love You” and “Time to Say Goodbye” (her finale number. We met up with after the show and chatted for a few minutes. Don’t know when we will see her again but it was nice to reconnect. 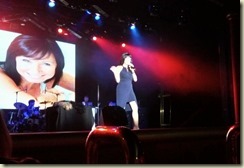 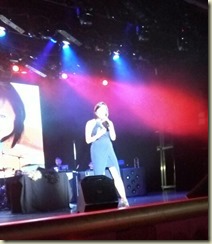 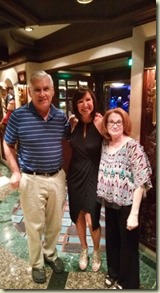