It’s snowing today (not heavy) but another reason to get out of Chicago and travel to someplace warm. To that end, we are leaving for a combination Caribbean / South America cruise on the Island Princess (Fort Lauderdale to Buenos Aires). It has taken a lot of preparation to get this cruise set up – Brazilian Visas, yellow fever shots, extra documentation for the Brazil segment. One thing for sure – we are going to set up another one of these cruises to South America so that all of our work and expenses won’t be for just this one cruise.

It’s another early flight – American 2265 – the same flight we took in December for another cruise except the departure time is 7:25 AM instead of 7:45 AM (I think American moved up the flight time since we ticketed). This meant that our taxi time was now 5:45 AM. The taxi arrived on time and, even though the roads were a little slushy, we got to the airport around 6:10 AM. There was no one in line at the Priority Check In so getting our bags tagged took no time at all. Then on to TSA Pre-Check. There were a least a hundred people in the TSA line but it moved very fast and we only spent about five minutes getting through security (I also found out today that the jacket I have been wearing through Pre-Check is “too long”, meaning I had to put it in a plastic tub).

Our gate, K3, is very close to security (a bonus) – it is now 6:30 AM and boarding will begin shortly. We boarded and took our exit row seats (aisle across) and another bonus – no one sitting in either middle seat. I noticed that our plane has some snow and ice on the fuselage and wings so I was sure we would need to be de-iced. There was a de-icer by our plane but he pulled away. The Captain announced that as soon as the bags were loaded, the plane would be de-iced.

We took off about 15 minutes late – the climb out was pretty smooth but the flight itself was choppy enough to warrant the seat belt sign to be lit for almost the entire flight.

One Hour from FLL

I did have to make a dash for the washroom when the air smoothed out a little. The approach was choppy – lots of broken clouds in the area.

Our bags were one of the first to appear on the carousel and the shuttle from the hotel came in a reasonable amount of time. The temperature in Fort Lauderdale was 73F. We are once again staying at the Quality Inn and Suites Airport/Cruise Port South. This time we are in room 246, which is the second to the last room on that wing – hoping for a quiet night and some needed sleep.

We also found out from the front desk (later confirmed by Princess Cruises) that boarding for the Island Princess would be delayed until about 3:00 PM due to the ship being “cleaned”. Our shuttle tomorrow is scheduled for 2:30 PM – we are hoping to get late checkout.

Room 246 is in better condition that some of the rooms we have stayed in at this hotel. The paint looks fresh and the bed seems in good shape. The desk waived the $2 fee for the room safe (how annoying).

After a little rest in our room, we walked to the Michael’s Store located in the shopping mall next door to our hotel. Michael’s was the last store in the mall and about a mile walk. They didn’t have what Ellen was looking for so we walked across the street to K-Mart. No joy there either but we did pick up some bottled water for tonight and for the ship.

Searching for restaurants on Google, I found a place called “Hummus Factory”. 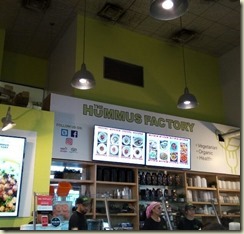 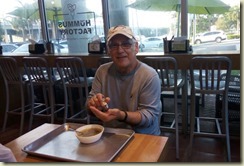 Veggie Soup at the Hummus Factory

It was at the corner of Sterling and Oakwood. The place was new (open a year and half), kosher, and run by Israelis. We ordered two falafel pitas and a bowl of vegetable soup. The soup was very good and the falafel pitas were huge with giant falafel balls. Everything was good and I would come to this place again.

We are back in the room resting and I am logging the day.