This is our first time at this port – it might also be the first time Island Princess has been here. Trinidad and Tobago is an independent nation (from the UK); Tobago is 26 miles from Trinidad and Venezuela is only 7 miles away. Both are accessible by ferries.

We are docked today behind the MSC Fantasia. 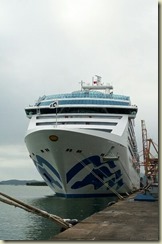 We got up early to help dispatch passengers to their morning tours from the Princess Theater. I had a second breakfast of bagel lox and cream cheese and Ellen has breakfast #1 in the Horizon Court. We were there when the buffet was turning over for lunch so that would suffice for lunch.

We are both on the same tour today – “City Tour and Angostura Bitters Factory” which departs at 12:30 PM from the pier. The cruise terminal is almost a half mile from our ship so I’m glad we are starting right next to the gangway. This is a commercial port full of containers. When we got down to the pickup point, our ship was being loaded with produce. A tricky process and scary to watch.

We let all of the passengers board and we boarded the last bus – there were plenty of seats and I was able to get a double seat so I could stretch out and take the pressure off my aching back. Our guide is Wendell and our driver is Donald. Wendell speaks the Queen’s English (and Trinidad, whatever that is).

The ride through Port of Spain and it’s new building near the port was brief and we entered the town of Levantille.

Levantille is home to the Angostura Company, which was established by the Siegert Family of Germany. Long story short – the Siegert Brothers were trying to develop a homemade medicine for gastric issues and four years of experimenting with spices and herbs resulted in the Angostura Bitters. Angostura was a city in Venezuela. Today, the Bitters are used mainly in mixed drinks but Wendell said they can enhance the taste of soups and other foods. Two drops of bitter into a glass of water can cure your upset tummy – original mission accomplished. 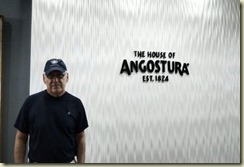 In the Lobby of the Angostura Company

Our tour (there were three busses there) started off with the history of the company. We then visited the butterfly collection – the company bought a private collection of 8000 butterfly species and display some of them in the factory.

Then on to the Angostura Museum which contains artifacts related to the product but also other items (e.g. a painting of Napoleon Bonaparte).

Our next stop was the Bitters manufacturing room – a hot and not totally spic and span room. We were told that taking a photo in this room would result in a one year jail term and a $20,000 fine – this was because there were “"super secret things” in this room. I didn’t see anything in that room that would that would tell you anything about the manufacturing process. There were vats that contained the herbs and spices that make up the bitters and you might be able to make out what some of them are. BS meter was registering HIGH.

The last stop was the tasting room. Angostura also makes several types of rum. I tried the coffee flavored rum (just like Kahlua) without and with some bitters added. There might have been a little difference in the tastes. I also tried the only soda that the company makes, LLB – Lemon Line and Bitters. This is a fan favorite in Australia and it was good but not earthshakingly good.  The whole tasting process was interesting and fun.

From the plant, we began our city tour. One of the sites along the way was the Port of Spain “Castles” – these big house, now many under renovation, were built between 1902 and 1904, by rich folks around the time of the sugar cane industry collapse.

The Castles of Port of Spain

We also saw the Center for Performing Arts – super modern structure designed by a Trinidadian but built by a company in Shanghai China.

We passed by the Queen’s Park Savannah – a huge urban park with a multipurpose open field.

Lining the streets of the Park were rows of vendors.  This reminded me of the vendors in Washington DC that also populate the streets and parks.

Near the Queen’s Park is the Memorial Park, which is a memorial to the Trinidadian soldiers who served in the first two World Wars.

Our final stop was the Botanical Gardens, which houses plants from around the world.

We got back to the ship late and were on board shortly after that.

We were lucky with the weather as there was definitely rain in the area.

We had dinner in the Bordeaux Dining Room – Cesar Salad, Fettuccini Alfredo, and Salmon.  The standard, but always good, dinner choice.

Comedian Noodles Levenstein was on at 6:30 PM and we found seats in the front row (he doesn’t single people out who sit up front). He was very funny in a smooth and slick way. We have never seen him before. I hope he has a second show.

Music, reading, and puzzles rounded out the evening.