Port Information.  Amber Cove was built in 2015 by Carnival Corp as a way of opening up the Northern part of the Dominican Republic to Cruise Ships. It is located on the Bay of Maimon near the town of Puerto Plata. Before this port opened, cruise ships had not called on Puerto Plata in 30 years. Puerto Plata was discovered and named by Christopher Columbus during one of his four voyages. Puerto Plata’s beaches are on the rocky Atlantic Ocean. While agriculture was a major part of the DR economy in the past, today it is tourism.

This is our first time in Amber Cove and only the second time we have visited the Dominican Republic. 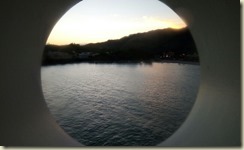 Sunrise in the Dominican Republic

We are both on morning tours today.  Ellen’s tour is very early so we both had room service – I went off menu and ordered two pancakes – I got my pancakes but there were four of them – my two scrambled eggs turned into four scrambled eggs. Who know how the orders are read and interpreted. In any event, the pancakes were good.

Amber Cove is a nice complex and there are several ships here today, including a Costa cruiser.

View from the Pier

Beyond the entrance, there are new shops and restaurants for cruisers to visit.

We met our tour busses just beyond the Port facility.

Our first major stop was Parque Independencia (“Independence Square) in the Civic Center of Puerto Plata.  As we made our way to the Square, I could help but notice how many young people were on the streets.  There were also a lot of motorcycles zipping through the town (we were told that bikes are a popular form of transportation in the Dominican Republic).

Independence Square is surrounded on all sides by stores and bars (lots of bars).  Pastel colors and Victorian architecture are a feature of many of the buildings around the square.

From Puerto Plata, the tour stopped at Ft. San Felipe.  Ft. San Felipe was constructed in 1577 to protect Puerto Plata from pirates and privateers  Today, it is a museum containing military items from the 18th and 19th century.  The complex overlooks the Atlantic Ocean.

The Atlantic Ocean from the Fort

From the Fort, the tour headed back to the Port.  Lots of views of the Atlantic Ocean including an offshore statue of Neptune, God of the Seas.  We also drove by a massive landfill loaded to the max with garbage.

Neptune Looking Over His Dominion

My tour only ran two hours so I was back by lunch – I went up to the Boardwalk Café and ordered a bean veggie burger which I brought down to the King’s Court (so I could get a salad).  We have sailed on QM2 several times and this was the first time I had gone up to the Café.  I’m not even sure I knew it existed.  In any event, the veggie burger was very good.

I spent the rest of the afternoon out on the open deck waiting for Ellen to return.

The sail away from Amber Cover turned out to be an event as lots of passengers gathered on Deck 7 to watch the departure.

Looking Back at the Pier

The view of the Sail Away from my deck chair

Tonight is both Formal Night and New Year’s Eve so we tried to dress for the occasion. 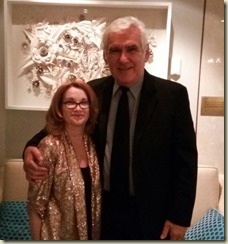 The ship was all decked out for New Year’s Eve.

We had dinner in the King’s Court Italian Corner – Cesar Salad, pasta with mushrooms in cream sauce, and a pizza with onion and mushrooms on each half. The Best.

Showtime tonight was “Rhythm of the Night” – Latin tunes and dancing – we couldn’t make it to the end because of the volume of the music.

We went to the Queen’s Room to check out the balloon drop and New Year Eve’s Ball.

We stayed until 10:30 PM (because of the loud music) and then headed to our room.