The rainy weather pattern continues. We are both on the same tour today – “Grand Etang, Ft. Frederick, and Annandale Falls”.

The Island Princess shared the dock with the smaller, Oceania Riviera.

Ellen on her Tour Bus

I boarded my bus last and took a seat in the way back by the right window.  At the last minute more passengers filled the bus and I was squished against the side of the bus as the back seat now had more passengers than seat space. I basically had to hold my breath and could turn or stretch out to get comfortable.

I ran into Ellen at the Fort, 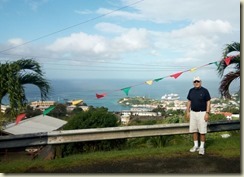 which overlooks St. George’s Bay and the Town. I switched busses (got on Ellen’s) – this literally saved my back and life. My new guide is Ladonna – who is also a restaurant owner in town (she was born in Venezuela and raised on Grenada so her restaurant is a South American/Caribbean Fusion Restaurant).

We usually have a postcard view of our ship but from the angle today, the telephone wires and power cables make it less than ideal. We didn’t climb into the fort because it felt like rain coming.  The two of us got under the overhang while the passengers who went to fort got soaked.

We got a better view of the bay and the ships a little higher up. 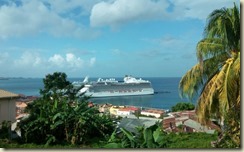 We drove through rain showers and along narrow mountain roads leaving the Caribbean side of the Island.  Along the way, Ladonna pointed out some of the local vegetation including some familiar and no so familiar trees.

Nutmeg is an important tree since Granada is known as the “Spice Island”.

The bus then headed down to the Atlantic Ocean

Fishing Village on the Atlantic Ocean

for a shopping stop at some spice vendors.

View from the Spice Shop

This was also a rest stop but the washrooms cost a dollar US so most folks opted to wait for the next opportunity, which would be Grand Etang State Park.

To get to the Park, we drove back into the rain forest – the complex has a bar, restrooms, and the Grand Etang Lake. The bar had complimentary drinks so I chose to try Stag Beer. I usually go with Caribe but I was curious (these are the two big beers in the islands). In my humble and lack of experience opinion, Caribe is the better beer – Stag seemed watered down. The washrooms were OK and free. The mist had rolled in and the lake was not visible from the viewpoint so no one ventured down the path. 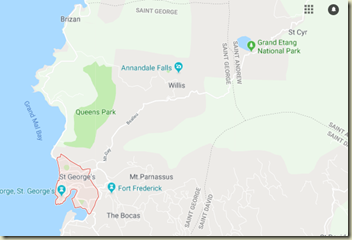 It was just a short walk from the bus park to the falls.

When we got there, we were met by a bunch of young boys, who told us they were part of the diving club, which needed public support (donations).  A few of them dove off the falls – looked very dangerous but I guess they knew what they were doing.

River Downstream from the Falls

The Falls Through the Vegetation 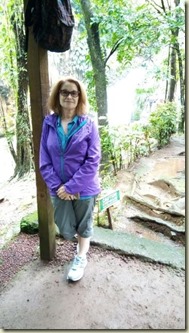 We arrived back at the ship just in time for another late lunch.

Later that afternoon, we watched the sail away from the open deck.

We also had dinner in the Horizon Court. Breaded Tilapia was the highlight on the buffet.

Tonight’s Headline Entertainer was Steven Ragatz – Ex Circe de Soleil performer.  We were too tired and passed on the show.  We listened instead to Danny Rembadi – guitar and vocals in the Wheelhouse Bar. Very entertaining and popular.

A soggy but nice day in Granada.