We did not notice the clock change last night so we were awakened by the Room Service attendant (he did not call as they usually do to tell us breakfast was on its way).

A warm and muggy day at Sea… 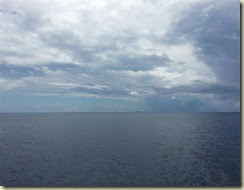 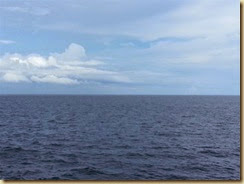 My talks do not begin until we have transited the Panama Canal so I am just a passenger until March 9.

Most of the day was spent on Deck 5 – about half finished with “Trunk Music”.

There is a new “pretzel chef” as I noticed a difference both in the design and texture of the pretzels on this cruise.  The pretzels and ranch dressing are still a major plus at lunchtime.

While we were having lunch in the Window’s Cafe, Captain Carl Smith just came over and sat down with a couple and ate and chatted with them.

Tried something different for lunch – a sandwich made with pan fried tilapia also containing sautéed onions from the BBQ buffet.  A winner.

Played trivia twice with passengers – our team got 11 of 18 on general trivia and 17 of 20 on Broadway Musicals  (missed Fame and Avenue Q and one other).  We lost both of the contests but had fun doing so. Michael and Taylor (Quest Production Cast) hosted the trivia – Michael was a hoot and Taylor had her moments.  Barb and Elmer were my trivia partners and we would up spending some good time with them on the cruise.

After dinner, we listened to Max and then went to “Who Wrote the Songs” – a couple of new numbers were added to the show. 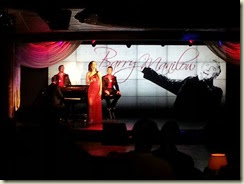 We passed on the Captain’s Toast and took in another set from Max before spending the rest of the evening in the Club Luxe.