A sizzler in the resort city of Huatulco…

Local Information.  Huatulco, Mexico’s newest Resort, is located in the state of Oaxaca in the southeastern part of the country.  Huatulco (“the place where the wood is adored”) covers 18 miles of coastline, containing excellent beaches and sea life.  In the late 16th Century, Huatulco Bay was frequented by famous pirates such as Sir Francis Drake and Thomas Cavendish.  The government of Mexico turned this little fishing village into a resort destination starting in 1983. Our ship is docked alongside the Bahia de Santa Cruz.  Overlooking the Bay, there are several Condos, some occupied and some stopped mid-construction.

No tours today so we are planning to walk around the beach area and town to see what improvements or changes have been made to the area since we were here last in March 2012.   The forecast today calls for very hot and humid weather (99F).  So the quest for shade will be very important.

We are the only ship here today. 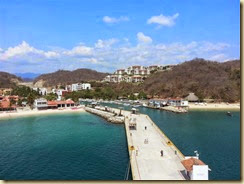 The long pier to Huatulco

There are also several Mexican Naval patrol boats making passes through the bay – I am guessing they are keeping an eye on the Azamara Quest. 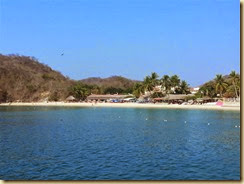 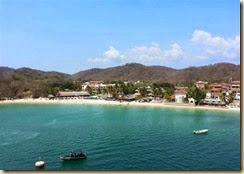 We left the ship around 10 AM and set out looking for a spa run by US Expats from California.  We met them some years ago and I am curious how they are doing. 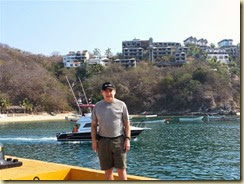 On the pier to Huatulco

The Spa was no longer there and the store is now occupied by real estate offices.  We found some “free” WiFi at a restaurant on the beach (they were hoping we would buy a beer but it was only 10 AM in the morning).  The WiFi was spotty but I was able to pick up some emails and post some pictures on FB.  We did get a nice view of the Quest from the beach 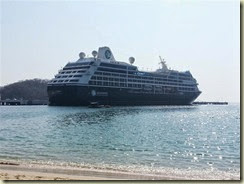 We made our way through most of the town but it was hot and it didn’t take long to realize that our best option would be to go back to the A/C of our ship.  We were back on board in time for the Window’s Cafe Lunch Buffet.

After my Veggie Burger lunch (continues to be very good), we literally stayed on the cool side of Deck 4 for the whole day.  I am making some good progress on “Trunk Music”, although I just realized that I must have missed a couple of books in the Harry Bosch series.  A character just appeared in the book that I recall from an earlier book but her history changed so drastically that I clearly missed something.

There is no Showtime tonight but there is the White Party up on Deck 9.  As part of that, there is a deck buffet.  We decided to go the Discoveries Dining Room because the menu looked very good.  We asked for the table for two by the back window.  The dining room was quiet tonight and the food – Pan fried Mahi Mahi on top of a delicious relish, grilled eggplant slice, parmesan crusted zucchini, gazpacho, baked potato, custom green salad.  The Best Dinner yet on this cruise and one of the best ever.  Really.

After dinner, we went up to Deck 9 to check out the White Party.  There were a lot of people up there and lots of dancing going on.  The singers and dancers were on stage knocking out one song after another – a non-stop concert.  Also singing were Alex (really) and Russ.  A lot of energy and not that loud. 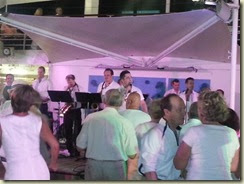 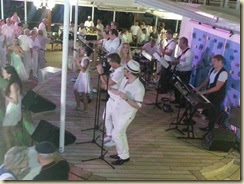 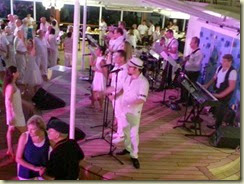 Olga was there dancing alone (where was Anton?) 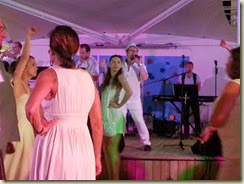 Russ was dancing non-stop around the deck but took the stage to sing a few numbers.  Russ has boundless energy. 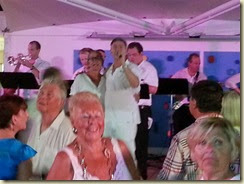 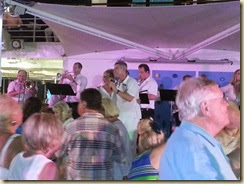 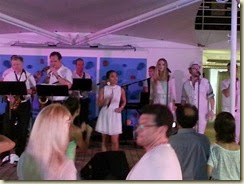 The Azamara Singers back on Stage 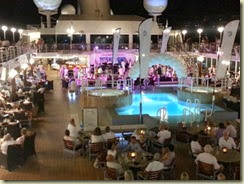 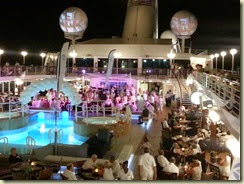 We were in white – at least Ellen was – so we were ready for our closeup – one of the passengers got a pretty good picture of us with the party in the background. 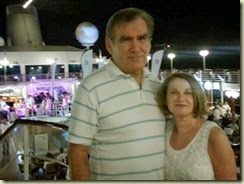 H and E at the White Party 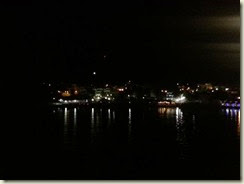 We left the party at around 10 PM just as the ship was pushing.

The seas are absolutely calm,,,