Continuing our Room Services breakfast and will be doing so for the rest of the cruise (and beyond).

Fuerte Amador is a tender port and the ship is providing free shuttles to the Albrook Mall (yes, I know) so the Mall is our destination today. 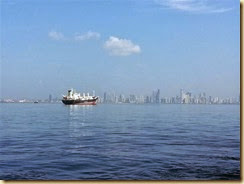 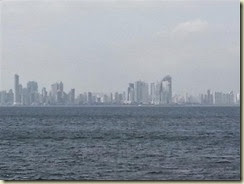 Panama City (before and after the haze)

The tender ride into Fuerte Amador was quick and calm and a few minutes later we boarded a van to the Mall, which was about 20 minutes away.  The ride took us through the former Canal Zone (we toured this some years ago).  There were some new stores and hotels but it look pretty much the same. 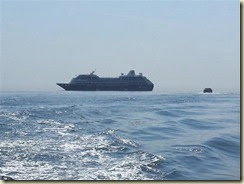 The Mall was massive and looked brand new.  In fact, it rivaled or exceeded any of the North Shore Malls back home.  It had high end store, e.g. La Coste, and was clean as can be (I used one of the department store washrooms and they were immaculate).  Not sure who shops here but I am guessing there is an ex-pat community supplying the customer base.  We hung around the “Koala Entrance” named for obvious reasons (the giant bear just inside the entrance) looking and finding WiFi. 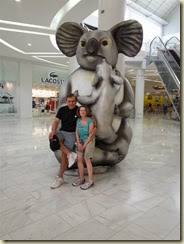 Now you see me… 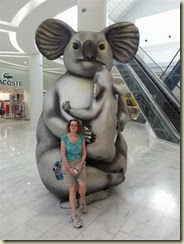 In a region of the world known for its coffee, the most prominent business near the answer is the patron saint of Colombian Coffee, Juan Valdez (Juan and his donkey were nowhere to be found).  I was told by our guide in Caldera that Costa Rica does not produce any Decaf Coffee so there is nothing for me to try at JV Coffee. 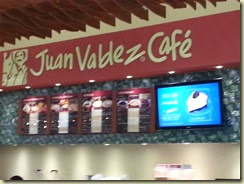 Pure Colombia Coffee at the Mall

The rest of the day was all R and R (as if we didn’t have enough of that) – with much of the ship off on tours, the Quest was quiet.  Lots of reading and napping.  We needed to rest because tonight was this segment’s “Azamazing Evening”.  The entire event was moved to the ship to avoid having to transport 600 people through the hellish Panama City traffic.

The whole afternoon had been spent decorating the Pool Deck and rearranging the seating.  When we got up there after dinner (we didn’t do the buffet), we got the last two seats on Deck 10. 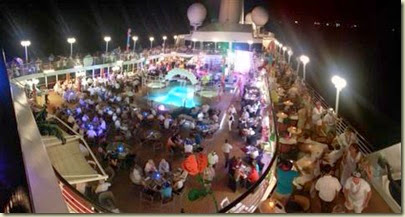 It is a long evening of festivities starting off with music from a local band, 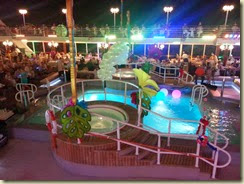 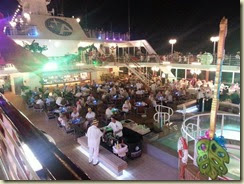 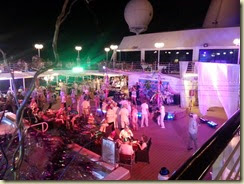 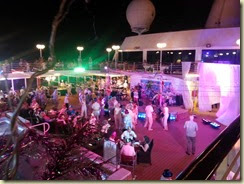 After the band, we watched a folkloric show about the history of Panama.  The characters, all in bizarre and colorful costumes, wandered around Deck 9 and 10 but never made it up to Deck 11, where we watch from our lounge chairs. 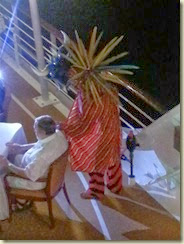 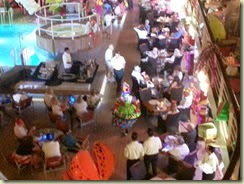 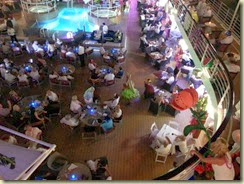 Following the dancing, the lights on the ship went out and over on the Panamanian shore, a fireworks show began – amazing. 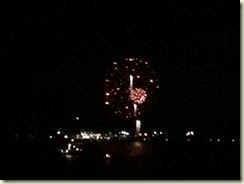 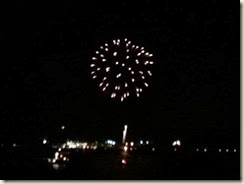 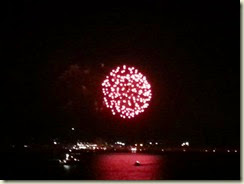 Fireworks seen from the Ship

The final part of the evening, the “White Nights Party” began with numbers from Russ and the Quest Singers and Dancers.  Some of the numbers were different from those on the first cruise.  A lot of the crowd had left but it was still rocking when we took off. 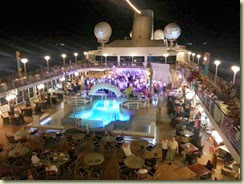 It was an amazing evening.