A much improved day at sea… 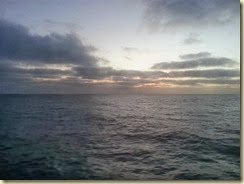 Sunrise seen from our cabin

The Quest is not due to anchor in Cabo San Lucas until about 7 PM tonight so this is essentially another day at sea.

We ordered room service again since my talk is early this morning at 9:00 AM.  Waffles, cottage cheese, and an egg white omelet comprised this morning’s feast.  Again, good and warm.

The second talk - “Cold Cases Solved” is well attended – a few more people than the first talk (about 150 people).  The talk – though one of the longest – finished at about 9:50 AM giving the next speaker, Vala Ola the Icelandic sculptor, plenty of time to set up for her talk.  We stayed for her talk – she described some famous statues and paintings (e.g. David, Mona Lisa, Venus de Milo) leading up to her own pieces and jewelry collection.  It was a pleasant and informative lecture.

We went to the Looking Glass Lounge to do some reading – Olga and Anton (the couple from Ukraine) were just finishing up their jive dance class).  We stayed for about an hour until the buffet opened up.

On our way to the Window’s Cafe, I stopped at the Pool Grille and ordered a Veggie Burger – the attendant gave me a slip and said that a waiter would bring my burger to my table in the Cafe.  Sure enough…after surrendering my slip, a burger and cut fries appeared.  I am not sure what went into the burger but it was hot, fresh, crispy, and delicious.

After lunch, we sat and read (listened) on the sunny open deck. 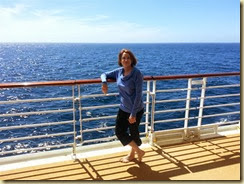 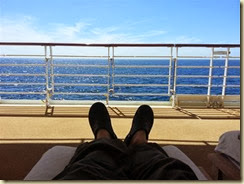 Finally out on the Open Deck

It was so nice that I slept through about 15 chapters of “Cold Vengeance”.  I had to backtrack and catch up on those chapters.  The new chairs on Deck 5 are plush and comfortable.  We stayed out there all afternoon moving to the shady side when the sun got to be too hot.  We then went back to the room to get ready for dinner.

Dinner tonight is a bit different.  Tonight is the “Azamazing Evening” spectacular.  Because of that event, both dinner venues are serving the same food buffet style.  We opted for the Window’s Cafe because it has a pasta station.  I had the cook make me a pasta with broccoli, tomatoes, sun-dried tomatoes, onions, and garlic – topped off with marinara sauce and parmesan cheese.  Perfectly yummy.

Local Information. Cabo San Lucas is located at the tip of the Baja Peninsula, situated between the Sea of Cortez and the Pacific Ocean.  The Cabo area, first discovered in 1537, had no gold but it was an active port for ships returning from the East with spices, gold, and silk.  Pirates wanting some of this booty were common in the area.  In the mid 20th Century, Cabo became a popular haven for the rich and famous and today, it is a highly successful venue for water sports and beach relaxation.

The Azamara Quest arrived in the Cabo harbor around 6:30 PM and anchored very close to the famous Los Arcos rock formation.

We were treated to the most spectacular sunset… 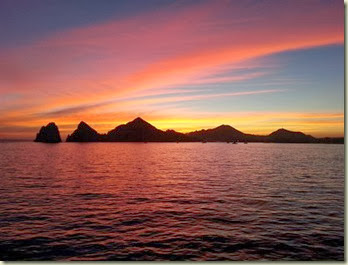 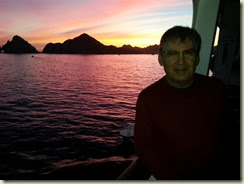 Starting at 7:30PM, passengers wishing to attend the “Azamazing Evening” will be tendered ashore, taken by bus to Ocean House, and treated to a show about Mexican History (“Step Back in Time”).  Because we are on Deck 4, we were the last group to go ashore.  The tender ride was short and the bus ride took about 30 minutes.  Ocean House is an open air venue next to the ocean and in a very ritzy neighborhood of multi-million dollar homes and villas.  There were snacks and drinks.  I purposely stayed away from food and drink as I generally do off ship.

The show was hosted by CD Russ and after an introduction by Captain Jose, 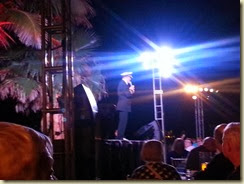 a troupe of dancers, decked out in ancient tribal costumes, acted out the history of Mexico. 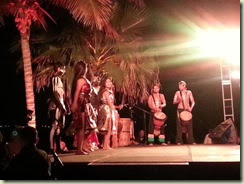 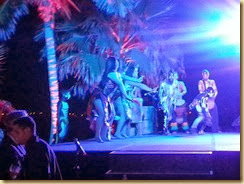 Another segment involved a pair of contortionists – very similar to the ones we see on the ship except they are not from Ukraine. 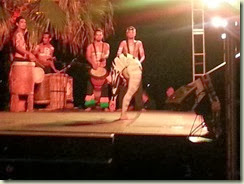 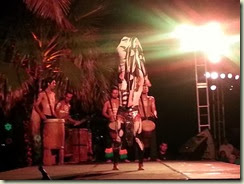 Probably the coolest segment involved the fire dancers.  A guy seemed to be unfazed by putting his hands and feet and other parts into the flame – I wonder if the flames are unusually cool (they do smoke a lot).  A girl with a flaming hoop pulled off the coolest stunts. 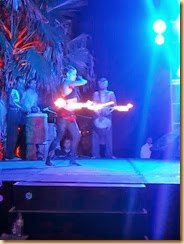 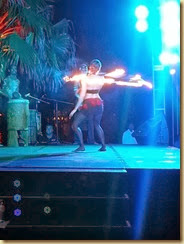 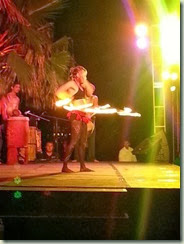 When the show was over, the entire cast came out for their bows. 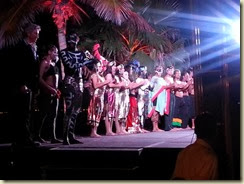 Russ and the Cast of “Step Back in Time”

Then without warning, the lights went out – that was very cool because of all of the stars now visible in a nearly light pollution free sky.  I would have been happy to check out the start for a while but instead a very neat fireworks display started.  It lasted about five minutes but, since the explosions were so close, it was spectacular.  I also found out how difficult it is to capture fireworks on “film”. 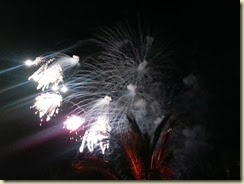 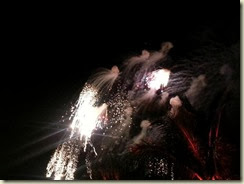 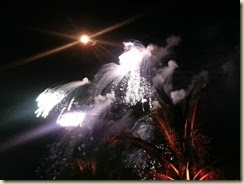 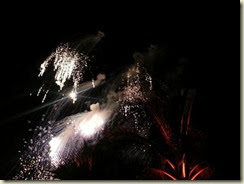 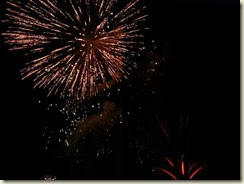 After the fireworks, the busses started loading – even though we are in Group 26, the loading process went pretty quickly.  While waiting for the busses, we chatted with folks and listened to the Mariachi Band doing “Guantanamera” (of course). 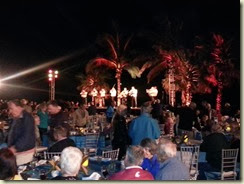 The evening was a little cool (we were all wearing our jackets).

Soon we were on our bus and then on our tender for a short hop to the Quest.  We arrived back on ship around 12:15 AM.

We are anchored so the sea is smooth.