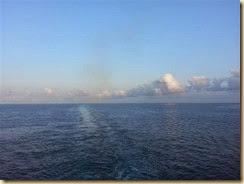 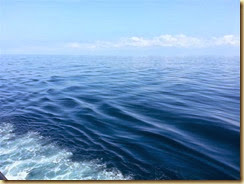 Smooth As a Lake

I went up the Window’s Cafe for breakfast today – oatmeal, scrambled eggs with cheese, a bagel, and a cheese blintz.  The best part was being able to eat out on the back deck.

Not working today so the plan is to spend most of the day out on Deck 5.

The ship has a Jazz Brunch this morning but after checking it out, we had lunch in the Window’s Cafe.

Boring as it may sound, the entire afternoon was spent on Deck 5 port watching the waves and coastal Mexico go by.

Dinner tonight featured a “Moroccan Buffet” – including:  falafel, humus, tahouleh, baba ghanoush.  Everything was wonderful and the place wasn’t very crowded because lobster was on the Dining Room menu.

At 8:15 PM, we watched Max DiFaz perform his big show - “Max DiFaz Grand” in the Cabaret Lounge.  He combined some excellent music mixing, striking graphics, and his piano skills into a highly entertaining show.  He performed music from the movies including: Chariots of Fire, Windmills of Your Mind, Summer of 42, Theme from Shaft, Maria and Somewhere, Through the Eyes of Love, and others.  It was a wonderful show. 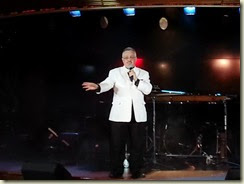 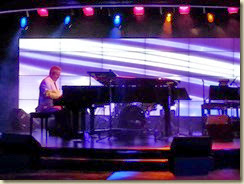 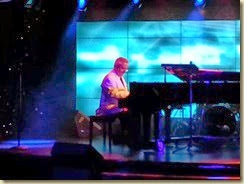 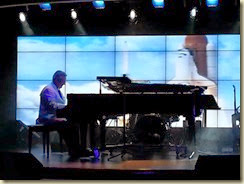 We stayed in the Cabaret Lounge and waited for the second show – a one man performance –“The Beat Goes On” - by Russ Thomas Grieve – Cruise Director Russ.  Russ is a singer dancer who spent several years playing Harry Bright in Mama Mia.  He was also in the off-Broadway Musical - “Yesterday, Once More” – the music of Karen and Richard Carpenter.

Russ put on a high energy show featuring songs from the 60s and 70s.  He featured songs by Neil Diamond, Tom Jones, and Roger Miller.  In the middle of the show, he donned high top, platform shows ($2500) made just for him for Mama Mia and danced and sung some disco numbers.  He did “Downtown” by Petula Clark (he mentioned that she was now about 82 years old and that he had heard her in Vegas about four years ago and she sounded great).  From “Yesterday, Once More”, he sung “I Won’t Last a Day Without You”. He finished his set with “You’re Just too Good to be True”.  A full house. 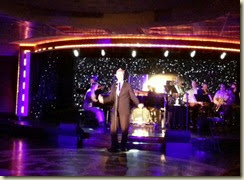 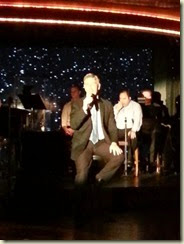 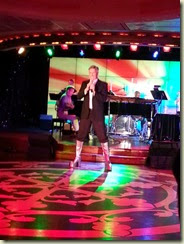 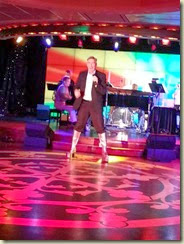 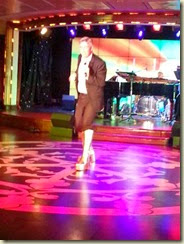 After the show, we ran into Russ outside our stateroom and he asked us if we were going to go to the Looking Glass Lounge for “ABBA Night”.  He said he would see us up there.  Well, we went and he did find us in the crowd and I was able to get this picture of Russ in full supersuit. 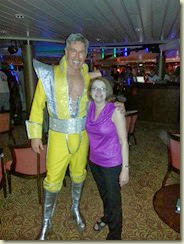 Lots of people in the Looking Glass Lounge and I love the music but at 11:15 PM it was time to go.

It was still in the high 80s up on the open deck and the seas are smooth.