The Azamara Quest has completed its grand voyage….

There is no express walk-off on this ship – also, we are the only ship at this terminal today.  Our tag is for the 9:30 AM disembarkation.  From our cabin window, I noticed a very interesting truck parked next to the ship – “Miami Diving – Underwater Ship Maintenance”. 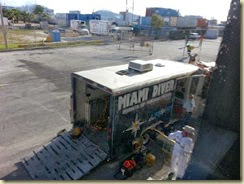 What Are These Guys Up to?

After a pretty quiet breakfast up in the Window’s Cafe (spent some time with friends we had met on the ship).  We went back to the room to wait for our tag to be called.  Before leaving the ship, I was able to get pictures of the beautiful Miami skyline. 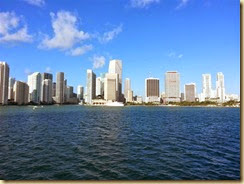 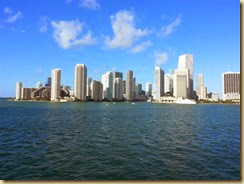 Getting off the ship was pretty quick (no Immigration, we just handed in our Customs Declaration Form.  Our bags were in the terminal and we shared a van to the airport with other passengers ($10 a person so we saved some money by not taking the ship’s transfer).

The ride to MIA was short – about 15 minutes.  We were both “TSA Pre-Check” on this flight so the time in Security was minimal.  Our flight – AA1346 – is scheduled to depart at 3:30 PM and we arrived at our Gate D-1 (yes, the last gate in the Terminal) at about 10:30.  We would have plenty of time to read and relax.  Unfortunately, the terminal was crowded and noisy (lots of kids – Spring Breakers?) but on the positive side, there were plenty of chargers for phones and computers.  The chargers, provided by Verizon, were a bit problematic as plugs were loose while in the chargers.  Eventually, we got our plugs to work and we were power heavy.

We had home made cheese sandwiches for lunch accompanied by $3 cokes and a bag of chips (also $3).

Ellen read some books and I worked on this blog while waiting for our time to board.

Today, we are in First Class so we board first – this time I took the window seat so I could snap pictures of the takeoff and flight.  The plane pushed pretty much on time and soon we were on the active runway.  The takeoff over Miami was pretty cool. 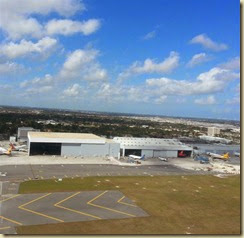 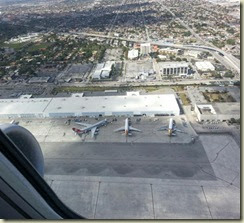 A Big Turn Brings the Airport into View 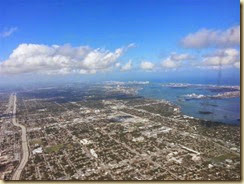 Miami and the Port Area 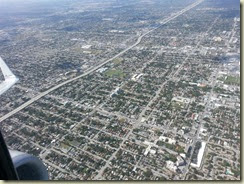 Another Turn and There’s Miami 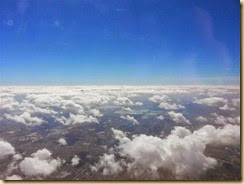 Above the First Layer of Clouds

The climb out was relatively smooth but as we made out way to our cruising altitude, there was nothing but chop – not bad chop because the flight attendants were still moving around.  The pilot came on and said that although we were at cruising altitude, the chop would continue (we were right at the cloud tops, which always means bumpy air) until we got a bit further north and he could get to a higher altitude.  That never happened; the seat belt sign was only off for about five minutes on this 2 hr 45 min flight and that was to let people take their chances and hit the washrooms. 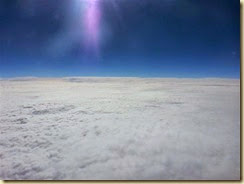 It looks calm in the photo above but it was choppy.  On the positive side, I had two excellent Bloody Mary’s along with my mixed nuts.  There was no Veggie Option for Lunch so we both ate salads and rolls.  The chocolate chip cookie helped a bit but I will have to contact American about their options for Lunch.

The flight went quickly and soon we were on our initial approach to Chicago (we were about 30 minutes ahead of schedule). 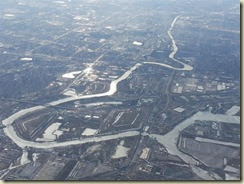 A River as We Got Closer to Chicago

The airport below might be Midway as we are about 20 minutes out from ORD. 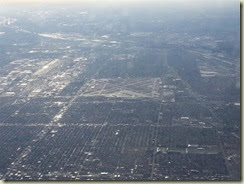 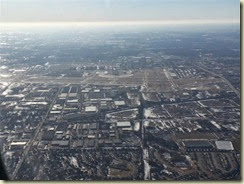 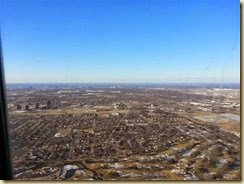 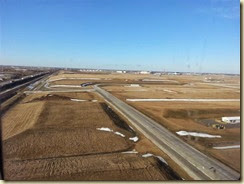 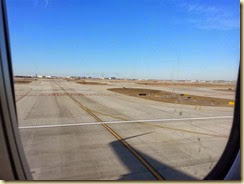 Although we landed more than 30 minutes early, we did have a gate so no penalty box today.  We got our luggage – our bags were not on our carousel but two carousels away already neatly placed on the floor.  I wonder if they somehow got on one of the earlier flights and arrived here hours before we did.  Fortunately, we have unusual looking bags so Ellen was able to spot them even from a distance.

No taxi today as we got picked up – a nice way to end a long day.

A long but enjoyable cruise on the beautiful Azamara Quest…