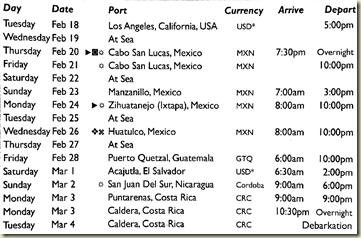 A cloudy, cool day at sea… 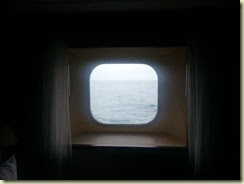 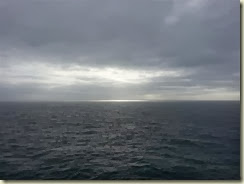 My first talk, “The CSI Phenomenon” is at 10:00 AM today immediately following Jim Howard’s talk on whales.  Since the buffet doesn’t open until 7:30 AM, we ordered breakfast from room service.  The waffles, eggs, and cottage cheese were pretty good – it helps to be on a small ship when it comes to getting your room service food hot.

The talk was in the Cabaret Lounge – only the side screens are operational due to the show requirements; on this cruise I can use a headset, which I personally like.  I was told by the AV guy to stand behind the podium because they have a fixed video camera but I said I would rather wander around the stage and interact with the audience.  When this talk goes on the air, it will be like Clint Eastwood talking to an empty chair (in this case an empty podium).

I set up quickly and had some time to chat with some of the passengers.  One of the attendees had just seen me on the Celebrity Equinox so I don’t think she will see much new stuff.

Alex gave me a nice introduction.

The talk had a good turnout.  Based on an occupancy of just under 400 people, I estimate the attendance at between 100 and 150 people..  The audience was interactive and only a few people left before it was over.  I think the series will have legs.

We had lunch in the Window’s Cafe and spent the whole afternoon in the Library reading.  I am listening to “Cold Vengeance”, Book 11 in the Pendergast series by Preston and Childs.  I am about 25 percent into the book and it hasn’t started rolling yet.

After dinner, we listened to Max in the Club Luxe – he recognized me and waived.

Feeling a bit tired so we went back to the room early (did not go to see Katy Setterfield – Headliner for tonight).

Seas are still smooth but I am ready for some sun.