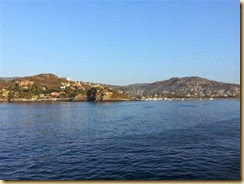 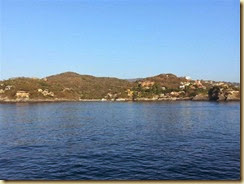 Zihuatanejo from the Quest

Local Information.  Zihuatanejo (“Land of Dark Skinned Women”) was a sleepy fishing village until the Mexican Government decided in the late 70s to build the resort city of Ixtapa about a half hour away.  This brought more people to Zihuatanejo – increasing traffic and starting a boom in real estate. Today, the population of Zihuatanejo stands at about 62,000 people.  Zihuatanejo still retains its old charm with narrow streets and colonial style storefronts.  The town has nice beaches and water sport options.

Room service to the rescue on more time…

We are both on short tours today which gives us chance to check out Zihuatanejo after we return.

I am on the “Ixtapa and Zihuatanejo Highlights” tour and Ellen is on the "Town and Countryside Tour”.

This is a tender port – my group is the first to leave on our short tender ride to the pier. 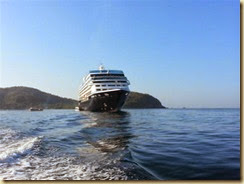 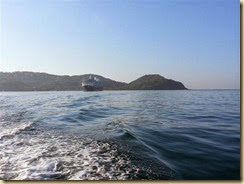 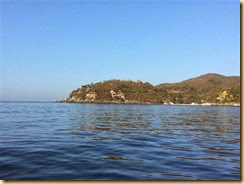 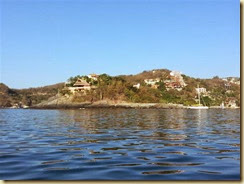 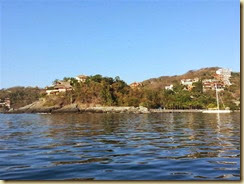 On the way in, we could see the expensive homes perched on the hills above the village.  There were some still under construction.

We had a full bus (43) and our guide was Enrique.  I could tell the minute I got on that the A/C was not functioning properly.  I shared this information with Enrique but he said there was nothing that could be done (some passengers found it too warm).

We started our tour by winding our way through the narrow streets of town on our way to a look out point.  Along the way, we passed a very familiar sight.  I wonder if my US Sam’s Card would be accepted here. 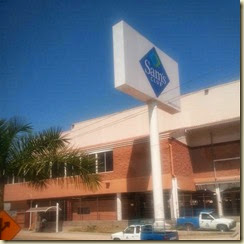 Our bus seemed to be driving very slowly – perhaps there were speed bumps or perhaps he simply was not in a hurry.  We eventually made to the look out point and the bus pulled over so we could get some very nice pictures of the bay and Quest. 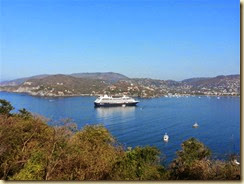 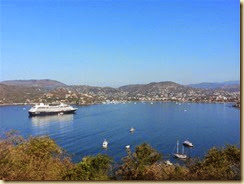 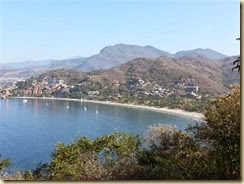 Overlooking the Bay of Zihuatanejo

The bus’s next destination was the planned resort community of Ixtapa.  We passed the Palma Real Golf Course – in contrast to Cabo San Lucas’s Golf Courses and their bright green fairways and greens, this course was a bit brown.  The guide told us that the rain for this season was about half of what it is seasonally.  He also mentioned that water is treated and recycled for watering the vegetation in Ixtapa – they need to get some more water on the fairways or the balls will roll forever and wrists will be sore from hitting hard turf.

We passed hotel after hotel until we finally stopped at the Hotel Emporio (a former Holiday Inn).  We were going to spend about 30 minutes here enjoying a drink (I had the dark beer in a paper cup). 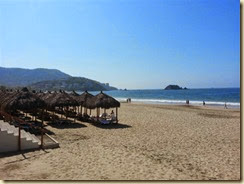 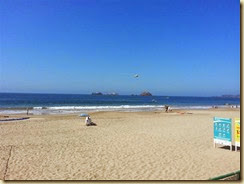 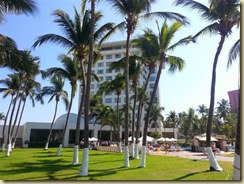 The hotel was nice but it had no WiFi.  We also were told we had to leave early (no reason given).  I told Enrique that people were on the beach and wouldn’t get back until the actual meeting time.

Our next stop was the Crocodile Preserve – where about 60 Crocs live in a protected environment.  One man has been feeding these crocs chickens and other meat for the past twenty years. 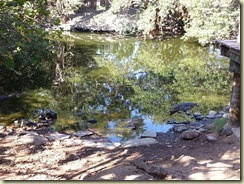 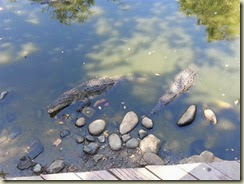 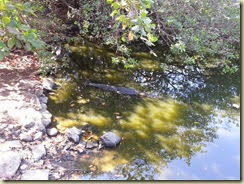 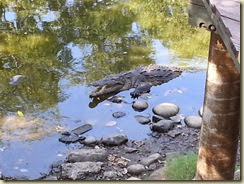 where I wandered to see what they had.  Pretty much the same fare as all of the other flea markets.

As you might expect, our final stop – about 30 minutes – was at a “Shopping Mall” and Flea Market across from Hotel Row in Ixtapa.  My first thought was that Ixtapa should have a fancy shopping mall, like they have in Honolulu in the hotel zone.  This mall – only partially occupied – consisted of real estate offices, restaurants, and tourist stuff.  I was unable to find any WiFi.  The Flea Market across the street sold standard tourist stuff – no WiFi.  It was pretty warm so I joined many of my fellow tour folks in the semi-air-conditioned bus.

Ellen’s Tour - “Town and Countryside” – the bus drove an hour outside of town over un-paved roads to reach the secluded beach of Barra de Potosi (below), where the group was treated to cold drinks. 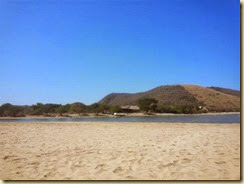 The next stop was the Terracotta production facility, where workers produced hand-made clay tile for roofs (they are paid by the tile – 20MEX- $1.50 or so per tile). 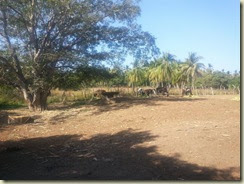 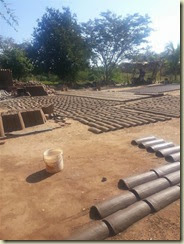 My bus returned to Zihuatanejo around 12:30  PM – looking around the bus area (there were no other busses there), I spotted a Visitor’s Center.  I asked them if I could stay there until Ellen’s bus arrived and they said no problem – the chairs were plush and comfortable, the A/C working OK, the people friendly, and the banos free. 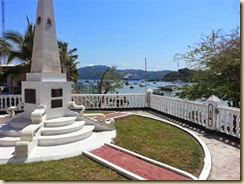 View from the Visitor’s Center

Our busses were supposed to arrive 30 minutes apart but her bus came in about 45 minutes later (we might have been early).

It was hot but we found shade and soon we also found a hotel willing to give up its WiFi key.  The signal was weak and intermittent but we were able to get our e-mails and posts done.

Recall that Zihuatanejo is the “City of Dark Skinned Women” and we saw evidence of that in the many statues of women situated around the waterfront area.  One such women represented the Mexican State of Guerrero and Ellen posed with her below. 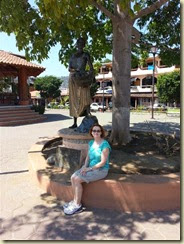 Ellen and the State of Guerrero Woman

It started to get too hot – it was in the low 90s – so we hopped the tender back to the ship.  It took me several hours to stop sweating and during dinner, I had six glasses of water.

We had dinner in the Discoveries Dining Room – Risotto Pomidoro/Green Salad with Ranch Dressing/wonderful Minestrone Soup/Sautéed Sole with mushroom risotto.  Pretty nice dinner all around.

Dinner took a bit long tonight so we went to the theater to get seats.  Along the way, I ran into Russ and Alex (along with Max and two passengers).  Russ requested that I put together a series of new presentations for the next leg due to the large number of back to backers.  I also spent a lot of time talking to the passengers about CSI and Bones – it was a fun chat.  Alex and I are going to meet before the end of this cruise to talk through the new titles.

Joey Van is the headliner tonight – he was on a couple of nights ago but we missed him due to the Chef’s Table.  He was very very funny tonight – not rib hurting funny but consistently funny – even bits that didn’t work were quickly converted in something that made you chuckle.  His show was the longest of the cruise running just over 50 minutes.

When we got back to the room to check out the Pursuit, I noticed that I was not on the program today – just to make sure I called Alex who told me that the remaining two talks would be rescheduled later in the cruise.

The open decks were warm and nice and we stayed out there until the ship departed at 10:00 PM.  The town is well lit at night, especially all of the homes up on hills.  While out there, I finished “Cold Vengeance” and, as I already knew, this book is the middle book in the “Helen Trilogy” (Helen is Pendergast’s initially dead but now alive, wife).  I will be getting Pendergast 12 when I get a chance.  I am now reading “Trunk Music” a Harry Bosch Novel by Michael Connelly. 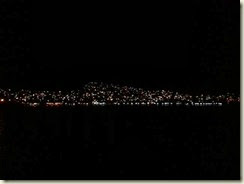