A hot day on the Atlantic Coast of Costa Rica…

Local Information.  Puerto Limon is Costa Rica’s most important port – it lies about 100 miles east of San Jose.  Christopher Columbus establish the city in 1502 during one of his later voyages.  The present city was founded in 1870 mainly as a export port for agricultural items (namely bananas).  The last time we were here, we wound up dodging bullets as police chased some kids at the closed Del Monte Plant we were touring.

The town of Puerto Limon is a short walk from the pier so today we are exploring the town.  Well, we decided after a few blocks that the heat combined with not that much to see, would cut short our tour of Puerto Limon. 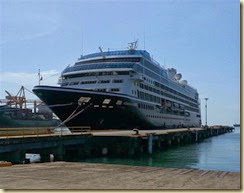 There was a crew member working on the port anchor and I got him to smile for a photo – lucky he didn’t fall off. 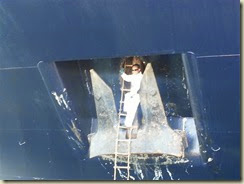 The town of Puerto Limon did not have much to see but it did have a Pizza Hut. 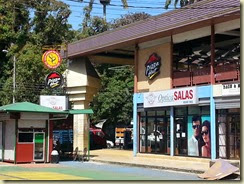 On the way out of security, we had stopped at the Port Office because we heard there was WiFi.  There was and Ellen was able to pick up her e-mails.

We went back to the ship to pick up Ellen’s Kindle so she could download some books.  When we returned to the Port Building, the WiFi wasn’t working – no emails and no books.  I was sure all that was needed was to reboot the system but no one working in the office would let me touch it.

That being the case,we made out way back to our cool ship and hung out on the open deck for the rest of the day.

I captured a beautiful sunset from the ship. 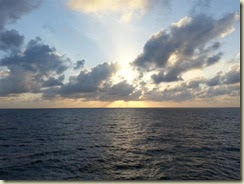 After dinner and after Max, we watched “Danzare – To Dance” again  (this time Nigel Marven and his crew were filming the show).  At the end of the show, Nigel and Russ had a little chat for the cameras along with some video of visiting a sloth sanctuary.  The show had a little more zip and Olga was always in front of Nigel’s camera during the filming. 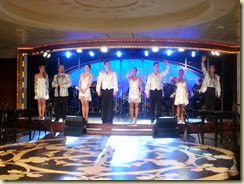 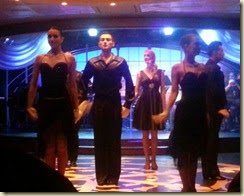 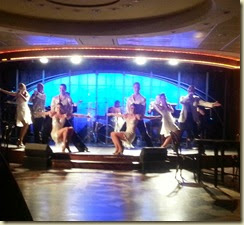