Into our routine now for breakfast – Room Service

My third talk - “Mystery of the Romanovs” – is at 10 AM following Jim’s talk about volcanoes.  Jim ran a bit late so I started a few minutes late (ending at 10:54 AM) but still giving Stella Sarmiento(the jewelry expert) enough time to set up and go.

The attendance had increased to about 70-80 percent full – still hard to estimate the crowd – maybe 150 people (found out that there were several Brits and Canadians in the crowd today).

Lunch was in the Window’s Cafe and once again I had a Veggie Burger (very good) along with onion rings (sinfully good).  The burger comes so quickly and so hot – I don’t how they do it (the burger seems to be made of barley and rice but tastes a whole lot better than it sounds).  The other great item for lunch is a soft pretzel (just like at the A Cafeteria) dipped in Ranch Dressing (which tastes like it has real buttermilk in it).  Yummy.

The seas are very smooth and that brings out the dolphins.  A whole school(s) of dolphins were playing in front of the ship and although I shot tons of pictures, I only got a couple of good ones.l 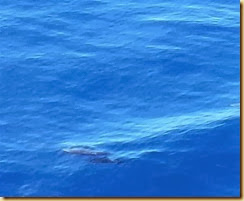 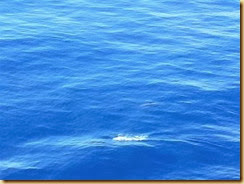 Dolphins Frolicking of the Starboard Side

The weather outside is perfect today so we spent the whole day on Deck 5 – I made some progress on my audio-book and may actually finish it before it auto-vaporizes.

Ellen took a break and came back to tell me that we had been invited to host the “Chef’s Table” tonight in Prime C (we had indicated an interest in doing so but we hadn’t heard).  We called Alex to confirm so he could print our names on the menu.  We also went up to Prime C to talk to the person in charge tonight to let him know about what we could eat on the menu – he indicated that he would work out appropriate substitutes.  Tonight’s theme is the “California Menu”.

We arrived at Prime C at 6:30 PM and met our tablemates – one couple was from San Francisco and had been regulars at the talks; another couple was from Vancouver BC and had been watching the talks on TV; a third couple lived in the forest of the Pacific Northwest (what made them special is that the husband was a huge fan of UCLA – he might have gone there in the early 60s but it was difficult to tell); a single woman from California rounded out the group.

We sat at a long table with bar stools – the meal consisted of six courses each with an associated wine.  Each wine was explained by Boban, a Sommelier from Macedonia.  The meal was very good consisting of an eggplant based appetizer; a roasted tomato soup; a goat cheese fluff (just for us); California Sea Bass; a palate cleansing grapefruit sorbet; and a chocolate macadamia nut dessert.  The final wine offering was a pair of fortified wines that tasted a bit like Manischewitz (of course, we didn’t share that with anyone).  The meal took four hours to complete but it was very interesting and fun. 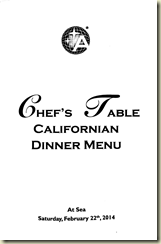 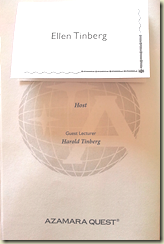 The conversation at various points touched on forensics (spent a bit of time on the Amanda Knox case) but for the most part, other items were discussed.  I brought up the background behind clinking of glasses (to check for poison) only to have the same story recounted by the Sommelier host.

Once the meal was finished, we headed, tired but fed, to the room.

Tomorrow we are in Manzanilla.  It is Sunday so I wonder what shops will be open.