A very blustery day as we continue up the Baja Peninsula. 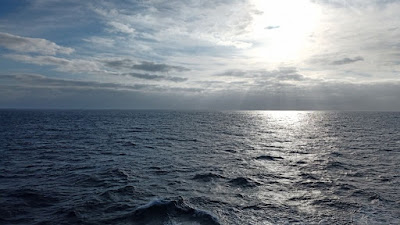 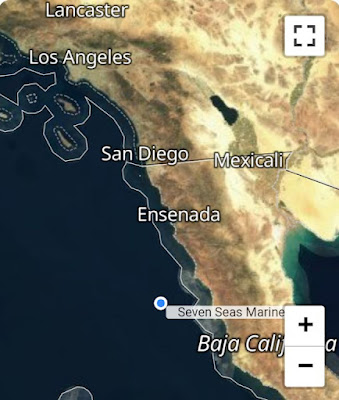 There are rain showers driving some hardy people off the pool deck.  The wind was so bad last night that the table on our veranda was turned upside down by the room steward to keep it was going airborne and into the Pacific Ocean.

Today, I tried to shake things up at breakfast by getting up to La Veranda just as it opened and ordering an omelet with cheddar cheese, onions, and tomatoes (I like to get there before all the ham omelets hit the pans).  I had a bagel with the omelet.  Based on my experience with breakfast on this cruise, I have to say that I was disappointed with the omelet and there were very little in the way of veggies and the only thing I could taste was the cheddar cheese.  I should have stayed with my pancakes, which have never let me down.  I did supplement the omelet with some scrambled eggs but that didn’t really help.  The coffee was good.  And while the breakfast wasn't that great, I did get a seat with a wonderful view. 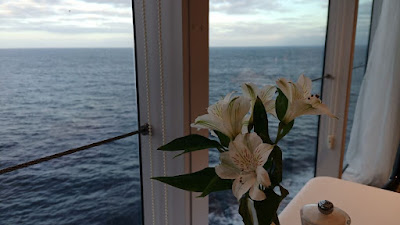 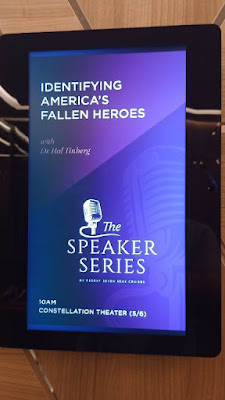 at 10 AM in the Constellation Theater.  The attendance for the last couple of sessions has been constant and I still think that a lot of guests are watching on TV.  The talk ended on time, and I answered a few questions before heading out.  One of the more interesting comments from a passenger (from France, I believe) was that my speaking voice had improved the ringing in her ears.  A first for me and probably for all speakers.

We had lunch up in La Veranda – we sat inside because of the conditions outside.  Today, the ship was having an Italian buffet and pasta station instead of the normal Grille faire.  We both had the pasta with cream sauce and veggies.  It was Ok but we have had better pasta on board.  I also had some tuna stuffed tomatoes and salad.

It was difficult finding a warm place to read.  We decided that the “Observation Lounge” – Deck 12 Forward would be out best bet and it was.  While watching the waves and ocean do their thing, we sat in very comfortable seats.  I ordered a signature cocktail – “The Voyager” – which consisted of orange juice, raspberry liquor, among other things.  The drink, named after one of the Regent ships, was really good.  Note to self: If you get on another Regent Ship, check out the signature cocktails.

Since most of our clothes had been laundered, packing was easy.  All we needed was what we were going to wear at disembarkation.  We were packed up pretty quickly since we hadn’t really packed to the limit.  We received our Red 1 Luggage tags, which would get us to LAX via bus.

We were both not up to dealing with any restaurant tonight so we ordered a Margherita Pizza along with Veggie Spring Rolls from Room Service.  They were both really good, especially the Spring Rolls.  I should note that the Room Service menu is quite extensive and because the ship is small, the food arrives hot and good.

We asked Room Service to retrieve our dishes and we headed for the theater for James Wing’s second show.  There was something not right with James tonight – I think he was sick.  He had trouble speaking, the volume was low, and he kept drinking from his water bottle (which he did not do when we saw him last).  His delivery, maybe due to his voice issues, was not as good and so his timing was off.  I really think he caught a bug.  Hope to see him again – he is very funny.

I put our bags out before 10 AM.  The ship is really rocking so hoping we can sleep.