Our first stop on this cruise is usually the last stop of a lot of our other cruise.  We usually stop in Ensenada for just a few hours to sign the Jones Act documentation so we can return to the US.  But today is a full day in Ensenada.  I actually have a lecture at 2:00 PM in the Constellation Theater so we are not going ashore.  Besides, it is kind of chilly today in northern Mexico.

I was up early enough to catch the sunrise from the veranda as we approached Ensenada. 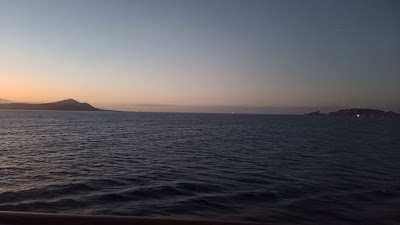 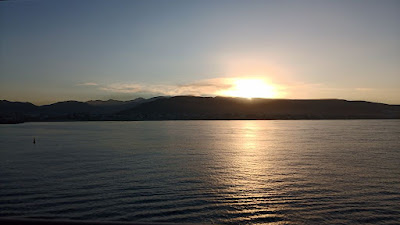 We actually had breakfast together this morning – neither of us slept too well due to the change in our routine and other unknown factors.  The breakfast buffet in the La Veranda Dining Room is quite nice.  I had the pancakes of the day (blueberry and banana) which I covered with cottage cheese and jam. Pancakes here are made to order and brought to the tables.  I also had the scrambled eggs.  Both items were delicious and deserving of a photo. 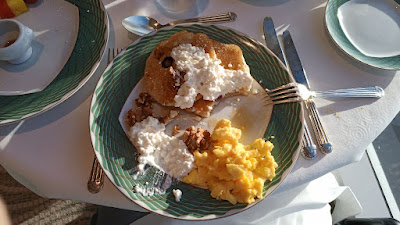 I grabbed my computer and went to the Coffee Connection and had my iced decaf mocha   (very good) and went over my talk, “The CSI Phenomenon: Forensics and Television”. The talk was advertised both in the daily schedule, "Passages", but also on video screens in the elevators. 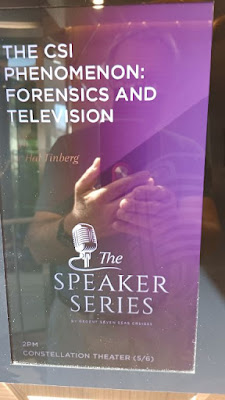 There was still a lot of the morning left so we checked out the ship a bit more.  Because if was cool today, the pool deck was essentially empty.  However, it did have shade and would be a good place to go when it got warmer. 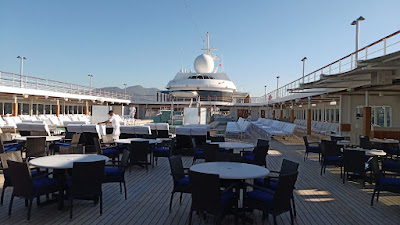 On the Sports Deck (Deck 12, I think), we found both a mini-golf course 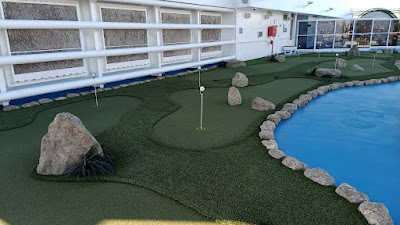 and a golf practice cage.  I couldn't resist hitting a few balls and was careful not to hurt something - there was a lot of cruise left to go.  In the second photo, you can see the flaw in my swing - too much over the top and not enough turn and off plane. 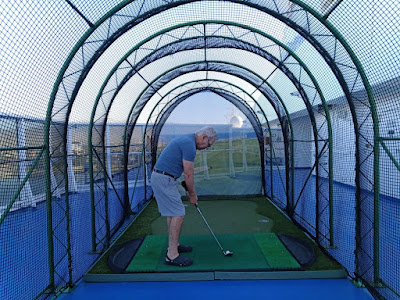 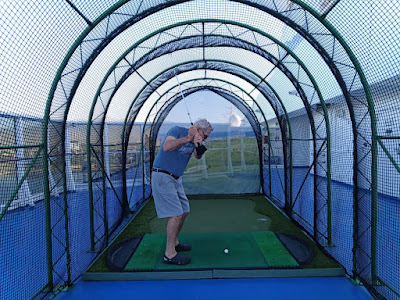 And finally, no cruise would be complete without the iconic "Ellen and the Railing" photo.  Excellent as always.

We had a nice sit-down lunch at the Compass Rose Restaurant. 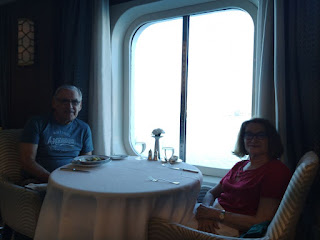 Usually, on ships, the restaurants are not open on port days but here on Mariner, this one was.  I had an Impossible Burger and a salad.  They were both good and we had a very nice seat by the window and away from people.

I made the executive decision that I would lecture in dress shirt, dress slacks, and a tie and no jacket.  I had sort of cleared that with Jude when we spoke yesterday.  I showed up at the Constellation Theater at 1:40 PM and met the AV guy, who set up the system is about a minute.  There are two screens in the theater.  The backdrop screen that is used for images as the orchestra or singers and dancers are performing and a drop-down screen that is HD quality.  My slides looked better on that screen than on my laptop. 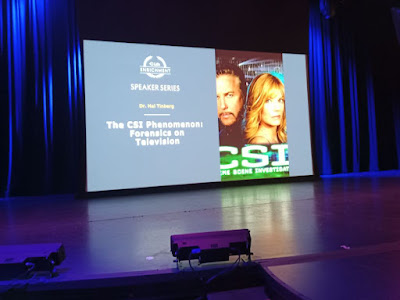 I was told by the AV guy that I had to lecture from the area in front of the stage (the stage itself was off limits).  I also knew that the lectures were on TV, but I didn't want to be stationary during the presentation - the AV team will figure it out.

I chatted with some of the guests while keeping my distance.  Everyone seemed nice and friendly.

The turnout for this talk exceeded my expectations (couldn’t tell how many people). Jude gave me a fantastic introduction 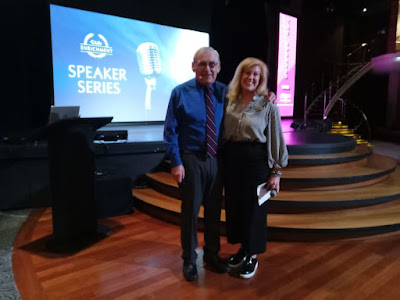 and we also had this very entertaining spontaneous banter. 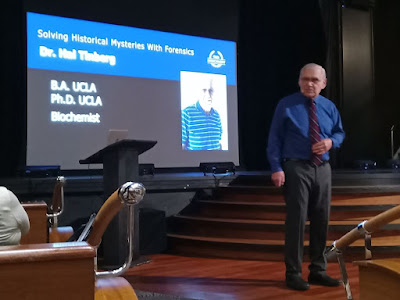 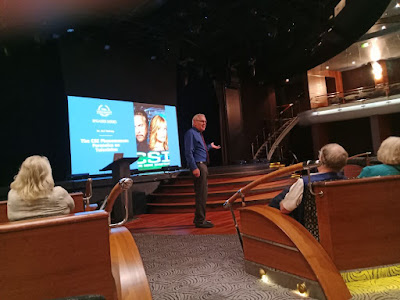 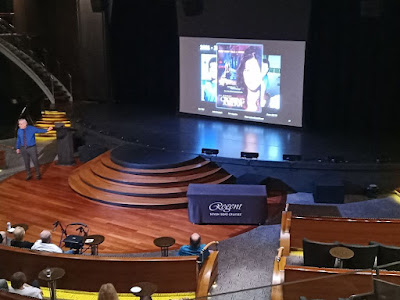 The talk went well and ended at 2:48 PM – it would have ended sooner but for the extended introduction.  The audience seemed pleased, and I got some nice feedback.  I also ran into Jude later who said she was very happy with the way things went.

We hung out on our balcony for the rest of the afternoon.  I got some very nice pictures of Ensenada from the veranda.  There were many new buildings since we were here last, the most prominent one being a new hotel.  Missing today was the huge Mexican flag that graces most of the major ports.  The next time we get back here, we will, if we have enough time, check out the updated Ensenada. 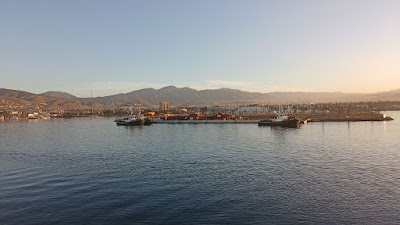 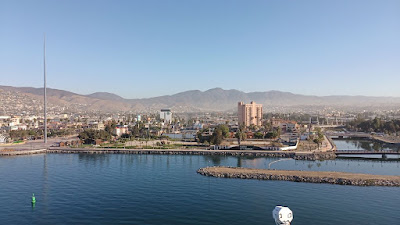 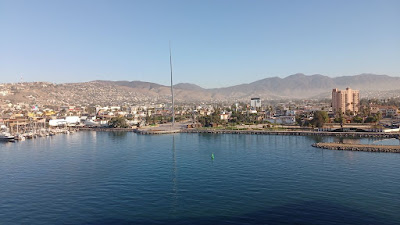 Although it was almost a normal length port day, the sail away was an early one at 3: PM.  We watched it from our veranda. 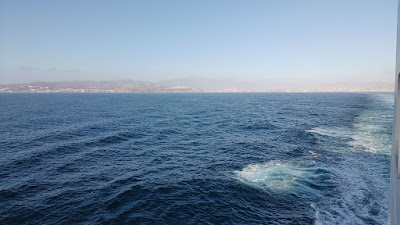 Tonight, we had dinner in Sette Mari, the Italian Restaurant that is the La Veranda during the day.  We wanted to get a table away from people and wound up at an undesirable table near the waiter station.  We won’t make that mistake again.  Dinner here is a process.  The server brings several appetizers to the table along with a basket of breads.  There is bruschetta, deep fried mozzarella balls, big chunks of parmesan cheese, olives, and fried zucchini.  There is also olive oil and balsamic vinegar to dip the breads in.  The best bread is the focaccia which is perfect for dipping.  The only appetizers I didn’t like were the zucchini and the olives.  After you order the main dish – tonight it was gnocchi pesto and cannelloni, you head to a small buffet filled with all sorts of Italian items and salad.  I also discovered a new item – “Peppadew”, which are marinated picante peppers stuffed with mozzarella cheese – the peppers (I thought they were tomatoes until I looked them up) themselves are perfectly marinated and spicy but they are really good.  I also like the chunks of parmesan cheese.

The main dishes were very good – the tomato sauce is slightly sweet and light.  I liked it.

We sampled some of the desserts along with coffee and tea.

Tonight’s show was the first production show, “Tuxedo”.  It features the songs of the Rat Pack, etc.  The Regent Singers and Dancers are finishing up their six-month contract and this is their final voyage before vacation.  There are six boys and six girls.  Of those, three of each are vocalists.  There is an extra girl and guy vocalist if needed in the number.  The dancers are all great and some of the singers especially the tall brunette is also terrific.  The two male singers weren’t that strong but did better when in a group.  The numbers were OK, and we sat in front so Ellen could see.

We got to our room late – the show lasted a full hour.