We slept pretty well and went down for breakfast.  The breakfast was served by the staff.  There were no waffle makers or sweet rolls.  There were two kinds of scrambled eggs (real eggs make in their restaurants) along with potatoes and breads.  Not really representative of the kind of breakfasts we usually get at a La Quinta, which has always had waffle makers and pretty good breakfasts.  I would say that this breakfast would fall in the lower half of the "breakfast included" meals at hotels we have stayed at.  The view at breakfast was the array of car rental stores across the street and the sun trying to peak over the buildings along Century Blvd. 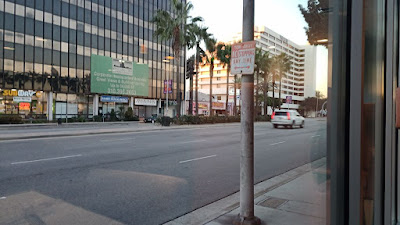 At 11:00 AM or so I called for an Uber to take us to the Port of Los Angeles in San Pedro.  The UberX cost us $31.97 and I added a $5 tip because he came right away and found our ship at the port. There were several ships here today including the Navigator of the Seas.  We won't have to check any manifests as we had checked in online and had a suite assignment.  We parked very close to the porters, who took our bags, and we were off to check in.  By the way, here's where are ship was according to Google Maps.  The ship is actually in the water. 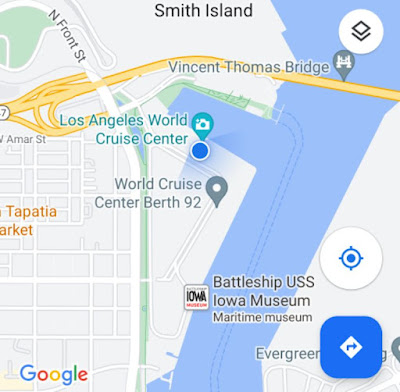 The check in was quick – Ellen told the people I was a guest entertainer (which I am) so we went into a different line. The clerk scanned our boarding passes. We had to fill out our vax information – on the honor system as we did not have to show our official vax cards.  We were on the ship in just a few minutes.  We checked in with the Maître D’ about dinner reservations.  We were told that we would not be able to get reservations in the two Specialty Restaurants – Prime 7 and Chartreuse.  After checking out their menus, that will not be much of a problem for us.

We had lunch in La Veranda Dining Room on Deck 11.  The buffet was very nice and I tried the salad bar (great Ranch Dressing), some pizza, and pesto pasta made to order.  We couldn't get a seat on the open deck but it was a little cool so inside was OK. The Stella beer enhanced the meal.

NOTE - A word about masks.  There was no masking requirement on the ship and there were very few masks to be seen.  After our last experience and the fact that our most recent boosters aren't at full efficacy, we wore masks when we were around people.  Seems prudent until more data come in during the cruise. 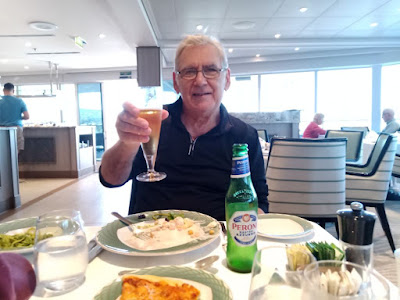 After lunch, checked out a bit of the ship waiting for the suites to open up for guests.

We went to Deck 5 – Where Destination Services and Reception are located – to see if we could find the Cruise Director, Jude Day. (Note:  Jude used to be a CD on a large Holland America cruise ship for several years and just joined Regent a few days ago).  It turns out she was in her office, and it also turns out she is from the Chicago Area.  She is a very friendly and quite different from some of the CDs I have dealt with in the past. She said I would be in the theater for my talks and that the talks should not run beyond 50 minutes.

We spoke to the crew member at the Destination Services desk to inquire about escorting or going on tours.  Let's just say that he process on this ship is complicated.

The suites opened and we dropped our carry-on stuff off – also, our bags arrived so we will not have to purchase any logo wear on this cruise.  We are in Suite 779, which is starboard aft – there are a few suites more aft than ours including the ones that face out the back of the ship.  The suite is very nice 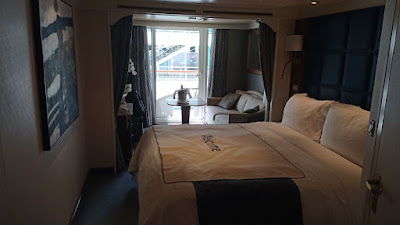 – it has a walk-in closet with tons of hangers, 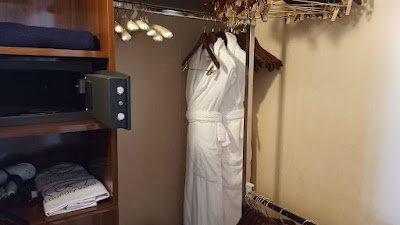 a huge bathroom with a soaker tub. 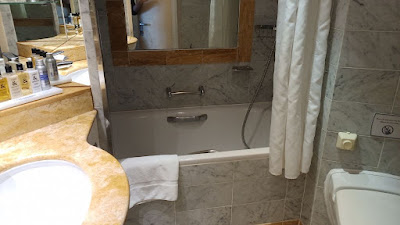 It also has a fridge loaded with soft drinks and beer (there’s Bud in there now but I will ask for Stella from our room attendant, April).  April came by and introduced herself and explained a bit about how the room works and the laundry system.  She said she would tend to the room three times a day – probably excessive.

I got off of my feet for a little while and tested out the bed. 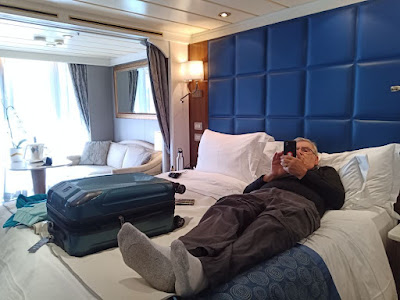 I thought that this ship is one of the “R” (Renaissance Cruise Line) ships sold to a number of cruise lines – Azamara and Oceania, for example, but after some research, it turns out to have a different backstory.  Mariner is a “R” ship but evolving from the defunct Radisson Cruise Line.  The Mariner is the same size as the Azamara Journey, for example, but the floor plans are quite different.  This makes the Mariner seem so much larger. One of the major differences is that the Mariner is an all-suite ship – a veranda for every guest.  The entire Regent Cruise fleet are small ships with most of the ships accommodating about 700 passengers.  Details on the Seven Seas Mariner.

The Mariner underwent a major refurb in 2018 with all of the public area carpets replaced and the suites updated with new carpeting and furniture.  The ship looks new.  It also had a series of glass elevators that travel up and down in a multi-floor atrium (Deck 5 to 12). 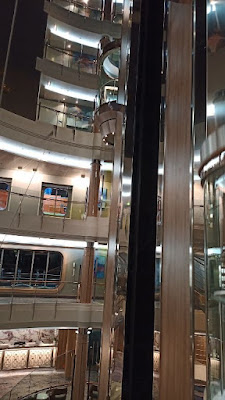 There’s a circular stairway in the atrium as well.  The theater is totally different – instead of a cabaret layout (like the Cabaret Lounge on Azamara), the Constellation Theater is a proper theater with two levels. 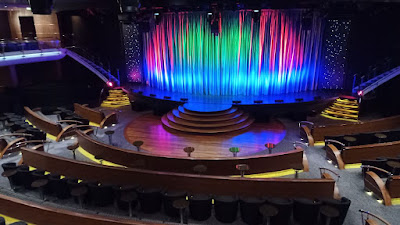 I haven’t been able to find out the capacity of the theater, but it might be able to hold everyone on the ship.  The other difference is that there is only one show per night and that’s at 9:30 PM.  That schedule isn’t the most ideal for us, but it does take advantage of the size of the theater and also allows guests to have a leisurely dinner since the restaurants open at 6:30 PM.

Other differences include the total absence of chairs on the open decks (like Crystal).  Who needs those chairs when everyone has a balcony and the chairs on the pool deck are so comfortable?  There are several lounges – Horizon Lounge, Stars Lounge, and the Observation Lounge.  There are two piano entertainers and one singing duo on board, but they play at times which conflict with dinner and the show.

Another stop on our tour was the Coffee Connection, the on-board coffee venue.  I had the barista make me my signature iced decaf mocha latte. 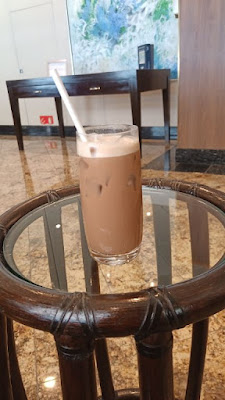 The drink was made perfectly.

While waiting for the dining room to open. we ordered drinks in the Mariner's Lounge, which is adjacent to the restaurant. Our apricot and Midori Sours very good drinks. 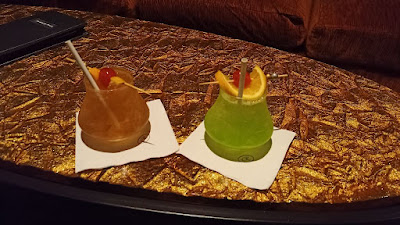 The regular restaurants are open seating venues.  We had dinner in the Compass Rose Dining Room.  I had the Cesar Salad and San Marsano Tomato Soup – the salad was good, but I was not sure about the soup.  I had the Mushroom Risotto as my main dish.  Ellen had the Sea Bass.  The restaurant is very nice – all geometric – very Craftsman style.  The service was good.

We hung out in the lounges until the show started – tonight is a Variety Show whose purpose is to introduce guests to the entertainment on board.  We saw performances by Cross (never found our his first name) a pianist, a singing duo, Boogie and Kasha, Cherisse Martinelli, the Social Hostess on board, and the Orchestra and Regent Singers and Dancers.  Jude also indicated that there were two speakers on board – Archeologist James Kus, and me, who wasn’t named but she did explain the area I would be speaking on.  Dr. Kus, who also went to UCLA, seems to be a permanent member of the crew just like some of the speakers we’ve met on the Hawaii cruises.

The show ran to around 10:15 PM or so we started off way off our usual schedule.

Even though we are on Deck 7, the room does pick up some of the engine vibration.  More of an issue is the fact that we are right above the Horizon Lounge.  As with everything on this ship, the music in that lounge starts late and finishes late.  Earplugs seem to take care of most the noise.  It will be manageable.