Cruising the Pacific Ocean on our way down to the tip of Baja California.  It is getting warmer as we head South.

I had another nice pre-dawn breakfast in La Veranda.  I don't consider it being in a rut but I once again had the delicious pancakes and the heavenly scrambled eggs (I don't know what they do to make them so good - maybe it's best not to know).  Another positive thing about this ship - breakfast is served at 7:00 AM on sea day or about a half an hour earlier than on Azamara ships. I'm an early breakfast person so the half hour makes a difference. 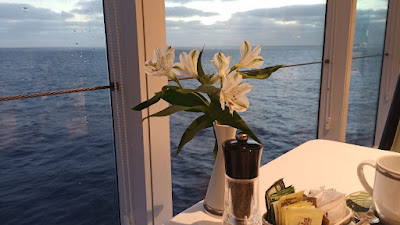 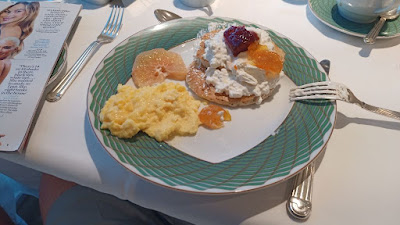 I also had a great table on the port side of the ship and was able to watch the sunrise unfold. 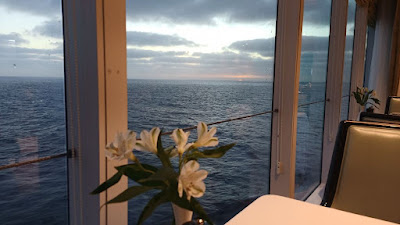 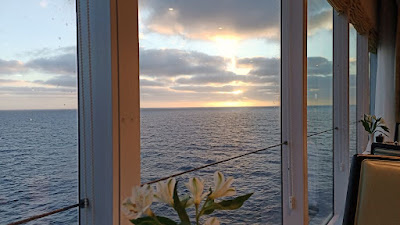 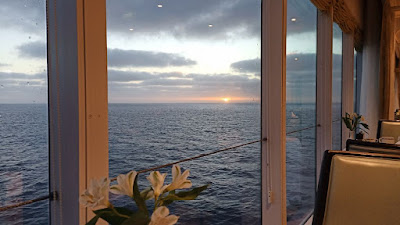 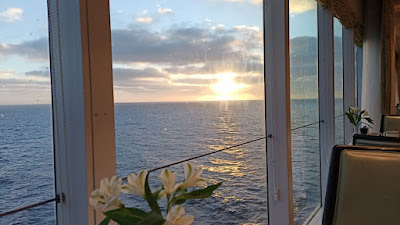 After breakfast, I went to hear James Kus speak about the “At the Tip of the Peninsula – Cabo San Lucas” in the Constellation Theater.  He included some videos, Google Maps, and some information on the indigenous people that populated Baja California. He also had slides with a lot of words which he read.  We have differing styles.  He had an OK turnout maybe just a fewer people than I had.

Today, we ate lunch in the Compass Rose Dining Room.  I had an Impossible Burger, which was well prepared and delicious.  I finally tried the skinny fries which were also good.

My second talk, “The Mystery of the Romanovs” 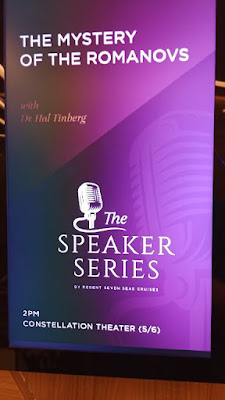 was at 2 PM in the Constellation Theater.  Again, the crowd could not be estimated but the attendance was better than the first talk.  The talk went well – no one left early.  I also spoke with a couple in the front row.  The man told me he was 95 years old (he was using a walker) and that he had been physically active until about three years ago when arthritis suddenly changed everything.  His wife, who understood Russian, said my grammar on the Russian phrase in my talk was incorrect - I told her that several Russian speakers had corrected this phrase over the years.  I'm not going to change it because the next person will deem the new version as incorrect.

Before dinner, we went out on the open deck to watch the sunset (and the Moon) and I got another iconic picture of Ellen. 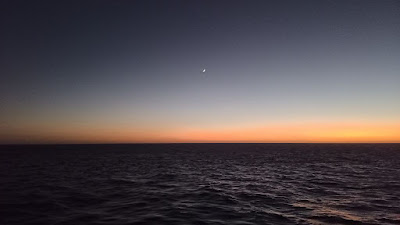 Dinner was also in the Compass Rose Dining Room.  I had the "make your own pasta" option.  I opted for the pomodoro sauce, which was very good.

We went to the Mariner’s Lounge and listed to Pianist Cross while waiting for the show.  While there I had one of their mojitos, which was made with Sprite.  Very good. 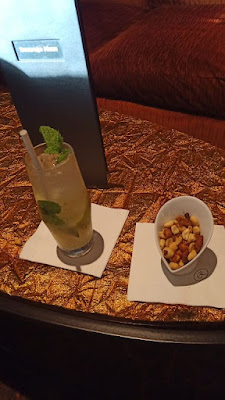 Cross plays from 8:45 – 9:30 PM.  We stayed until the set was over, so we wound up sitting in the balcony for the show, which featured old friend, Tom Franic, previously of Princess fame.  We stay for just a few minutes of the show because we have seen it several times.

Tonight, the clocks move forward to put us on MDT and also the local time in our next stop.