Another beautiful day on the Mexican Coast. 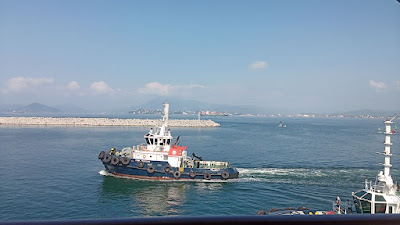 Slept better last night, I think.  Also continued to have a great breakfast in La Veranda. The staff taking orders for pancakes are now trained to fetch me some sour cream for my pancakes (cottage cheese and jams are already on the line).  The best meal of the day.

We are on tour today (not escorting but actual civilians just enjoying the ride and sites) – “Colima and Comala” – a six-hour activity involving two long bus rides of about 90 minutes each.  The meeting time in the Constellation Theater was 11:15 PM; lunch is part of this tour (we think we did this tour about four years ago, but the description was a little different).

We met our group – Bus 1 – on time and started our journey to Colima.  The pier in Manzanilla is very long but it does allow me to take a nice shot of the Mariner 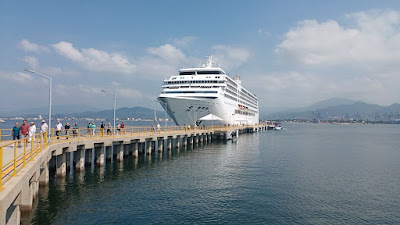 and then of the massive and iconic Blue Sailfish (the symbol of the town) from the end of pier. 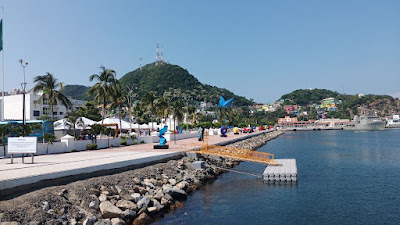 Bulkhead was empty when we got on the bus.  That was a good thing at first but as people got on it became uncomfortable because of the number of people up front.  We wore masks on the bus – still a few days to go on this cruise.  Our guide was constantly chattering about all sorts of topics and was also a bit difficult to understand.  I reminded him that we would need a veggie option for lunch and he said he would take care of it at the restaurant.

The speed limit in Mexico is 80 KPH or 48 MPH so it takes a while to get anywhere even on the highways.  We went through the town and then into countryside and then into the surrounding mountains.  About an hour and a half later we were in the decent sized city of Colima.  Here's where we started our tour of the town. 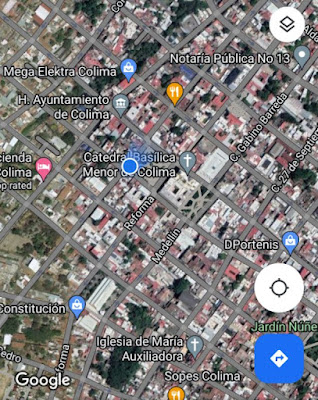 We stopped at the town square and the group took a tour of the archeological museum.  We did a quick run through the museum – I did get a picture of a skeleton replica of a smaller carnivorous dinosaur (mini T-Rex) 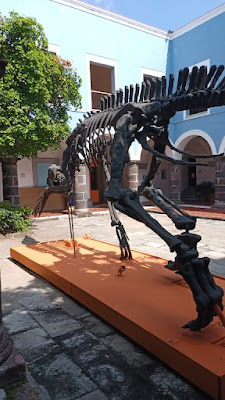 - and then spent the rest of the time in the park - Libertad Garden - looking for shade. The garden had very nice plants and flowers, 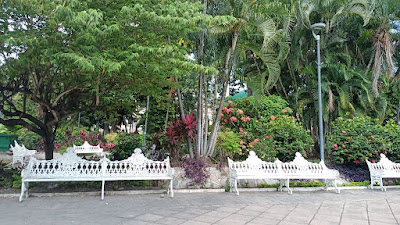 a very neat statue on a bench, 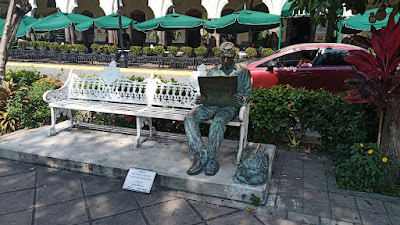 and a nice gazebo. 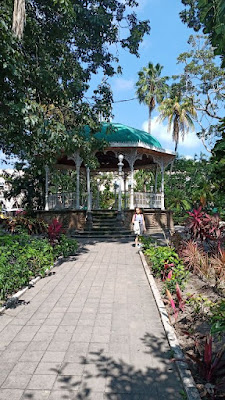 The Cathedral Basilica of Colima is situated along one side of the park. 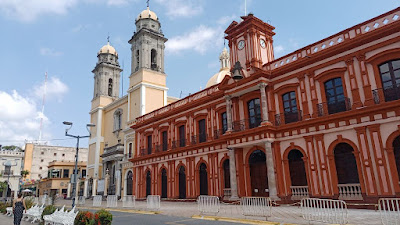 Some people were getting hungry and thirsty, but water was not provided, and food had to be purchased from storefront food places along the park.  Some of the tour went into the hotel at the square (where the washrooms were).  We found nice seats under an umbrella which kept us out of the sun.

Once everyone was fed and watered, we got back on the bus - original seats - and continued out tour.

Our next stop was the town of Comala and the archeological dig underway there. 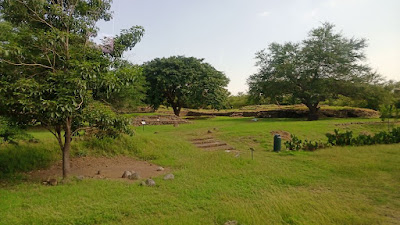 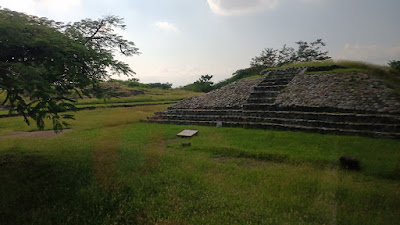 We actually opted to stay on the bus where we met a couple from Los Angeles.  We spent some time chatting with them.

Finally, we were on our way to the town square in Comala and our lunch venue (I think the restaurant was called Don Comalon but I'm not sure). 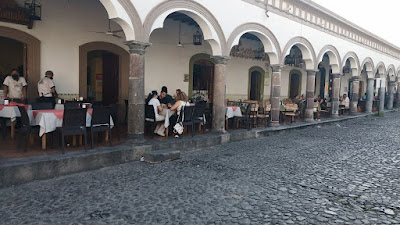 By this time, it was 3:30 PM and folks were hungry.  We checked with our guide, and he arranged for us to get vegetarian items.  The restaurant was the exact one we ate at four years ago when we came here on the Grand Princess; kind of makes sense since Comala is not that big a town.  The couple from the bus joined us.  I had a Modelo beer with my meal and the items served were identical to those on our previous visit.  The first course was vegetarian – guacamole on a crisp tortilla along with tortillas containing potatoes.  Our tablemates really wanted meat, so the waiter brought them that in a second course. I also asked for cheese enchiladas and more guacamole, and both came and were good – the cheese enchiladas with mole sauce were especially good.  We had an hour to eat and we didn't feel rushed.

While waiting for the bus to show up at the meeting place, we spent some time in the town square checking out the vendors.  I got a picture of the town sign from the back 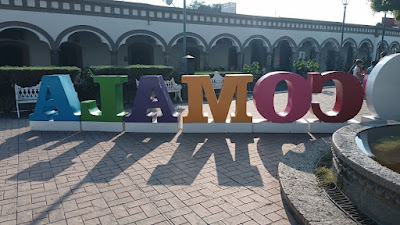 and our tablemates took a picture of us (we have so few together). 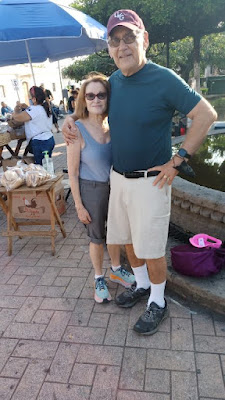 A few minutes later, we all boarded the bus to return to the port. On the way back, we took seats in the back of the bus so we could spread out and be away from people.

The ride back was a good hour and 40 minutes and that was followed by that long walk down the pier (I took another picture of the ship in the gloaming). 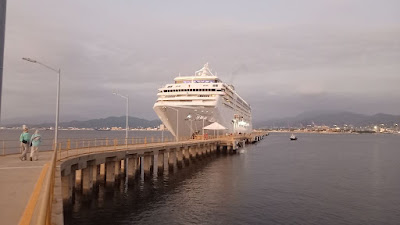 We were the second to last people to board (a mobility challenged couple came in last).  The ship departed soon after.

We were too exhausted to eat at the restaurants, so we ordered tuna sandwiches and egg sandwiches from Room Service - the good was pretty good.  We were also too tired to attend the Production Show – “Broadway” – a show we would usually not miss.

We spent the evening reading on the veranda.  That was really the only choice after this long day.