Another long night – this time, the motion of the ocean contributed to the lack of sleep.

Here's our location in Mazatlan. 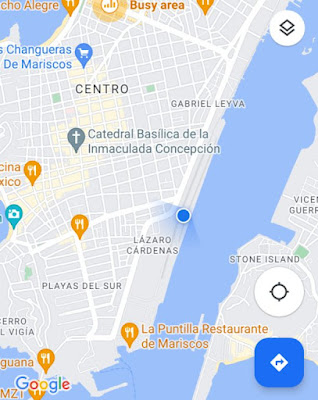 Another wonderful and consistent breakfast in the La Veranda Restaurant.  The pancakes made to order are always available even though each day features a special non pancake item. I ordered plain buttermilk pancakes and I had them with a couple of over medium fried eggs.  I also tried the oatmeal.

No excursions today but we did want to get off the ship.  We grabbed our driver’s licenses and our suite cards (that’s what they call them on this ship) and headed for the gangway.  It turns out that this ship uses facial recognition for leaving and re-boarding.  You simply stand in one place and the scanner is positioned to capture your image (you can actually see the image).  The light goes green and off you go.  Very high tech and very cool.

We did take the complimentary – and shock-less – tram to the shopping area near the port entrance.  It produced one huge bump that I thought would require another visit to my orthopedist, but the pain did not last.  The “Beauty Shop”, the smallest spa in the world was still at the end of the mall and the price was still $40 an hour.  There were two new women working in there (I guess the previous owner finally reached retirement age or else decided to sell her place).  We decided not to have treatments and instead browsed the shops - Ellen was interested in the silver earrings and rings.  While we didn't get into town to photograph the city sign, the shopping mall had an abbreviated sign, which will have to do. 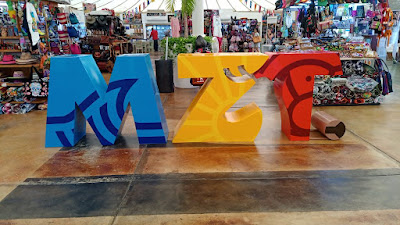 The shopping run was unsuccessful, and we went back to Mariner for a nice lunch and spent the rest of the afternoon either on the pool deck or on our veranda.  The latter proved to be a good choice since our veranda was on the shady side of the ship and the air temperature was perfect.  The view wasn't terrific due to the commercial buildings dominating the pier, but I still got some nice shots of Mazatlan. 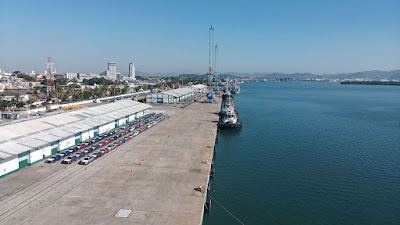 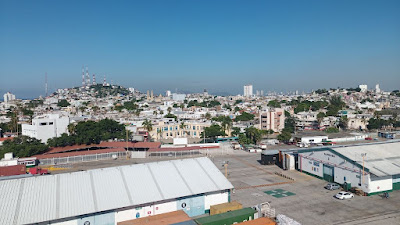 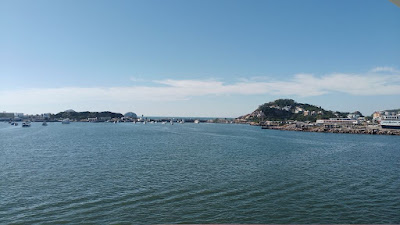 We watched the sail away from our veranda.  I was particularly interested in getting a picture of El Faro de Mazatlan, the second highest (not tallest) lighthouse in the World (next to the one in Gibraltar).  The lighthouse itself is two stories tall but it sits on a bill - Cerro de Creston - at the entrance to the bay that is 515 ft high.  The lighthouse uses a 1000W lamp. 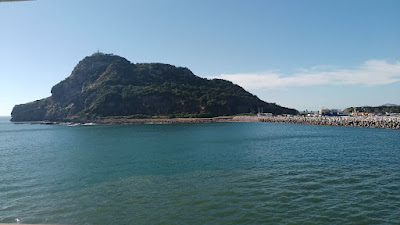 We had dinner up in the Sette Mari – I really like those appetizers – tonight I tried the eggplant parmesan as my main course, which was very good.  I have also become addicted to dipping focaccia bread into my olive oil and balsamic vinegar mix.  I could do that at home and I just might.  The meal takes a while because the wait staff waits until you’ve finished the appetizers or soup (if you order it) and other items from the buffet before delivering the main dish.  There are desserts on the buffet, and you can get coffee and tea.

When we passed by the Atrium and the glass elevators, we noticed that the multi-deck spiral staircase is held up by a pair of steel cables.  A very interesting way to construct the staircases. 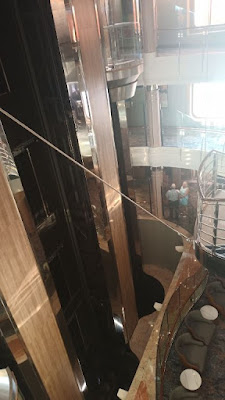 Tom Franik was the Headliner tonight – we decided to skip the show and stay in the Mariner Lounge for the Evening.