Up early again (of course) and looking out at a beautiful sky and sea. The temperature outside is dropping pretty quickly as the ship makes her way up the Mexican coast to Los Angeles.  Another wonderful breakfast of pancakes and scrambled eggs in La Veranda.  I am speaking at 10 AM in the morning on the way back so the restaurant is out.

We are just off the coast 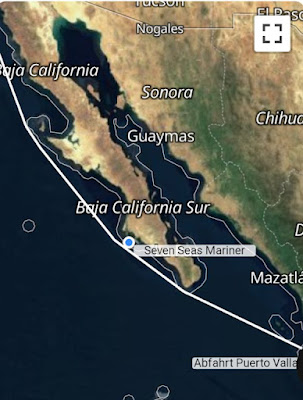 - the Baja Peninsula is off the starboard side. 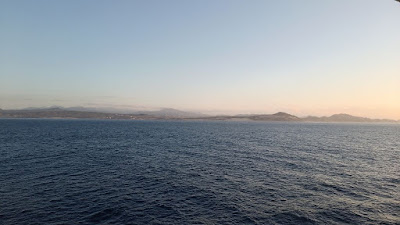 Talk no 4 is “The Lost Dauphin of France” in the Constellation Theater. 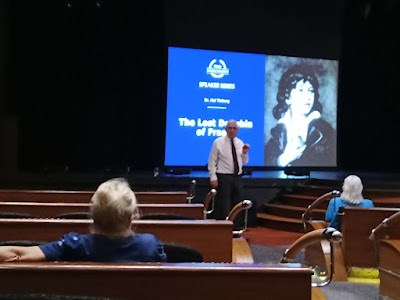 I got there a few minutes early and since it takes about a minute to set up the computer, I have a little time chat with guests (at a distance).  The folks in the audience are always personable.  I also think that there is a sizeable audience watching me on TV – especially the morning sessions (the photo above is deceptive - the place wasn't empty).  No matter – the talk ran less than 50 minutes, and I was out of there pretty quickly.  I should mention that my knee and leg seem to be holding up to the hour long standing.

We had lunch inside La Veranda because it is quite cool and breezy on the open Ocean. I had another Impossible Burger – this one was prepared perfectly (the last one was a little overdone) and even though I asked for potato salad, French fries appeared instead (they were fresh hot and good).

There were very few warm locations outside – one possible place to sit and read was the open terrace outside of the Horizon Lounge.  That area was pretty well shielded from the breeze but not perfectly.  We stayed there most of the afternoon.  Ellen certainly looked comfortable. 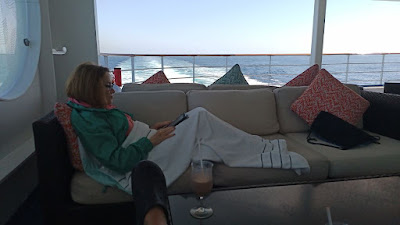 I ordered an iced mocha latte - not the ideal drink for a chilly day on deck but it was good. 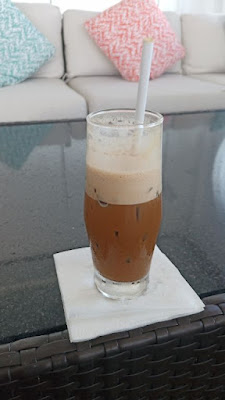 We had dinner once again in Sette Mari and, this evening, scored a very nice window table. We went pretty much when it opened, and it was not that crowded.  In addition to the great appetizers, I also tried the Minestrone Prima Vera tonight.  The soup came nice and hot but instead of the barley and garbanzo beans advertised, it was mostly cabbage.  Nonetheless, it was good.  The main course was a vegetarian lasagna in cheese sauce – it was a little cheesy for me.  I made do with the appetizers and Peppadew peppers (still spicy and good).

We listened to a bit of piano in the Mariner Lounge and then headed off to the theater for the show.  We got those good seats we had the other night behind the last row.  But just as we were getting comfortable a man in a wheelchair asked us to move down so he could be on the end.  Of course, we did that but as we tried to get some distance between us, he and his wife kept inching closer.  But unfortunately, they talked through the performances.  The show – “Blazing Boots” - involved rock versions of country songs – of the first five or so songs, I only recognized one song.  The singers and dancers all looked great in their cowboy and cowgirl gear, but the show was louder than the other shows and the people next to us kept talking.  We stayed for half of the show and then departed for the Coffee Connection for a late-night cookie and coffee and tea.

While sitting and drinking our coffee, Jude passed by and waved and then stopped and wanted to know if I wanted to join her for her morning show.  I said OK (if I had known ahead of time, I would have dressed better) and we wound up chatting about my background and tomorrow’s talk for about 10 minutes. 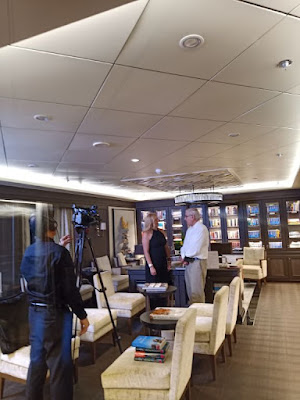 She is really easy to talk to and incredibly nice (I told the guests during the interview that she was the best CD I’d sailed with – it’s true).  I left and she continued with her show, previewing tomorrow’s (“today’s) activities.

Then it was time to call it a night.