As is generally the case, I was up before dawn through no fault of the ship or the comfort level of the room (we do not appear to have a neighbor on either side of us so that certainly helps).  Puerto Vallarta, probably my favorite Mexican port looked pristine and peaceful right before dawn. 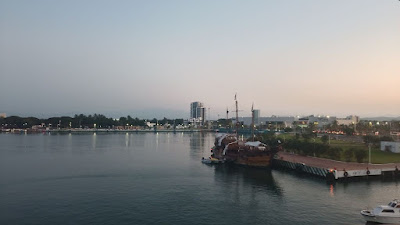 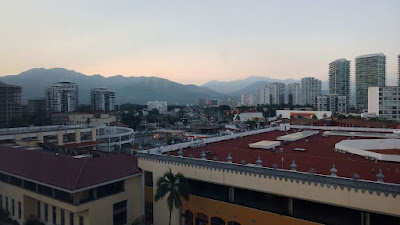 Here's where we are.

I waited a while until La Veranda opened for breakfast.  I once again ordered the buttermilk pancakes.  The woman taking my order has figured out my pattern so she said she would bring the sour cream along with the pancakes.  The rest of the breakfast had the cottage cheese and jam on top of the pancakes (just like home but better).  Also, the scrambled eggs from heaven completed the meal (I also included some grapefruit slices).  Yummy - I can’t say it enough.

While at breakfast, I watched the NCL Encore come in – she parked next to us – she probably had five times the number of passengers we had.  We had the best berth. 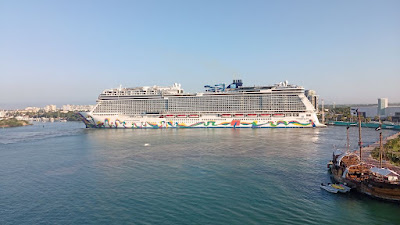 I went up with Ellen a little later and just had some coffee while she had her breakfast.

Mariner is docked right next to the massive and new (pre-pandemic new) cruise port complex.  It was quite an effort to find out way out of the complex because the point is to keep passengers in the shopping area as long as possible.  We finally found our way out of the mall and wanted to see if the spa, we had visited several times in the past had survived the pandemic.  Yegos Spa is literally across the street from the port. 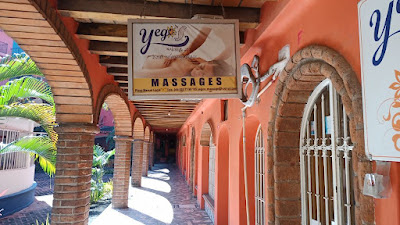 We got there around 9:45 AM not knowing when they opened.  They were closed and it almost looked like they were closed permanently.  The man who owned the trinket place next door said he would call them and see when they would open.  He said 15 minutes and then a second man just wandering around gave me his phone and told me to talk a Carmelita who worked there.  She also said 15 minutes.  It actually took until about 10:20 AM or so until the first person arrived (Carmelita) – we went inside and a few minutes later, the owner, Martha, arrived (even though I had been here many times, I didn’t recognize her – she looked a bit different and spoke more Spanish than usual).  Ellen and I both opted for the 70 min massage and defoliation special.

The place was clean, but I wore my mask the whole time (not taking any chances).  We both had great sessions although I don’t think they actually went 70 minutes.  Still, considering the price and quality (both of our sessions were excellent).  We tipped each of the therapists $10 and that seemed to be OK with them.  I put their number in my phone, but I don’t know when we will be by this way again or if they will be here when we do.

We spent all our money at the spa and Ellen had wanted to buy some items from the guy next door.  So, we went back to the ship and got some more cash and a credit card and went back to the shop.  He had put away some items and we purchased them.  On the way back to that store, we ran across a coffee shop called “Shekinah” (the name must mean something other than the female agent of God).  Their coffee was 138 pesos for 500 grams.  That came out, according to Google, to $6.81 cents or $6.18 a pound – a pretty good price (other coffee places on this cruise wanted $17 for 10 ounces).  We went back to Shekinah hoping to buy two bags of coffee, but they had only one.  I bought that one and my bank app confirmed the price.  Authentic Mexican coffee.

I didn't get a chance to get an authentic City Sign, but I did get the one in the cruise terminal shopping mall. 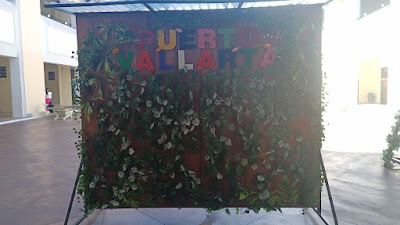 The ship was getting ready for the big Halloween Party tonight. There were orange and black balloons everywhere (the official colors of Halloween I guess). 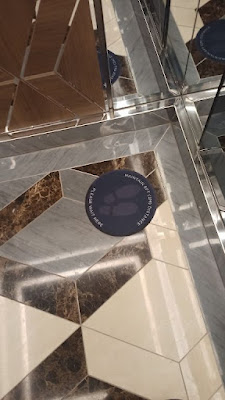 - kind of bogus since there isn't any way to achieve 6 ft of separation on these elevators).  BTW, I am wearing my mask in the elevators whether or not I have anyone with me.  Also, there is a four-person limit in the elevators, but I'm sure no one is really paying attention to that.

We had lunch on the La Veranda veranda – there was little breeze, and the temperature was perfect.  We could see the shopping center across the street complete with both a Walmart and a Sam's Club. 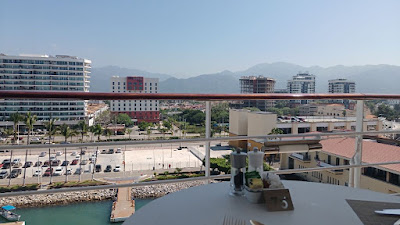 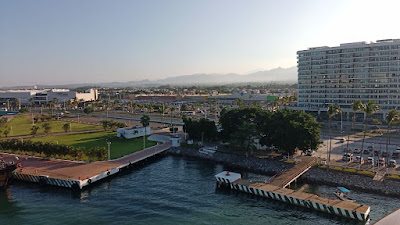 I had the other signature dish (besides the Impossible Burger) – the Ahi Tuna burger along with a small salad and potato salad.  This is not really a burger but a Tuna steak on a sesame seed bun and topped with a very tasty orange sauce.  I had it with a Stella beer and it was de-e-e-licious.  Our table, in the shade was right up again the back railing so we had a super view of Puerto Vallarta.

After lunch, we made use of our terrific veranda and the view of both the Bay and the NCL ship. 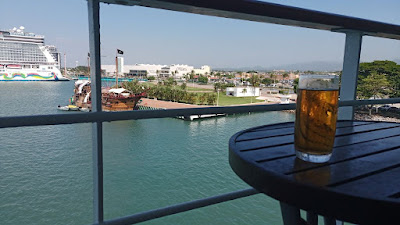 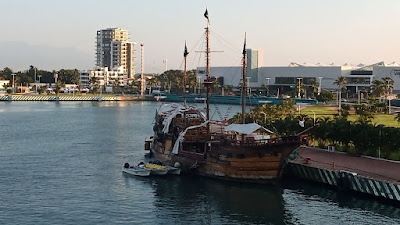 We stayed on the veranda and watched the sail away. 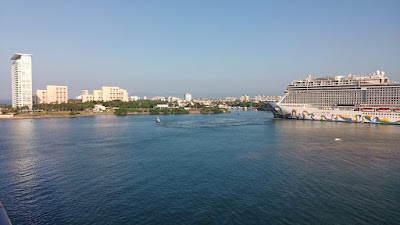 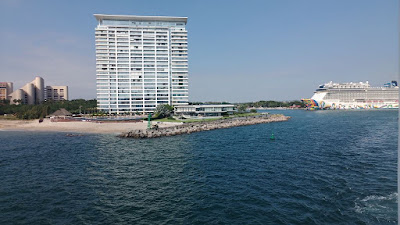 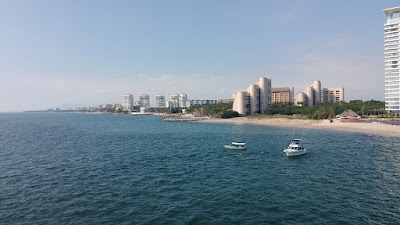 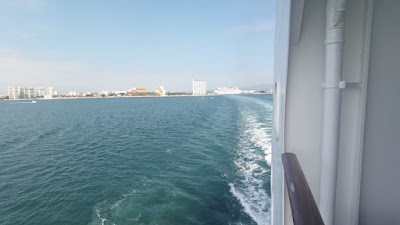 Tonight, Ellen and I were asked by Cherisse Martinelli, the Social Hostess, to host a dinner with passengers traveling alone.  We joined our dinner companions in the Mariner Lounge around 6:45 PM for a cocktail hour.  Our group consisted of an older woman, Amy, from Florida, a not really older woman from Arizona, and a mobility challenged younger woman from somewhere in the South.  They were all very personable and the conversation flowed easily.  The problem was that the dinner service was slow, and it took nearly an hour to get our entrees.  Ellen had the sole and I had the salmon with a baked potato and spinach (it was good).  We all needed to eat fast because we wanted to see the show tonight.  So, no dessert and a sprint, sort of, to the theater.

Comedian John Wing was the headliner tonight; we had never seen him in all of our travels.  He’s Canadian but now lives in Southern California.  His shtick involves comparing how things were when he was a kid to now because, at 63, he considers himself an alien.  Not on this ship.  In any event, he was very funny, and we are looking forward to his next show on the last night of the cruise.

We next went to the Halloween Party in the Horizon Lounge at 9:30 PM.  The pre-party venue looked like this. 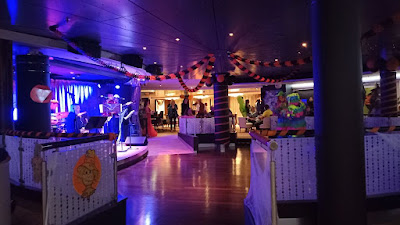 But, in a short while, place was packed, and the dance floor was sardine city with dancers, singers and passengers within each other’s space. 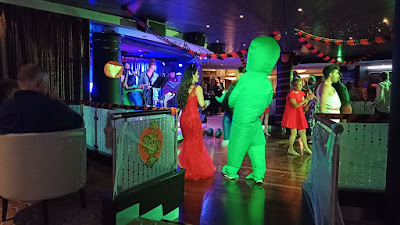 Just a few months ago, this would have been an archetypical COVID super spreader event.  We did not wear any masks but tried to stay away from people (only counted two masks in the entire lounge).

Cherisse and Jude both sang some songs and were joined by the lead singer in the production group. 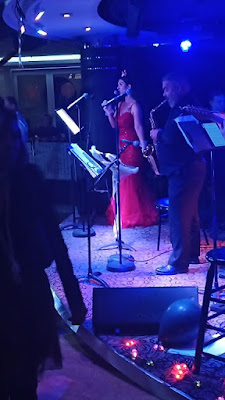 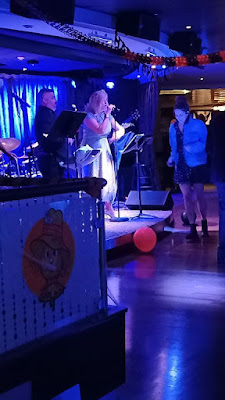 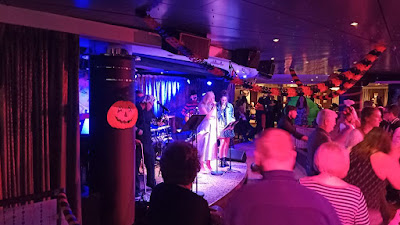 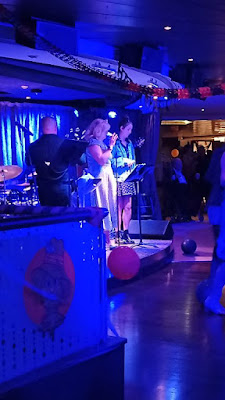 and the rest of the singers contributed to a lively evening. 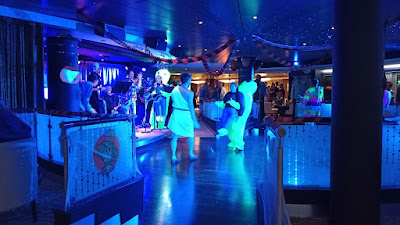 There were some passengers in costume – the entertainment staff was all in costume.  After a while, we decided the risk was too great and headed for open space and air.  We stopped by the Coffee Connection for some coffee and cookies.  It seemed like everyone on the ship was at the party, another good reason to not stay too long.