The room was quiet through the night and we both got some sleep. As the sun was just rising, I went down first to check out the included breakfast.  There were a few cars in the parking lot (maybe the rest were on the street) or maybe the hotel was underoccupied and that's why it was quiet. 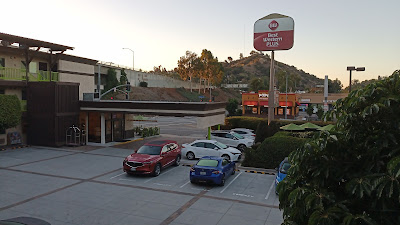 For a spartan hotel, the food was pretty good – instead of the standard waffle maker, the hotel offered an appliance which produced a “pancake waffle” – essentially a pancake with a waffle pattern. There was also a scrambled egg dish, which wasn’t bad.  There were no sweet things available.  There weren’t a lot of people having breakfast when I was down there so that was a good thing.  Ellen went down later and had her own breakfast "feast".

The plan today was to meet Nalsey, Steve, Sid, and Mirin at Langer’s Deli in Downtown LA.  Langer’s Deli is at the corner of 7th and Alvarado, a place we probably never visited in all the years we lived in LA.  We asked Noah to come along with us – to spend more time with him – and to spend time with his relatives.  We parked with validation a block away from the restaurant.  Langer’s offered large, but expensive, dishes.  Ellen and I shared the Fish and Chips.  Noah had a really good looking tuna sandwich.  My sibs opted for the signature pastrami sandwiches, which were huge.  I also really liked the cole slaw and pickles.  A true deli.

Again, even though we had the whole gang present, we did not get a picture.  Amazing.

The restaurant is located right across the street from iconic MacArthur Park, the subject of the song written by Jimmy Webb in 1967 (it's about a couple breaking up and the Park was one of the components in their relationship).  There was some kind of political rally going on when we got there but the park, which looked a little run down, was still amazing, with its lake and the large number of birds that wandered the park. 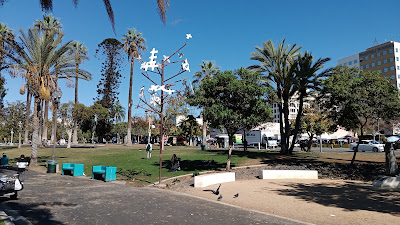 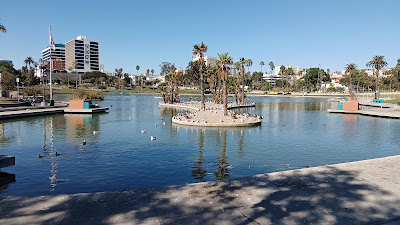 Here's a panoramic shot of the park.

There was a monument with glyphs that we could not understand but it was a good spot to take a photo. 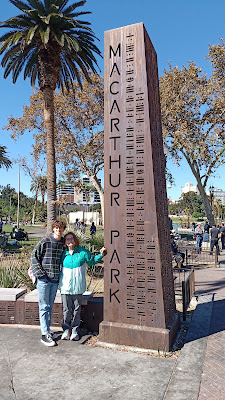 We dropped Noah off at Oxy and made a brief stop to pick up some donuts (at a local shop).  From there, we went to LA via the freeways to check into our second hotel, La Quinta Hotel and Suites by Wyndham on Century Blvd.  We had done a lot of driving so we gassed up at a 76 station across the street from the Fox Car Rental Office - gas was just under $6 a gallon.  I had trouble getting the pump to work and the clerk in the office told me that pumps in LA had sensors that detected when a nozzle was inserted into the gas inlet.  She told me to make sure the nozzle was in correctly.  Now gassed up, we went to the hotel and checked in.  They let us park our car in the upper level of their parking lot (normally, I guess parking is not free).

Our room was ready, so we dropped off our bags and rested for a while.  Later in the afternoon, we dropped off our car at Fox and walked back to the hotel which took only a few minutes.  At that point, we were in for the night.  We didn’t need any dinner after that huge lunch at Langer’s.  What we did have were three donut holes each courtesy of the donut shop in Glendale.

Our room - 441 - in the hotel was pretty nice – seemed new. The room overlooked Century Blvd and its back-to-back line of rental car stores. There were probably six or seven of these stores on the one block across from the hotel.

We had a very noisy neighbor, whose TV was audible in the hallway.  I called the desk and within five minutes, security was banging (really banging) on their door and yelling “Security”.  It took about four bangs to get the door open.  The guest - I think I spotted a teenager coming out of the room earlier - immediately turned down his TV and apologized for being loud.  We never heard from him again.  That’s what I call effective security (no polite phone calls in this place).