Even though we tried to establish a good sleep schedule, it was not a good sleeping night.

I had another wonderful breakfast in the La Veranda – fluffy pancakes made to order and those otherworldly scrambled eggs. Also, the coffee is always hot and the view is always great.

We are back to Cabo after the Pandemic Break.  The ship came in from the Pacific Side of the tip of the Baja Peninsula and I got some nice shots of our approach.  That culminated in great shots of "Los Arcos" (should actually be called "El Arco" since there is only one arch). 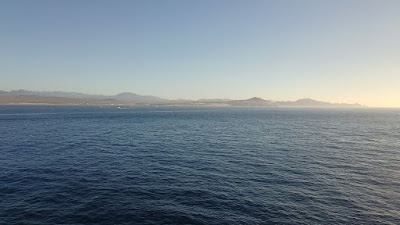 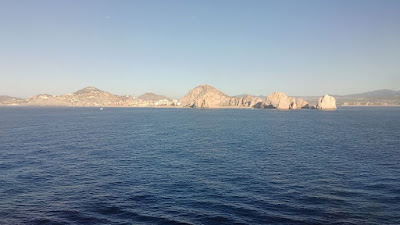 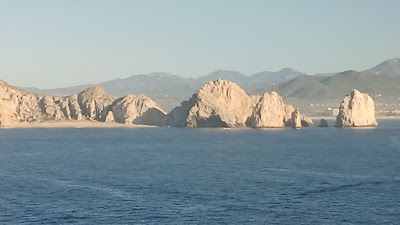 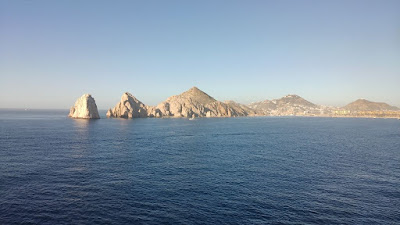 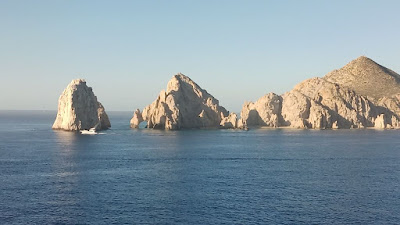 Once we were at anchor, I asked Google Maps to spot our location.  Again, we are actually in the middle of the bay. 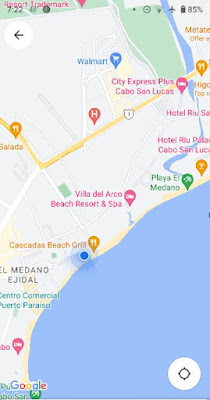 I am reading “Portrait of an Unknown Woman”, the latest Gabriel Allon novel by Daniel Silva.  Gabriel is retired now and living with his wife and two kids in Venice, but he just can’t stop getting involved in stuff.

We had lunch in the La Veranda. Today, I had an Ahi Tuna “burger” prepared at the Pool Grill.  It was served on a sesame seed bun and was very good.  I had it with potato salad – I haven’t tried the fries on board yet.  A small salad with Ranch (really good) completed the lunch. And, of course, there was a bottle of Stella.

We debated going ashore but decided to stay on board.  Since the ship was passenger light today, we found some nice loungers on the pool deck.  We complemented that with daiquiris - strawberry for me and a "dirty banana" for Ellen (chocolate syrup makes it "dirty"). 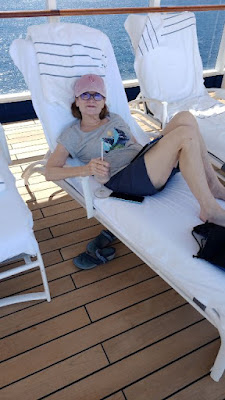 When it got a little too warm on the pool deck, we retreated to our veranda, which was in the shade all day.

We were facing the shore opposite Los Arcos, where most times it is quite noisy with all of the partying going on.  It was quieter today with almost all of the music and PA noise was coming from the city itself, which was in front of Mariner.  If we could hear it out in the middle of the water, I can only imagine how loud it was on shore.

There were a lot of jet skis on the water and an occasional banana boat but not too many personal boats.  One rather spectacular yacht did sail by.  We have seen this yacht in Cabo several times - it is dark, stealthy looking, and has a military feel to it.  I got a picture of what I like to call the "Bat Yacht" framed by Cabo in the distance. 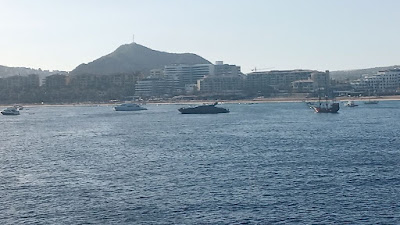 Laundry is complimentary of Mariner – our first batch came back missing some items (found later) – I am most concerned about my missing “Antique Archeology” t-shirt purchased in Nashville at the “American Pickers” store.  There is an APB and a BOLO out for that shirt.

Dinner tonight is in the Compass Rose Dining Room.  We both had the salmon – I had mine with Hollandaise Sauce (there is a choice of sauces) along with a terrific baked potato and sautéed spinach.  A Cesar Salad started off the meal.  All the food was good.

Tonight, we attended the second Production Show. “Divos and Divas” – songs from the iconic stars of yesterday and now.  The stars featured Barbra Streisand, Dolly Parton, Aretha Franklin, Neil Diamond, and Elton John.  The girls were in great voice tonight and the two male lead singers are still looking for their rhythm and tune.  They sounded much better when backed up by some of the other singers.  We didn’t stay until the end because we did not want another late evening.

We went back to the room to once again try and get on our usual schedule.