As is usually the case, I am up early today - early enough to catch a beautiful sunrise - for my breakfast in Horizon Court. 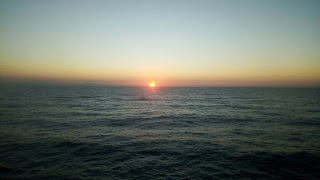 We are both On tour today – “Highlights of Mazatlan Express”.  Many of the places we are visiting are on the map below. 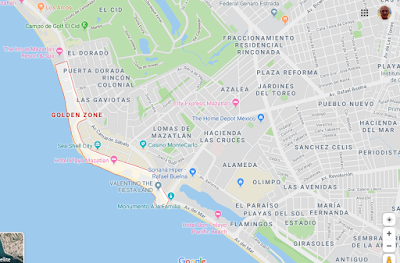 Our Tour Guide, Alex speaks perfect English and is very knowledgeable . Bus Tour of the old city including the Cathedral of the Ascension”. 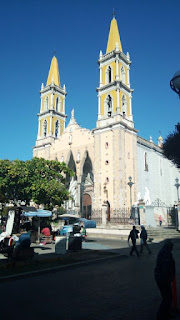 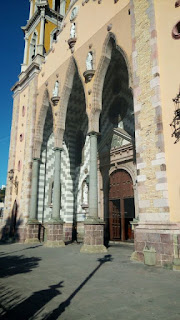 We have visited the Cathedral many times - it has the Jewish Stars on the stained glass windows - the Jewish population of Mazatlan provided the funds to finish the church when construction money ran out. 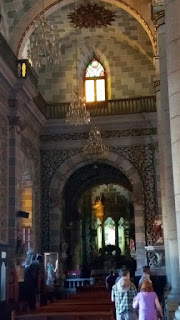 Across the street from the Cathedral is the scenic Plaza Mechado.  The plaza has wonderful gardens and gazebos.  This is the site for local festivals and other celebrations. 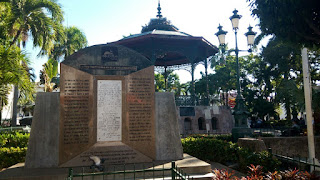 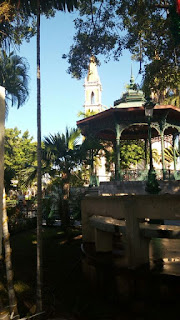 After visiting the Church and Square, the tour walked a few blocks (on somewhat difficult sidewalks) to the bus parking location.  We had a chance to browse the many shops on this walk.  The shops are pretty busy during the week.

The bus stopped by the Mazatlan Fish Market and Alex, like most tour guides, showed off some of the critters on sale there.  The fish are out in the open and while I hope they are iced, I'm not sure.

Our next stop is the Zona Dorada (Golden Zone) where all the large hotels and fancy shops are located.  This is a shopping stop at a Jewelry Store (I believe we have been here before) but, for me, it is a facility stop and beer and tequila tasting.  Last time, we were here, a young girl cleaned the bathroom after every use (just using a paper towel and no gloves, yikes).  Today, that was not the case - no cleaning between customers.  The beer and tequila were both good.

Mazatlan means "Place of the Deer" and their baseball team is the "Deers".  We walked across the street to check out the Mazatlan Deer gear place.  A cap would have been nice but they were off the chart expensive.

You can access the beach by walking through a breezeway along the string of shops.  There weren't a lot of folks out at the beach today,  which made for better pictures of the beautiful views. 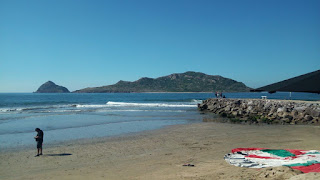 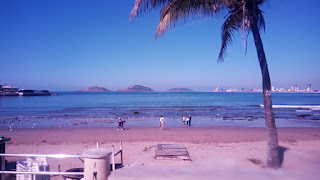 A tour of Mazatlan would not be complete without a stop at Olas Alta Beach to watch the cliff drivers.  These divers take off from a much lower cliff than the ones in Acapulco but there are still rocks and rough water down there.  The divers take a lot of time before they actually dive, giving me a chance to take some nice shots of the area.  I was particularly interested in the neat statue of a mermaid on the cliff. 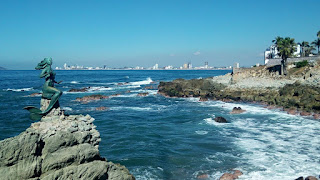 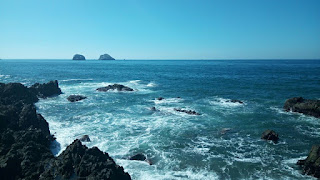 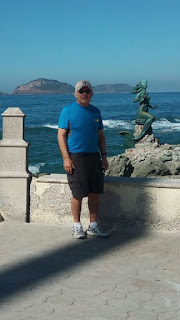 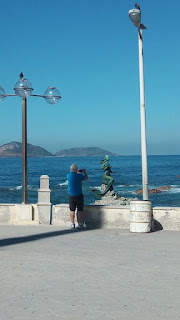 In this shot, you can see the divers getting ready and the spectators getting an up close view of the action. 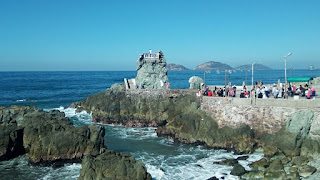 I was able to get a diver in action from leap to entry. 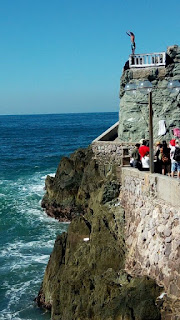 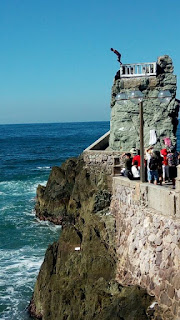 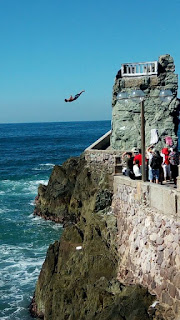 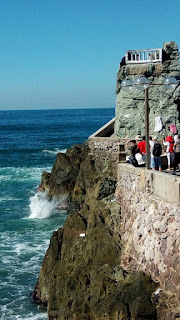 We took the beach road back to the pier.  Along the way, I was only able to take pictures from the bus (hence the weird pink hue).  We did see the Mazatlan City Sign, 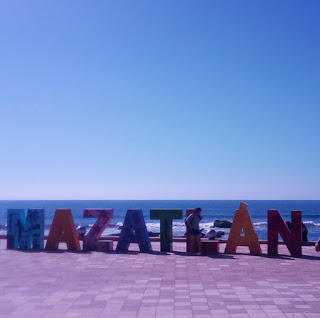 More statues (the malacon was dotted with them), 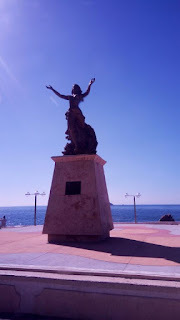 A statue of the Pulmonias Taxis - these are golf carts used to move people around town.  The word "pulmonias" means pneumonia - our guide called them "Influenza Taxis".  The name came from the fact that normal taxi drivers told people that riding in the open structured carts would give them pneumonia - hence pulmonias and influenza. 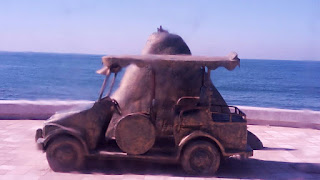 Mazatlan loves its baseball so a baseball statue has a prominent place along the beach. 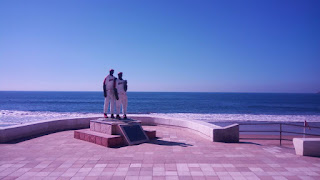 As we got closer to the pier, we got a good look at the El Faro Lighthouse - it is 500 feet above sea level and is the tallest lighthouse in the world. 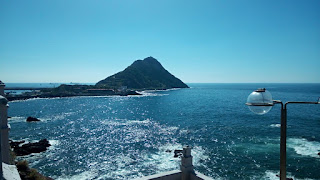 We also were able to see Grand Princess docked. 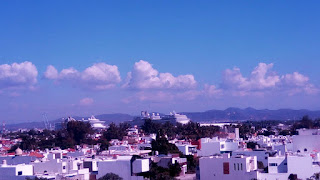 Back at the port, we both had massages at the smallest spa in the world (my guess) – a room about 8X10 – the spa is located at the corner of the shopping area near the port entrance.  Massages there are $40 but we only had $75 and that was the settle price.  A bit cramped but a real nice massage.

Back on the ship, I took some pictures of Mazatlan from Deck 15 Aft. 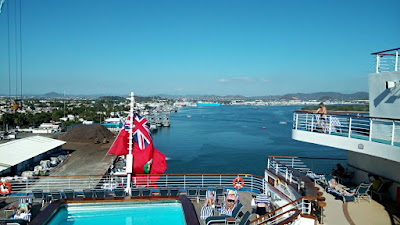 We went to Todd Alanson’s early show at 6:45 PM in the Vista Lounge – he was great – the best version of “Stars” from Les Mis I have ever heard.  We bought his CD and introduced ourselves.  He is coming back late in the next cruise.

Showtime tonight is “British Invasion”.  The theater is full for all the shows and you have to get there an hour early to get a seat.  We opted out of this show as we have seen in in various forms over the years.

A very nice day in Mazatlan.