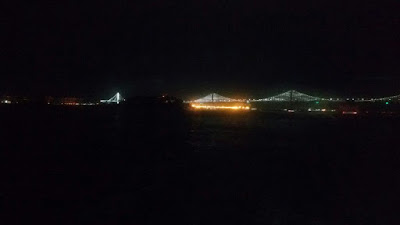 I was up in Horizon Court for an early breakfast and so glad that we are not getting off.  Breakfast was not rushed (at least for me).  The second cruise is special because our kids and grandkids are sailing with us.  The plan is to meet them later and we'll both board the ship together around noon.

I went out on the deck to get a picture of the sunrise over the bay.  It looked like it was going to be a beautiful day in San Francisco. 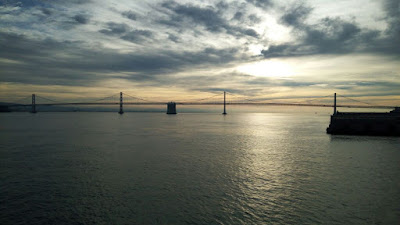 Armed with our in-transit cards, we disembarked, took some shots of the pier area, 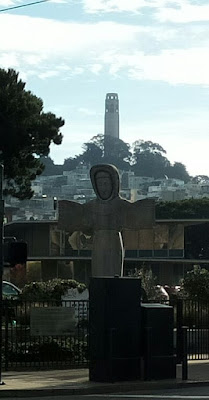 and met the family at a hotel near the pier.  They had to return the rental car and there was an rental office near the hotel.  The hotel was also where we were going to meet our cousins, Mark and Adele.  We found a table in the hotel and we were able to chat for quite a while - no one from the hotel came by to check on us (I guess they thought we were guests).

The plan was to walk back to the ship and check out the shops along the way.  Because the area was so touristic, everything was open, even on a Sunday.

Boarding and check-in was relatively straight forward and soon our entire party was on Grand Princess.

We had a nice lunch in Horizon Court, which, for some reason, was not as chaotic as it usually is on embarkation day.

The captain, in his introductory announcements during the lifeboat drill, indicated that it would be rough seas for the next two days. Something to look forward to.  The sail out was after sunset so we did not see anything except the lights on the Golden Gate Bridge (viewed from the comfort of the ship's lounges). As soon as Grand Princess sailed beyond the Golden Gate Bridge, the seas began to rock.

We all had dinner at 6:30 PM in the Michelangelo Dining Room at a great able for seven. We introduced ourselves to the head waiter who would be taking care of us for the next 15 days.  Leo and Amelia were trying to deal with the ship’s motion and didn't eat a lot at dinner.  I thought the dinner was very good and the service was excellent.


We did not attend the Welcome Aboard Show with Bobby Brooks Wilson.

The seas continued to be unfriendly at night.  We are in the forward section of the ship - usually a good place to be in nasty seas.  The bed seemed to moving in a circle and the booms caused by waves hitting the ship sounded like cannons.  The rest of our crew was in the midships area, where the motion should be less of an issue.

Seas are NOT smooth.