The seas are calmer but there is still a little chop.  It's a gray and bleak day as we sail toward Hawaii. 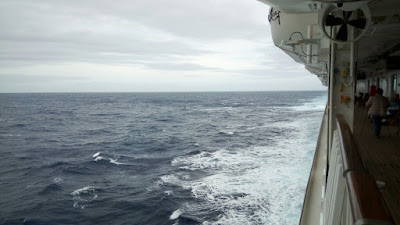 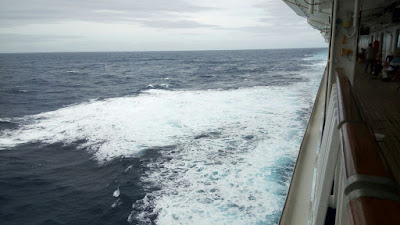 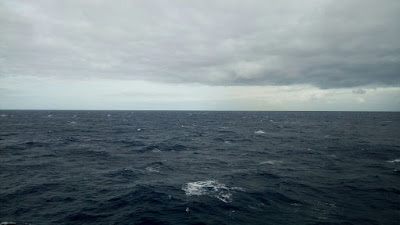 I was up in Horizon Court for another early and quiet breakfast.  Because of the unavailability of both cottage cheese and sour cream, I have a new paradigm for breakfast – pancakes and an egg (along with the mandatory oatmeal). I did try the Mueslix this morning and it was good but too sweet.

I went to Gloeta’s talk on Jellyfish and Corals this morning.  Her attendance numbers continue to reflect either the early hour or the passenger demographic.  I introduced myself to Gloeta after her talk and told her we are in her old room.  She seems personable enough.

This afternoon, I am once again in the Vista Lounge for my third talk – “Forensics and History: Mystery of the Romanovs”. This time the theater was more than 90 percent full with only a few seats over by the windows unoccupied (can't see the slides from there).  My computer froze twice (very annoying and requiring a reboot) and I ran five minutes over. The freezing up must have something to do with the Princess AV system since freeze-ups don't happen with my laptop and other systems.  I answered some questions out in the hallway as the theater was being used for a rehearsal.

Dova and crew had dinner in the Dining Room while the two of us had dinner up in the buffet – the walnut ravioli was very good and my homemade Cesar Salad (I tossed the Romaine and dressing myself) was also good.

We finished dinner pretty quickly so we went to hear Johnny Cardinale, Comedian and Guitarist, in the Vista Lounge. I thought he was pretty funny and his show was longer than most Princess shows.

We went from there to the Princess Theater to hear Elena Bosworth, Rock Cellist. Hard to describe her show – she was decked out in Goth Rock/Superstar gear and her Cello was a narrow space age thing that looked more like a blaster than an instrument. She had a huge light show on the back screen and the orchestra supplied a big time rock beat. She is from Ukraine so she is a little hard to understand but we stayed long enough to catch a terrific version of “Hallelujah” during which she sported angel wings (seriously).

The rest of the evening was spent with Steven in Crooners Bar.