Getting a little warmer outside but still no sun. 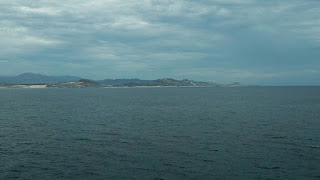 Once again, I am on at 9:30 AM in the Princess Theater so it’s up early and up to the Horizon Court.  I have had breakfast in the dark since the cruise started.  I tried a scrambled omelet with tomatoes, onions, and cheese.  It was OK.  The best breakfast item is the oatmeal.  You can’t get it yourself (maybe it’s messy or maybe it’s disease prevention, who knows).  The other good item on the buffet are the biscuits.  Still the best meal of the day.

A slight drop-off in attendance for this talk – “Forensic Detectives:  Identifying America’s Fallen Heroes” – Maybe 250 people. (We talked with Gary later in the day and he is also pulling small crowds – same as mine – and he has concluded that it’s the demographic on the ship).  I’ve run into a bizarre AV issue on this ship – for the last two days, I got all set up and did a checkout that everything was working.  When I started, the slides wouldn’t advance either via clicker or keys.  So, I rebooted and everything worked.  Today, I set up and kept checking the clicker and for some reason, there was no freeze up.  Good feedback from audience members.

It was warm enough to go up on Deck 15 Aft and relax on the couches – I am in the middle of Daniel Silva’s “The Rembrandt Affair” – another Gabriel Allon novel.  This one involves Nazi and Iranians so it is both historical and topical.  Not as much beat em up, shoot em up, but a lot of spycraft, which is also interesting.  Gabriel is getting up there in years and he is more cagey than scary.

The folks on this ship may not be big on lectures but they love the shows, especially the early show.  In order to get a seat you have to get to the theater at least 45 minutes early.  The show tonight features Vocalist Todd Alanson.  Todd, whom we saw on the Island Princess, is a terrific singer from Charleston, SC and NYC.  He is a Ovation Award Winner (LA theater scene) for “We Will Rock You”.  The theater was full and the Entertainment staff was enforcing the “no save” seats rule. 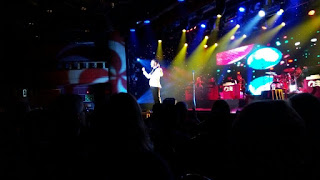 Todd put on a terrific show singing both popular stuff and show tunes – he tells good stories and really gets into the characters singing the songs (e.g. Les Mis).  One of his best numbers is as Javert singing "The Stars".