An absolutely beautiful day at our first Port of Call.

I was up early enough - pre-dawn - to witness our arrival 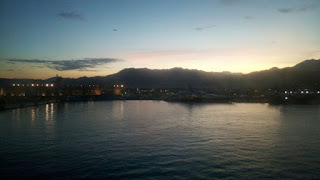 and also the arrival of the NCL Star. 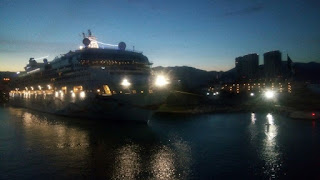 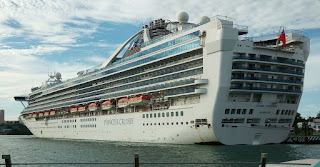 You can see our room in this picture - the first window on the left of that group. 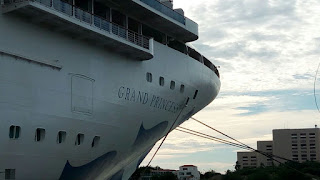 We are both on tour today – “Puerto Vallarta Highlights and Night of the Iguana Beach” (probably not the title but close).  The excursions are handled differently on Grand Princess this time round.  Usually, everyone gathers in the Theater in a section for their tour and an escort would lead them out to the pier.  This time, everyone just went out to the pier at the designated meeting time.  So much simpler and it seemed to work just fine.  We met our bus at 8:50 AM, got stickers that had our guides name on it – Danielle - and we were off.

Our first stop was the Church of our Lady of Guadalupe – the church with the impressive crown on the spire.  This is right across from the famed Malacon and the main square.  We didn’t go in the church but rather took shots of the beach and Bay of Banderas.  So for us, this was free time and we would meet up with our tour at the designated time.

Visibility today was unlimited - one could see all the way across the Bay. 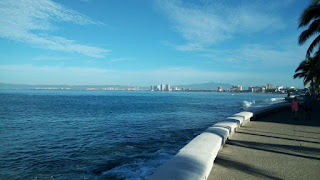 I also got a terrific panoramic shot of the beach and bay.

There were some very amazing statues along the beach including an intricate sand sculpture of a man sitting on a throne. 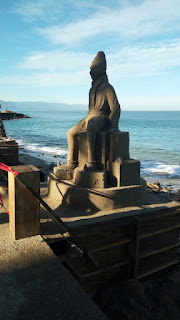 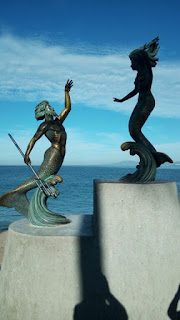 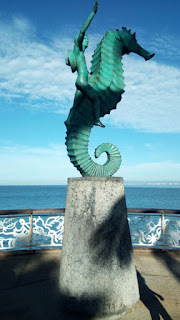 On the beach, there were several individuals constructing sculptures from the rocks. 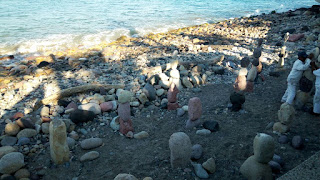 From there, we drove to another area of town for a shopping and facilities stop.  Some passengers had to make a stop at the pharmacy and I explained what the Mexican meds were that they had purchased.

No trip would be complete if we didn't get a picture of the "American Embassy" or as we know it back home, Subway.  We have seen them almost everywhere we have traveled.  I might, however, still be a little hesitant to get a tuna sandwich at this particular one. 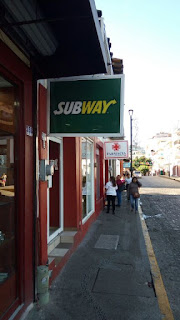 Once finished with shopping, we boarded the bus and headed away from the town to see the location used for the Elizabeth Taylor and Richard Burton iconic movie – “The Night of the Iguana” (directed by John Huston)”.  On the way there, we noticed a lot of building – condos mostly.  Some of Puerto Vallarta is not in good shape but condos continue to be built.

We came here on a vacation way back in 1985 and ate some fish tacos on the beach.  I can’t recall how we got here (rental car or cab).  Not only that, but we did not get sick from the tacos we bought from a shack on the beach - I actually got the Revenge later in the trip from eating a salad - I guess salads are not healthy everywhere.

We stayed for a few minutes so people could get photos of the beach and surrounding areas. 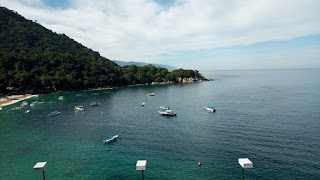 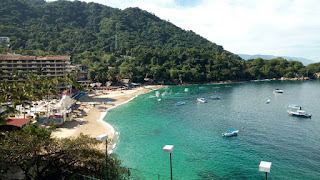 From there, we headed back to town for a drink stop at Oscar’s Restaurant.  The restaurant is located in a shopping area near the end of the Malacon.  I didn’t really care for the drink so, in the interest of food safety, I only took a sip.  We went up the stairs to the Malacon for more pictures. 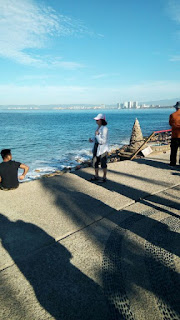 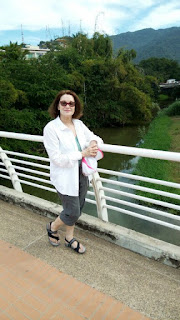 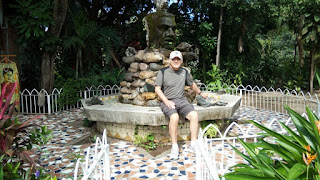 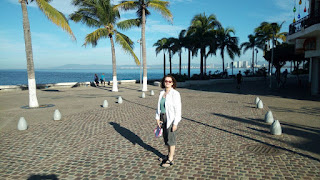 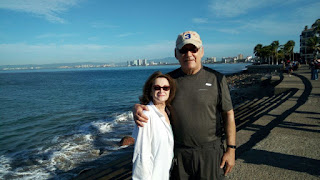 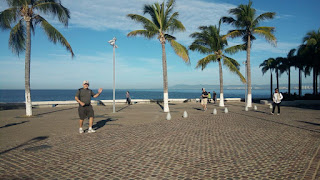 I wanted to taste some Tequila at Oscars so Danielle helped us find the tasting area.  We were the only ones there so we had the full attention of the bartender. 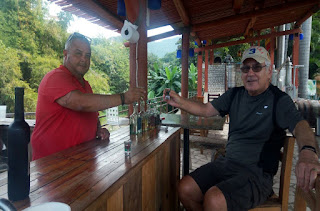 I tried four different kinds of tequila from the white variety to the five years in the barrel type.  The tequilas were all very smooth.  We even tried the chocolate tequila.  I think our taster guy was expecting me to buy a bottle to take home but we said another time.

The shopping area is huge but we did find our bus pick up point.  Soon, we were heading back to the port.  We asked Danielle if we could get dropped off near our go to spa in Puerto Vallarta.  The driver wound up dropping us off right across the street.

When we walked up to Yegos Spa, it looked closed but I saw the “Abierto” sign on the door.  We walked in and there was only one person in the waiting area - a women from the NCL ship getting a pedicure.  We were told it would be a while until we got in.  As it turned out, in a few minutes, I was told that I could go in and that my usual therapist, Marta, was not only still working here but available.  The funny thing is that every time I see Marta, she looks a little different.

There was a little mixup and Ellen didn’t get in until I was nearly finished (language and confusion).  My massage was great and I waited for Ellen out in the lobby.

Ellen told me earlier that they were including at no cost a defoliation scrub so I asked Martha about it and she said I could get it if I wanted.  I opted in and took the treatment (about 10 minutes) just as Ellen was finishing up.  The massages and defoliation cost $30 plus tips.  Another bargain in Mexico.

We walked across the street to the brand new pier terminal.  As we started our long walk to the ship, we were picked up by a tram that took us right to our ship.

We had dinner in the Michelangelo Dining Room because they had gazpacho, one of my favorite items, on tonight's menu.  I wound up having two bowls of soup along with a double sized Cesar Salad.  The rest of the dinner included the standard Salmon.  The dinner was wonderful.

It’s a late departure from Puerto Vallarta so there is no show tonight.  Instead, a local award-winning folkloric show was brought on board.  We were tired and didn’t go to the show.

I also paid a visit to Mike Witte and handed him the titles for the next cruise.

We watched the sail out from Deck 7.