A tossing and turning night – mostly due to the bed layout.  In our normal configuration, I wouldn’t be able to get out because the bed is against the wall.  So we tried to sleep at the other end.  With no headboard, the pillows wouldn’t stay put.  We’ll figure this out.

Got up early this morning because my talk is scheduled for 9:30 AM in the Princess Theater.  I was up in the Horizon Court at 6:15 AM (crazy, I know) just a little after they opened.  I am so glad that Grand Princess is open early for breakfast, in general.

The Princess Theater holds about 900 people and about 250-300 showed up for the talk – “Forensics and History: The Search for the Unknown Titanic Child”.  Considering the early hour and the actual number of English speakers, I considered this to be a good turnout.  Gary Shahan came on right after me so I made sure I finished right on time.

Still too chilly to take advantage of the couches on Deck 15 Aft.  I did venture out and took some pictures of the sea and deck.  We could see the coast of Baja Mexico in the distance. 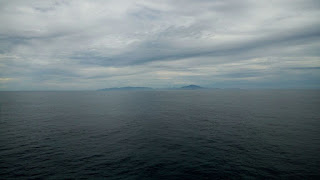 I also spotted an NCL cruiser. 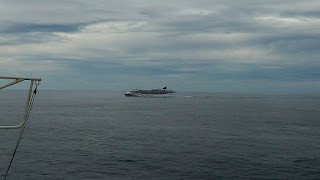 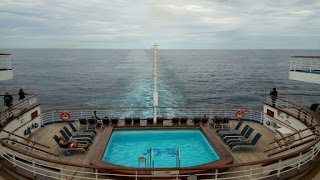 Some folks got really dressed up for formal night and some didn’t – I went with dress slacks, dress shirt, and tie.  Enforcing dress codes on the ship is a inexact process.

Showtime tonight featured the first production show – “Stardust”.  We’ve seen the show many times but, with each different set of singers and dancers, the presentations can be different.  This troupe has four singers (two and two) and nine dancers (three boys) (we heard there were some injured dancers on the mend).  The show, which features songs from the 50s was different – two of my favorite songs were cut – “Mr. Sandman” and “Johnny Angel”, and the two extra “singers” who do their background stuff at Stage Left were gone (also one of my favorite parts of the show).  The show was short – only 30 minutes – but still enjoyable because the Princess Singers and Dancers were very good. 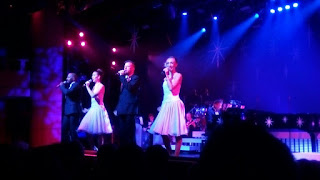 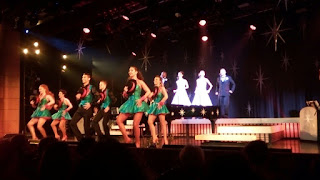 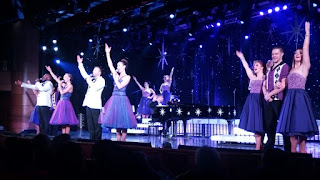