Another rock and roll night with some new noises and creaks thrown in.

As the sun rose, the seas seemed to settle down a bit and now the ship’s motion is not as noticeable.

I am not on the schedule today. At breakfast, several passengers asked me why and I told them that I do not know how the schedules are put together and I hope that I will be back tomorrow. On passenger told me they were calling Guest Relations to find out what happened to my talk. Nice to be wanted.

Even though it is a cloudy and breezy day, the couches up on deck 15 were quite comfortable – I spent a lot of time up there reading.  Still reading “Trace” by Casey Hill – the book is becoming more interesting. Some major clues are coming out but it’s not leading me to any suspects.

Time for another view of the seas from the Deck 15 seating area. 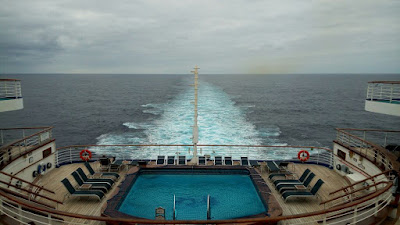 Lunch was in Horizon Court – we met up with everyone for that. There were lots of activities planned throughout the day and Ellen and the kids went to some of those.

At lunch, I saw Chef Lily and told her how much I enjoyed the veggie onion soup. I asked her if it would be possible to get some more of the soup and she said it would be available tonight – I was the only person who wanted the soup so I am not sure how Lily is going to do that.

So the plan for dinner was that Ellen and I would go to the Michelangelo Dining Room for the soup and appetizer (eggplant parmigiana) and then meet up with everyone in the buffet. We probably got the best table we’ve ever gotten (ocean view table for four set for two). The onion soup was very good again and VERY HOT (because it was baked). We finished and went upstairs and as luck would have it, there was little to eat– I tried the fish fingers but couldn’t tell what type of fish it was.  The soup and appetizer saved the day.

After dinner, we went to the Crooners Bar to hear Jumari and his guitar. We passed on the show – the saxophonist. Jumari did a very short set and was followed by Steven Jaymes and his very familiar play list.

From the Crooners Bar to the room – tired and throat is starting to act up.