The seas were rockier last night but manageable.  It is getting warmer outside and the skies are clearing in the afternoon. 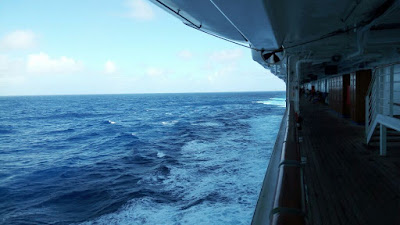 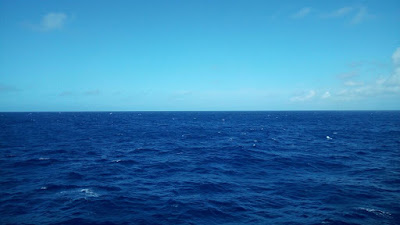 I’m developing some kind of laryngitis – so speaking will need to be at a minimum today. I took in a little of Gloeta’s presentation on volcanoes. She showed lots of interesting NGS videos of the recent eruption of Kilauea and how the lava leaving the caldera caused its collapse and the formation of new rifts and lava rivers.

Lunch today was in Da Vinci Dining Room, where I had a Cesar Salad and Pasta Oglio along with Fish Tacos (as only a cruise ship can make them).

I joined Leo and his posse for ongoing trivia up in One5 and today we got nine out of ten right (missing the Rocky Movie theme).

I did some reading up on Deck 15 before heading to the Princess Theater for Talk 4 –“DNA Testing: A Genetic Eyewitness” at 2:30 PM. I am sucking on those restaurant mints to keep my sore throat at bay. The turnout in the theater was good – hard to estimate but the crowd would have been SRO in the Vista Lounge. The computer froze for the sixth time in a row – this time the PC shut itself down and rebooted. The tech disconnected the HMDI/VGA cable and reattached it and it didn’t freeze by the time I started. The talk went well and end up right on time. I talked to some people in the hall afterward. One thing about these cruises on Grand Princess is that people are telling me what a neat job I am doing on my PowerPoint Slides – not something I hear that often. Oh, yes, I just had enough voice left to finish the talk and answer a couple of questions.

Dinner was in the Michelangelo Dining Room – Tempura Sushi, double Cesar Salad, baked potato soup, salmon with a baked potato and veggie fried rice (made especially for us by the Asst. Maitre D for the table.

We were able to get seats for the 7:45 PM show starring Comedian Johnny Cardinale. This show, funnier than his first show, was an absolute hoot.

After dessert with Dova and Danny, we went back to the room (I could no longer talk).

Clocks turn back one hour tonight to put us on Hawaii Time.