The captain was indeed telling the truth – the ship was being tossed all night. Booms and large movements. Slept off and on.  The sea is definitely angry. 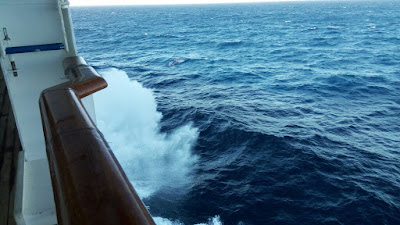 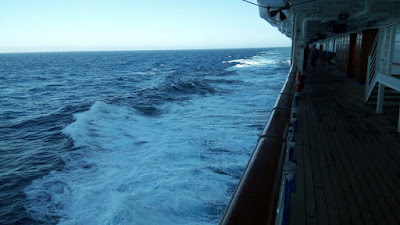 Had breakfast up in the Horizon Court – still on same regime – oatmeal (brown sugar and raisins), pancakes with one fried egg, and biscuits. The ship’s motion did not keep people from getting up there early for breakfast. Breakfast is again the best meal of the day - the biscuits are especially good.

I spent some of the morning in the International Cafe working on my first presentation and having a decaf iced mocha latte from New Grounds.  I have to constantly check the charges for coffee since there is a lot of variability in how the baristas put in the bill.  The desk always corrects the bill if needed.  That said, the coffee is really good and there are small tables near power cords at the side of the seating area. 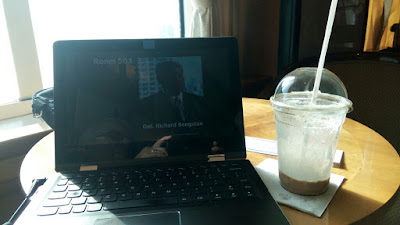 We all had lunch in the Da Vinci Dining Room. I had the James Beard French Toast and ham free Eggs Benedict.  The food was good but I don't really like to wait that long for the food to arrive.  That's OK for dinner but not for lunch.

Mike explained that there would be no afternoon Bingo (wonder why?) on this cruise so that left the Vista Lounge open for lectures. My first talk – “The CSI Phenomenon: Forensics onTelevision” was at 2:30 PM (a lot more convenient, at least for me, than the 9:30 AM slot). The Vista Lounge was about 70 percent full (approximately 250 -300 people according to Mike) – a good start. I need to come up with a better wrap up for this talk–it goes out with a whimper.

I looked up the seating capacities for the various venues on ship (to estimate attendance):

The Pacific Ocean became more pacific in the afternoon. 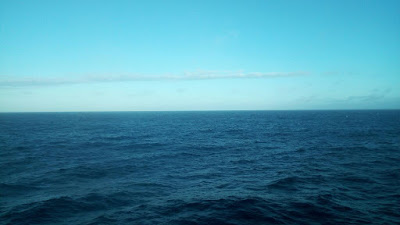 We had dinner in Alfredo’s Pizzeria – everyone had their own pizzas. I was disappointed that there were no sun dried tomatoes available for the Vegetariana Pizza. Still, it was quiet and peaceful or the opposite of the Dining Rooms.

We went to “Stardust”, the first Production Show on this trip. When we got close to the theater, we noticed an overwhelming bilge smell. In the theater, the smell was almost intolerable. There were no announcements and we did not smell anything on our floor. I hope they took care of it. I smelled something like this before years ago on the Golden Princess and no one said anything about it then.  By the way, the show was, as always, entertaining (even though we have see it several times).