Harwich is a ferry port town with accessibility to the trains right outside the terminal (both a ship and train terminal).

We were told the night before that we would need to move into 2014 (porthole cabin) so we had to pack.  The bags would then be moved to our new cabin when it was ready.  Getting our new Sea Pass cards and room assignment was more complicated that it should have been but it all worked out in the end.  We had cleared British Immigration a few days ago so all we had to was to get our new photos taken.

Our goal today was to find WiFi inside or near the terminal so we could catch up with everything.  Although they do have WiFi in the terminal, the system was down for upgrade or repairs.  We opted not to go into Harwich (based on input) so we will have to wait for Copenhagen to connect. 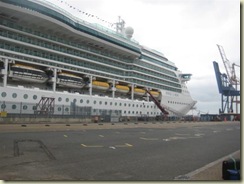 Jewel of the Seas docked in Harwich

If you look off the port side of the ship you see the countryside surrounding Harwich.  This looks like England. 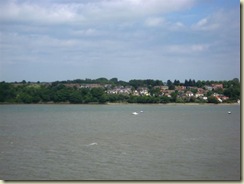 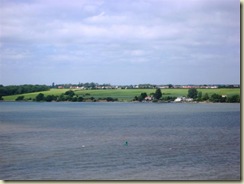 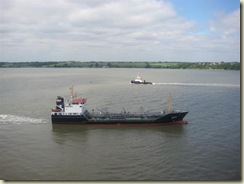 The Fuel Barge leaving after filling her up

I heard from Raymond that Clodagh wanted to meet with the Enrichment Group at 5 PM in the Centrum.  On board for this voyage are:  Ted Pohlman (doing a back to back); Colin Jones (Gardening); Dennis and Olympeas Samuel (Dance Instructors).  This gave us the whole afternoon to relax.

Back on the ship ahead of the passengers, we had a relaxing lunch and spent most of the day in the Solarium.  With about 100 passengers returning, I decided to combine the “CSI Phenomenon” and the “Science of CSI” into one talk.  After a number of different versions, I had something that might work.

At the 5:00 PM meeting in Clodagh’s office, she went over the logistics of the enrichment activities for the cruise.  She also wanted us to attend the Welcome Aboard Show so she could introduce us.

Soon we were on our way. 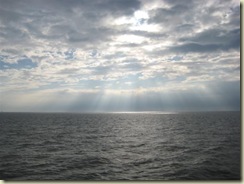 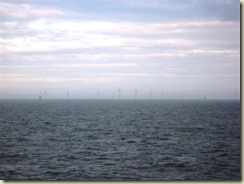 We received a message in the room from Guest Relations that they were willing to offer us a room on Deck 3 and to check with them.  We were able to check out the room, which was just like our other room but a bit more mid-ship.  We decided that we would move into this room tomorrow.

At the Welcome Aboard Show, Clodagh did introduce all of the speakers and said a little about what they would be lecturing on.  That was nice.  The show itself was pretty good headlined by British Comedian Jeff Stephenson, who constructs his show around audience members (people who come in late, etc).  The RC Singers and Dancers also performed in their usual terrific way (below). 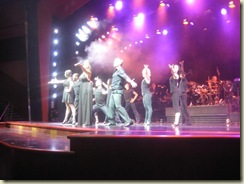 We caught Lynn MacKay in the Schooner Lounge and she, of course, did “Hallelujah” just for me.