Copenhagen, located on the east coast of the island of Zealand (the largest of Denmark’s 500 islands), has a population of 1.7 million people.  It is Scandinavia’s largest city.

Had to get up a little earlier to make our tour this morning.  Copenhagen Harbor is interesting.  There a numerous wind turbines on the various pieces of land enclosing the harbor (below). 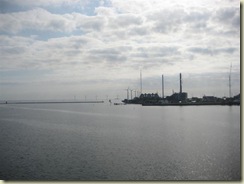 The harbor is busy but not with cruise ships but with ferries (below), that dock in a different place than cruise ships. 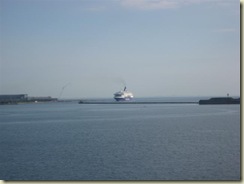 Our tour today - “Jewish Copenhagen” will take us to two museums with Jewish content and a walking tour of the Latin Quarter.  No tour of Copenhagen would be complete without a stop to see the “Little Mermaid”. 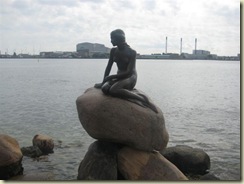 The “Little Mermaid” was not derived from Hans Christian Andersen’s story but from a 1913 Opera based on his story.  One rich attendee was so taken by the dancing of the lead, that he commissioned the statue. The statue has both legs and fish elements (a compromise between the artist and patron).  The last time we were in Copenhagen (2000), we could not see the Little Mermaid due to an infestation of gnats.  No problem today.

Leaving the port, we saw the “Angel of the Port”, placed their to protect the sailors using the port. 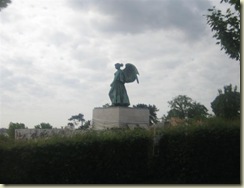 A magnificent statue/fountain of Gefjon, a Norse goddess associated with plowing, was also in the harbor area. 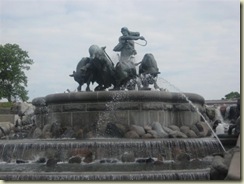 Also in the park area of the harbor is a statue of Winston Churchill. 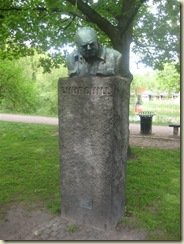 Our first stop is the “Museum of Danish Resistance”, which deals with the Nazi Occupation of Denmark between 1940 and 1945.

Outside of the museum are two statues.  The first statue (below) commemorates the resistance by the Danish Communists.  The second statue (far below) memorializes those who lost their lives in the resistance. 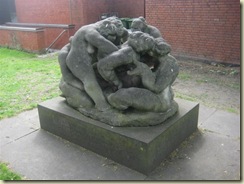 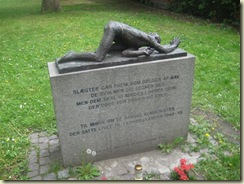 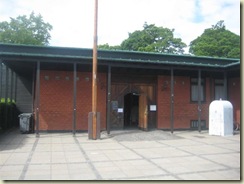 The Museum of Danish Resistance

The Danes opted to cooperate with the Nazis so that the country would still remain Danish and not a totally Nazified country.  Between 1942 and 1943, the resistance used sabotage (blowing up munitions storage facilities).  In 1943, the Germans declared a state of emergency and the government resigned.  In October 1943, the Germans tried to deport the Danish Jews but they were saved by sending them (about 7000 of them) to Sweden.  Some of the children of these Jews remained in Denmark in foster homes and were reunited – not always successfully – with their parents after the war.

The museum contained several items from the Resistance Period, including: correspondence, ID cards, photographs, clothing, weapons, and films.  it even had an armored vehicle (below) used by the resistance).  There was a beautiful array of stained glass windows that resembled Chagall windows but were constructed by a Danish artist named Pedersen. 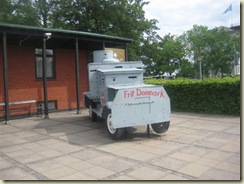 On our way to “The Danish Jewish Museum”, we passed some of the beautiful sites of Copenhagen:  Waterways, buildings with spires. 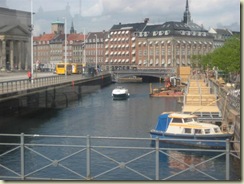 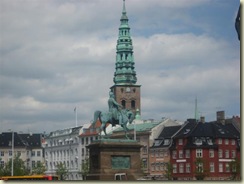 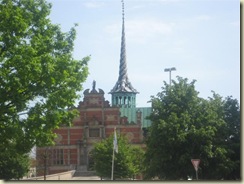 The Danish Jewish Museum is located in the Royal Boathouse of King Christian IV.  This is near the Parliament Building (below).  The Parliament Building Square is home to a series of unique sculptures – elongated figures on poles (far below); there is a story behind these works I am sure. 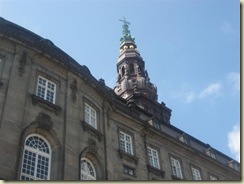 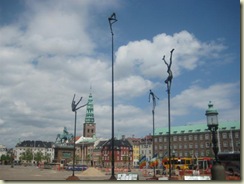 Cameras are not permitted in the museum so I had to leave the camera in the bus (no exterior or interior pictures).  The museum was designed by David Liebeskind (the designer of the new WTC in New York) and opened in 2004.  It is titled “Mitzvah” referring to the mitvahs (good deeds) performed by the Danish people on behalf on their Jewish population.

The inside of the museum is very unique. The floors are not level but rather each floor in the building is slanted at a different angle.  While this may make it difficult to negotiate and could make some people queasy, it is very interesting.  The walls are all wood plates screwed in place.  You can see the original brickwork in the ceiling.

We spent about a half hour in the museum on our own perusing the artifacts.  Then the guide related a number of stories concerning the history of Danish Jews during the Nazi occupation.  The garden area around the Museum is quite nice so I am sorry I couldn’t take any pictures.  Finally, we were on our way to the Latin Quarter (called so because it is the location of the University) to see the main Synagogue.

On the way to the synagogue, we were lucky enough to see the changing of the guard at the Royal Palace at Noon (below). 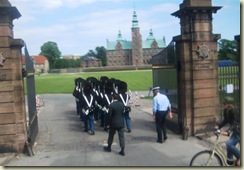 The synagogue proved to be a big disappointment since it was totally wrapped in construction tarps and undergoing extensive renovation.  While this is the main synagogue, there are two other satellite synagogues.

We decided to leave the tour and go out on our own especially since the weather was absolutely perfect.

The ship had provided shuttle busses to and from the pier so our final stop had to be the “King’s Square”.  Also, today was a bank holiday so all the shops were closed; the only places open were restaurants, cafes, and souvenier shops.   This meant that the streets were packed with people off of work.

The walk was very scenic. 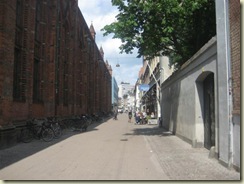 Where we started our walk 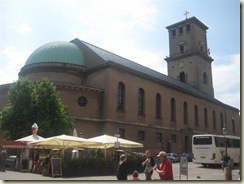 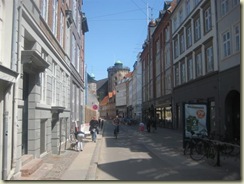 Copenhagen is a city with an incredible number of statues.  One of the more unusual statues was one of Mercury on a roof looking like he was on his way to deliver a message to the gods. 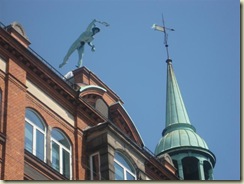 Our walk to us to a square with a centerpiece fountain (below). 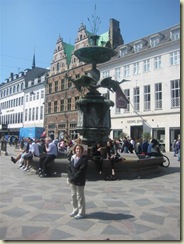 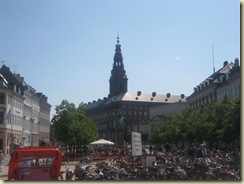 View from the fountain square

From there, we made our way to the King’s Square.  The central garden and statue (King Christian V) were fenced off (below).  The square itself consisted of vendors and hot dog stands (yes).  The streets surrounding the square were mainly occupied by upscale stores and shops.  It was like an entire city center of Rodeo Drives. 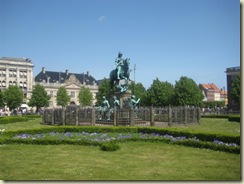 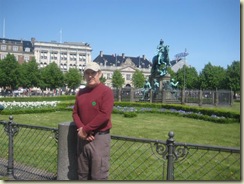 A block away was the “New Harbor” with its signature anchor (below).  On this day, all of the cafes were filled with customers; FYI:  The amount of food on the plates in these cafes was enormous.  I guess portions are generous in Copenhagen, which is also known to be an expensive place. 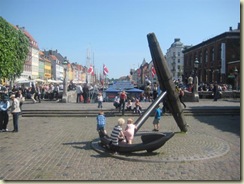 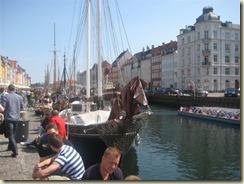 We took the shuttle back to the ship and got there just in time for afternoon tea.

The Sail Away was very picturesque – we passed several islands on our way out to open sea. 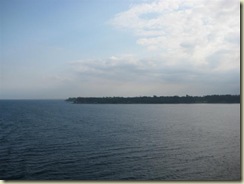 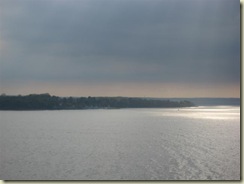 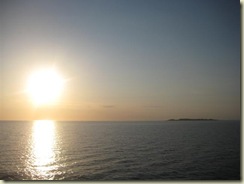 Even though we had seen it before, we attended the Production Show - “West End to Broadway”.  It was great the second time around.

A little note on our room – it is so quiet that I don’t need any earplugs.  That is a first for me.