A crummy day at sea… 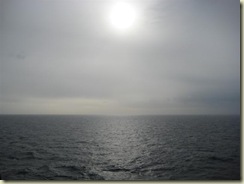 Windy, rainy, gray, and choppy – that about covers it.

Not a lot of chop during the night – may the Captain went around some of the expected weather or maybe we just got lucky.

Up at 3:45 AM (clock change effect) and then again at 5:45 AM.  The Windjammer doesn’t open until 7:00 AM and there’s no place to go.  At 6:45 AM, I made my way up to breakfast.  It is usually pretty quiet on a sea day at opening but I guess quite a few people were up early this morning.  So, no peaceful breakfast this morning.  I don’t stay long and my magazine is still not finished.

The morning was spent in the Solarium – we tried the Hollywood Odyssey for Quiet Time but the little kid’s were in their playtime period.

Some hardy folks walked the deck in the drizzle and wind. 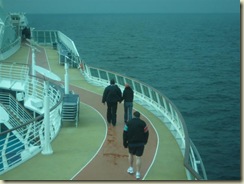 My final talk in the Coral Theater - “The Innocence Project” – has never been presented before on a ship.  Lots had to be trimmed from the original talk to make it fit the allotted time.   If I do this lecture again, I will need to make some modifications.  Some things didn’t flow well – I could tell from the audience. 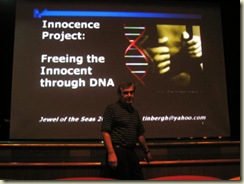 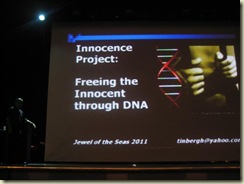 The attendance was still good – about 250 (estimating based on 300 seats in the center section).  Nice solid round of applause at the end.

I had about 15 minutes left for Q and A and got some interesting comments (especially how there is no “Double Jeopardy” in the UK) from the audience (most of which stayed for the session).  It was a good wrap up for the series.

Packed most of my stuff earlier today so now I can relax for a few minutes in the Solarium (5:20 PM ship time).

Before dinner, we listed to Bogart and Boyd in the Centrum play their easy listening music selections.  For the first time, I was able to get a picture of them at work (below). 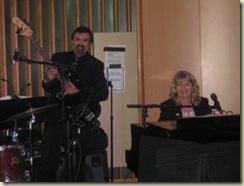 The Farewell Show tonight is totally different from the one last cruise so we head to the theater to get seats.

Two of the Activities staff, Jorge (I think) (from Brazil) and Nadiya (from the Ukraine) are both greeters tonight at the theater.  Jorge introduced me before my first two presentations and also sings in the Centrum every so often.  Nadiya runs trivia and is a great dancer (teaches dancing on the ship).

Before you know it, everyone is getting their picture taken. 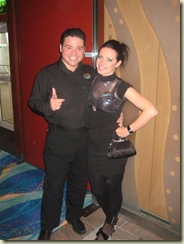 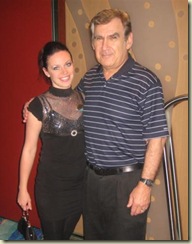 Tonight’s show is a bit unusual.  The first act is rhythmic gymnast, Yelena Larkina, who is a combination contortionist and hoop gymnast.  All in all, it turned out to be pretty enjoyable and the audience really liked her.  She’s at work below. 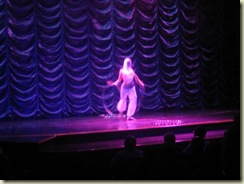 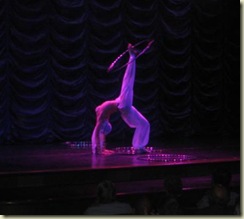 The second act was Kirk Kremo, foreign but of unknown origin, who juggled hats and other items.  He didn’t speak at all but the act was OK and amusing at times.

The Celebrity Singers and Dancers finished off the evening as they did on the first cruise, singing the “RCI Goodbye Song”. 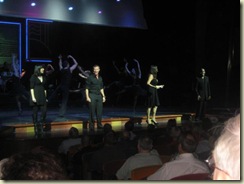 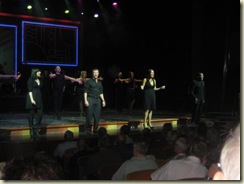 That was followed by the march of the crew, who joined Clo on stage for the finale.  Even Clo was singing along. 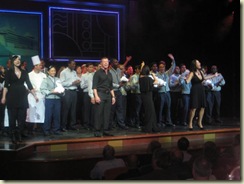 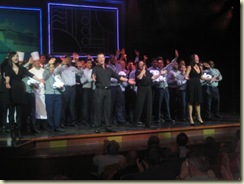 We met Clo outside the theater after the shows…hugs all around.

Walking back to the room after the show, I was able to capture the final sunset of the cruise (below). 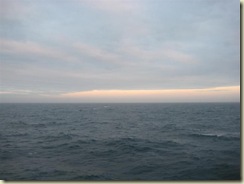 Bags are all outside in the hall and we are ready to go home.

The North Sea has been pretty tame.