The day started out OK as the Jewel of the Seas slowly maneuvered its way to the Gothenburg Pier.  It was a tight fit and the ship had to rotate on its axis to get into the docking area. 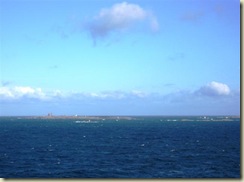 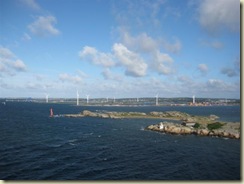 Gothenburg is Sweden’s second largest city with about 500,000 inhabitants.  It is home to a Volvo factory.  The pier is about nine miles from the city so we are staying on ship today.  That worked out to be a smart move since the weather changed quickly to cold, wind, and rain.

We spent almost all day in the Solarium.  About an hour prior to push, we heard music coming from the pier.  A local band – most likely a high school band – complete with flag girls and cheerleaders were putting on a concert and marching exhibition for the passengers.  The cheerleaders were all excellent dancers and considering the conditions (cold and nasty wind), they were great.  They did not stop (over a half hour) until the ship had pushed a considerable distance from the pier. 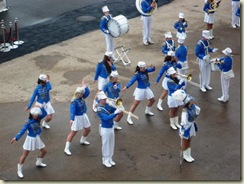 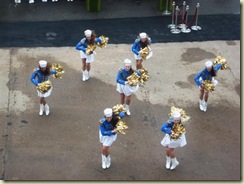 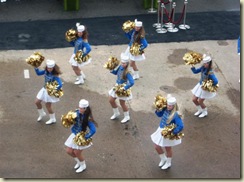 The ship had to push pretty slowly to ensure that the stern cleared the pier before the ship started its turn to head out.  The JOTS passed several interesting islands, carved out by the ice during the last Ice Age. 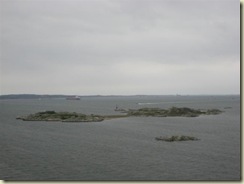 Also present were the ubiquitous wind turbines – a predictable site in the Scandinavian countries. 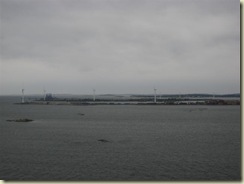 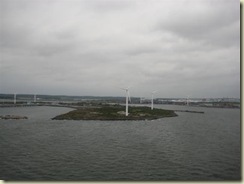 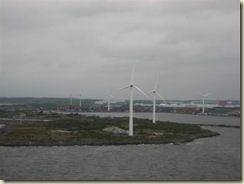 The winds were pretty strong.  At one point, I noticed that the ship was starting a pretty hard left turn and at a pretty good clip.  The turn actually tilted the ship a good 5 degrees.  I could actually feel some incremental g-force and thought I heard a low frequency groan. This caused dishes to crash, water to empty from the Solarium Pool (the Solarium floor had about an inch of water which drained away pretty quickly), and some concern on the part of the passengers.  It was the steepest “bank” we had ever experienced on a cruise ship.  Captain Stig came on the com later to explain that the sharp turn was due to the strong winds and apologized for the excitement.  He warned that choppy seas were ahead and seasick prone passengers should prepare.

We had dinner with Betsy and Wayne in the Windjammer Cafe.  We had interesting stories to exchange.  Turns out that Betsy has a Ph.D. in French and French Film Music from UCLA.  That explains why she sings so many French songs and does them so well.

The Headliners tonight are the “East Coast Boys”, a tribute group celebrating the songs of Frankie Valli and the Four Seasons.  They had the proper “Joisy” accents and did a good job singing.  At times, they seemed unsure of their spots on the stage.  They sang well and the crowd loved them.  At the end, they introduced themselves – the Frankie Valli character sounded like he might be a Brit. 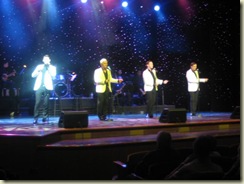 We spent a little more time in the Safari Club with Betsy and Wayne and then called it a day.