We have made it across the Atlantic (almost – we are still 800 miles west of Portugal). 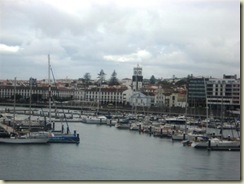 Punta Delgada from the ship

Some think that the Azores are the remnants of the ancient continent of Atlantis.  However, today is it known for its pineapples.

Our tour today - “Sete Cidades Crater Lakes” – will take us to the main crater of the extinct volcano.

Our first stop is a pineapple plantation.  This plantation is not the kind you would see in Hawaii – here the pineapples are all grown in hot houses and these hot houses are actually in Abelheira, a suburb of Ponta Delgada.  The guide told us that the maturation of the fruit has been shorted from three years to 18 months by exposing the plants to the smoke of pineapples leaves. 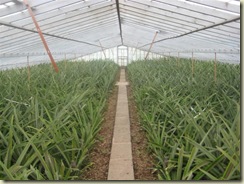 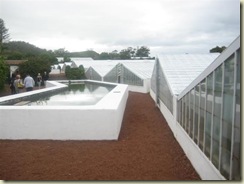 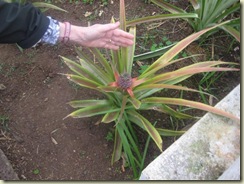 From the plantation, the bus continued on and up to the edge of the extinct volcano, Sete Cidades (“Seven Cities”).  The caldera is 1900 feet above sea level and 8 miles in circumference.  There are two lakes in the crater separated by a constructed bridge.  Usually, the two lakes have different colors due to the makeup of the water and vegetation but today they are both gray. 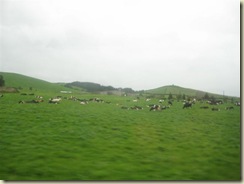 On our way to Sete Cidades 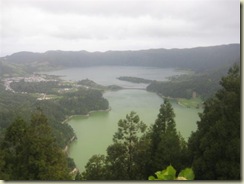 The Sete Cidades Crater and Lakes 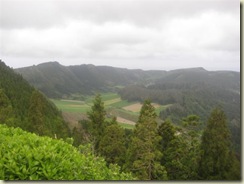 Countryside near the crater 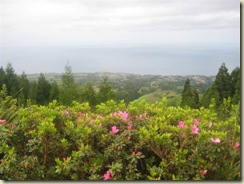 Back on the bus for a short drive to another view point that would give us a view of both North and South end of the island (below). 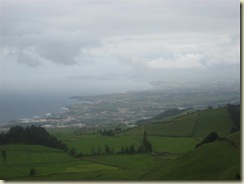 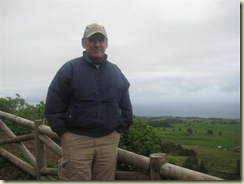 Pacific Ocean in the back ground

The return trip to Punta Delgada seemed a bit shorter than the way out.  We, once again, passed Pope John Paul II Airport, which deals both with domestic (interisland) and international flights. 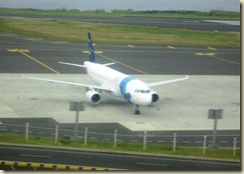 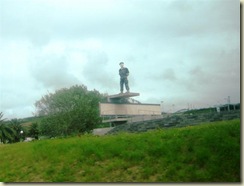 Our final stop was at the Antonio Borges Botanical Gardens.  This park (“Romantic Park” according to the guide) contains lakes (not filled with water at this time), flowers and trees, and lava formations.  The lava formations were the highlight of the park; these formations took the form of tunnels, bridges, and structures. 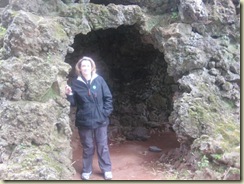 Ellen and a lava tunnel 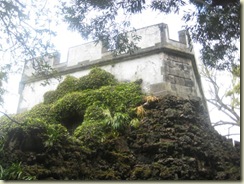 Structure atop the lava tunnel 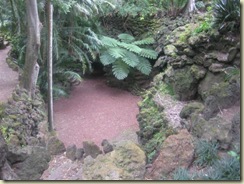 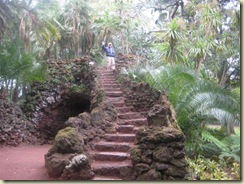 That’s me on the lava staircase 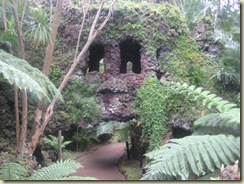 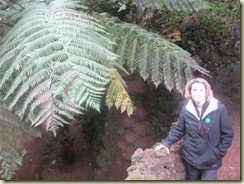 Ellen and giant fern near a “Lake” 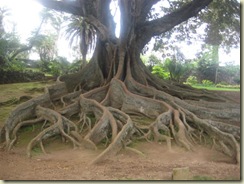 The bus took us back to the ship.  After a quick lunch, we decided to walk through Punta Delgada to look for an internet hotspot.  We were told that there was free wifi in the port building (not true) or in one of the restaurants near the pier (not true).  We went to a hotel across from the pier to ask about internet but Ellen asked the clerk if we could use his wifi.  He said we could and gave us the key code.  The system did not work that well but we eventually had a chance to catch up on e-mails and even chat with the kids back home.

We spent about 45 minutes on line.  We were told that there were no health spas in town but decided to take a short walk around the town to check out what Punta Delgada was like.  There weren’t many shops and the streets (brick like) were narrow and you need to be careful since the cars zipped by pretty fast. 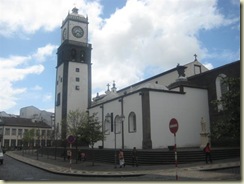 A church in the city center 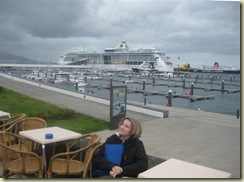 E and the Jewel of the Seas

We returned to the ship for the 5:00 PM Sail Away.

The headliner tonight was Bob Arno, a Swedish expert on pickpockets.  As he entered the theater, he managed to steal all sorts of items from members of the audience.  I think that plants were involved in some of the stunts (e.g. a tie that kept getting longer).  The act was amusing and a little creepy.  He also showed videos of pickpockets in action.

Another time change (forward) tomorrow so that ends the evening.

The captain has indicated that the seas will get rough about midnight.