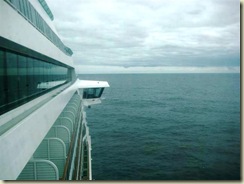 Overslept a bit so I had to get breakfast pretty quickly and get ready for the talk today": “DNA Testing:  Solving History’s Mysteries” (9 AM – Coral Theater).  The time change has taken its toll on people and on my attendance.  The crowd probably numbers about 200 this morning.  During the day, a number of people apologize for missing the talk.  Still, the feedback is very positive from those who attended.

Today, I am trying something new.  After the talk, I invited the audience to join me for an informal Q and A session in the Safari Club.  About 30 people attend and it was a very lively and successful session.  The cruise director for the next leg of the voyage – Clodagh O’Connor stopped by to check it out.  Later on at dinner, she told us she was thinking of having a similar session on the next leg.  She also told me that the talks would likely be in the theater in the afternoon.

Bob Arno is giving an afternoon session on how to avoid being a victim of pickpockets and other kinds of fraud (internet fraud).  He is knowledgeable but I already knew most everything he discussed.  Still he is amusing. To me, he sounds like Lawrence Welk.

Between dinner and show, we relax in the Schooner Bar (listening to Anna Babak at the piano).  Since sunset is now pretty late (9:30 PM), it is also a good time to read/play on he Kindle. 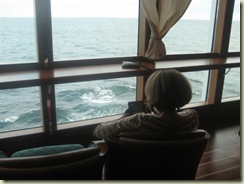 The show tonight is “Knight Magic” with Kyle Knight and his wife, Mistie (Miss Nevada at one time).  We have seen them before and their act is just about the same.  One of their trademark twists is letting the audience on stage during the “Sawing the Lady in Half” illusion (below). 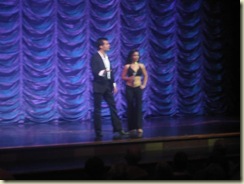 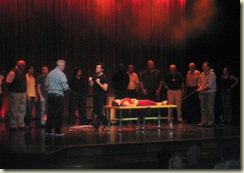 Mistie still in one piece 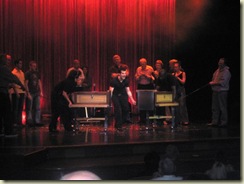 Some of the illusions depend a lot of the flexibility and size of Mistie but the Lady in Half and their take on “Metamorphosis” involve quite a bit more.

Another time change (forward) tomorrow.  When I give my talk in the morning at 9:00 AM it will actually be 2 AM Chicago Time.`

Straight to the room after the show…