Not a beautiful day in Helsinki…All downhill from the sail in. 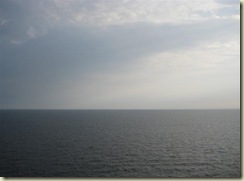 Helsinki is situated on a peninsula in the Bay of Finland and has a population of approximately 500,000 people.  Finland and Russia have had several armed conflicts in the past and in WWII, Finland fought along side the Germans against Russian.  The Guide admitted that this was not a good choice.

Our tour today is “City of Helsinki” designed to show us most of the sites of Helsinki from a bus.  While cool and gray at the outset, the rain started almost immediately.  This made viewing and shooting the sites virtually impossible.  In addition, some of the most well known sites – The Rock Church – were closed (in this case due to renovation) (below). 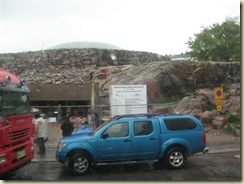 Our next stop in the pouring rain in Sibelius Park – a tribute to Jean Sibelius, Finland’s Greatest Composer.  The park is a very nice garden (top below) and contains a sculpture dedicated to the composer (middle below).  The abstract sculpture consists of 500 stainless steel pipes.  It looks like a massive wind charm but it makes no noise,  The man himself is depicted in a sculpture behind the abstract work (bottom below).  The sculpture is built on a shale mound – we noticed a lot of shale around Helsinki. 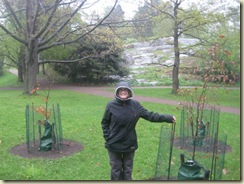 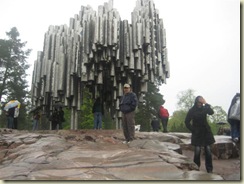 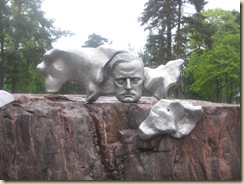 After making our way around various neighborhoods and hearing about the per capita consumption of coffee (Finland is number 1 in Europe) and how they make the best vodka, we stopped for a short time at a sports complex.  Besides a soccer stadium (and perhaps the Olympic Stadium of 1940), the park contains a large gym (which contained free washrooms – a Euro elsewhere) and statues of two of its national athletic heroes:  Paavo Nurmi (The Flying Finn) and Lasse Viren (a long distance runner who fell and still got the gold). 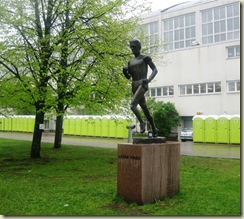 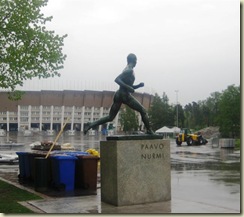 Nest stop: Senate Square, with its government buildings and the Lutheran Cathedral (1830 –1852) (below). 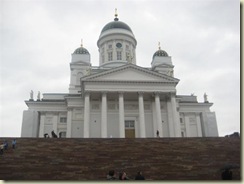 In the 1800s, Finland was part of the Russian Empire ruled by Czar Alexander II, whose statue is the centerpiece of Senate Square. 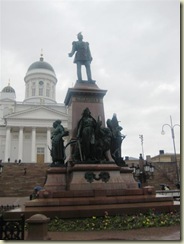 At this point, we decided to leave the tour a check out this area of Helsinki on our own.  Down the street from Senate Square is Market Square, with some souvenir shops.  Because of the pouring rain, many of the shops are not open.  We did, however, get this cute photo below during our wanderings. 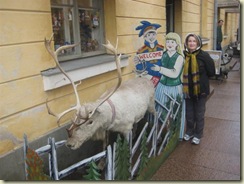 The thee Baltic Capitals we have visited on this trip – Copenhagen, Stockholm,and Helsinki – are scary expensive places.  We have also had difficulty finding internet hotspots.

Serendipity intervened when we noticed a bunch of people from the tour entering a building across from Market Square.  This building turned out to be the City Hall, which, like many libraries, had free internet (30 minutes) and free washrooms (clean and bright).  We signed in, sent pictures, caught up with everything – all in thirty minutes.  The people in the City Hall were so helpful and friendly.  What I did not see were a lot of tall people – aren’t Finns the tallest people on the planet.

The City Hall had a marvelous sculptured (below), which I like to call “All Thumbs” 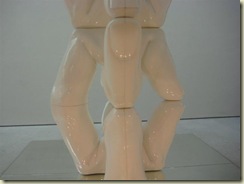 We managed to locate the Shuttle pickup spot and took our dripping wet selves back to the ship.  A late lunch in the Windjammer and then off to the Solarium.

The weather improved dramatically once we returned to the ship making the sail away very scenic (two pictures below). 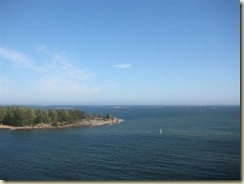 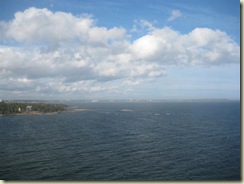 As we saw in Stockholm, the last Ice Age carved out some interesting geological features in the bay of Finland including many tiny islands (below). 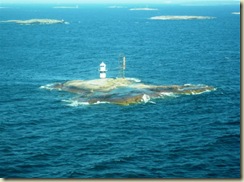 And I saw it from the best seat in the Solarium. 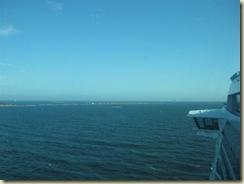 After dinner, we spent the rest of the evening listening to Celebration 4 in the Safari Club.  We opted not to see “City of Dreams” again.  Ellen made a new friend, Eden, a little girl from Israel. 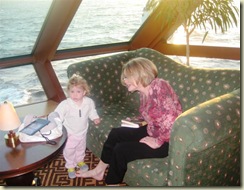 Sunset tonight was about 9:50 PM and beautiful. 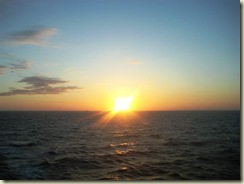 We called it a night because we have an early tour tomorrow.  However, when we checked the tickets, our tour was actually a new one and scheduled for the afternoon.  I guess that’s a bonus…