A beautiful day in the North Sea…

The notorious rough seas of this part of the oceans decided not to show up and the ride is smooth.

We moved into Cabin 3058 (not knowing whether we would have quiet neighbors).  We packed up again and moved everything into the new room by ourselves.  We only unpacked what we needed for the time being and will do the rest later. 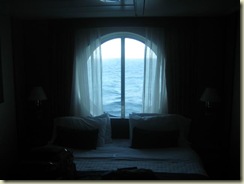 I decided to try my first trivia session (hosted by Clodagh) at 1:00 PM.  I joined a couple and as it turns out we won with 13 (of 19) correct answers and won RCI Pens (I gave my pen to the couple to hand to one of their friends).  It turns out that playing trivia is OK (according to Clodagh).  I am going to keep my pen the next time we win.

My first talk of this voyage was at 3:00 PM in the Choral Theater.  This talk - “The CSI Phenomenon” is a hybrid between the CSI stuff and the Science of CSI (newly modified to meet the time slot).  The second part is called “CSI: Science or Television”.  I had a good turnout but the crowd was pretty quiet and not very interactive.  The total attendance was 176 folks. 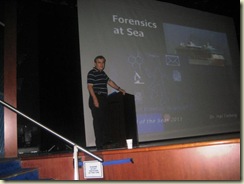 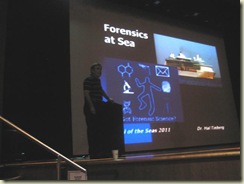 Relaxing in the Solarium rounded out the afternoon.  We were treated to a late but beautiful sunset. 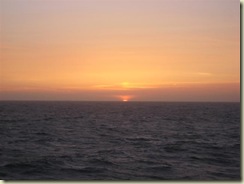 This part of the North Sea is heavy with ship traffic (mostly tankers) (see below). 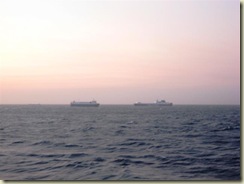 Last cruise, we had a tribute artist doing Celine Dion.  Tonight we have “An Evening with Lionel Ritchie” with Marcus Jefferson.

Copenhagen tomorrow and no time change…