NOTE:  The itinerary for this cruise has changed.  Instead of Puerto Rico, St Kitts, and one other island, Apex is now stopping at Puerto Costa Maya, Belize City, and Cozumel.  One sea day at the start and two sea days to get back to FLL at the end.  Our first day at sea was a cool and cloudy one.  But we are still sailing with other ships. 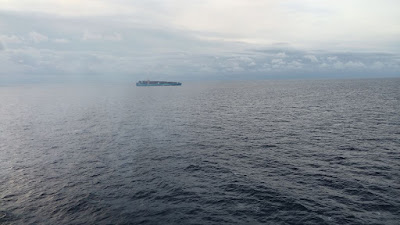 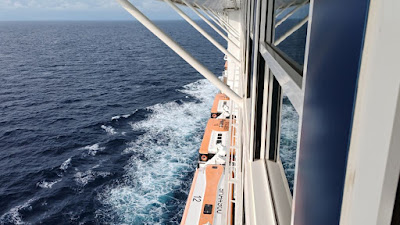 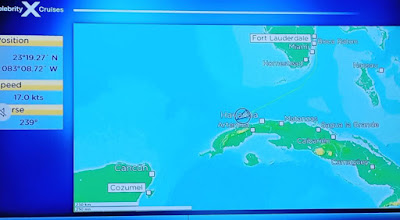 Thanks to my earplugs, the room was quiet – we haven’t quite figured out what the banging noises are.  They sound like carts being rolled around in the Oceanview Café, but they are present at even slow times up there.  No matter, the earplugs do the trick.

Still not a terrific night’s sleep – getting to be a theme.  I also had to be up early to make my 9:15 AM start time for my first talk – “Forensics and History: Search for the Unknown Titanic Child”.  Darren gave me a heads up that the talks would all be in the Club and at 9:15 AM this time round.  He said there was another organization on board, which I found out later was a convention of Travel Agents – easily recognizable by their blue T-shirts.

I got to the Club at 8:45 AM – the screens on Apex are bigger and crisper than on Edge and they are all over the venue.  You can sit anywhere and still see the slides.  On Edge, the AV used my jump drive and their computer but here, my PC will be driving the presentation.  We set it up and the images are super clear.  The only problem is that the front screen is so high that I have to bend backwards to see what’s on there.  I will need to figure out a better place to stand for the next talk. 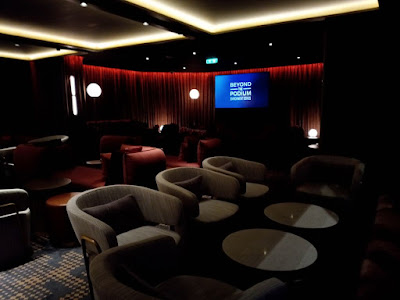 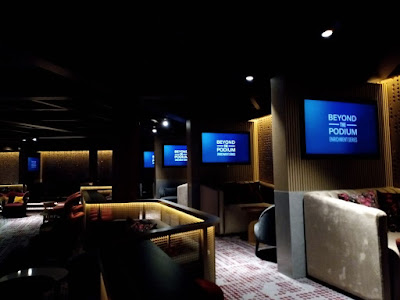 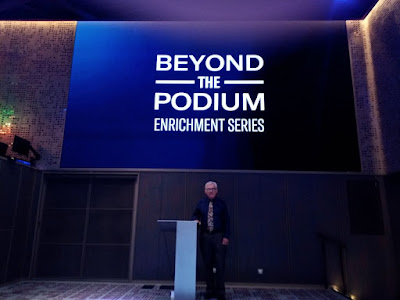 My expectations were low for this first talk and at around 9:00 AM, there were about 10 people in the Club.  At the last minute, a crowd entered and when I started, I had maybe 100 or so folks there (the whole first level, where they had set up seats, was filled).  A pleasant surprise.  I had never started a series with the "Search for the Unknown Titanic Child", so I had to reconfigure the slides.  I still ran a few minutes over (because a guest had a question during the talk) and there was another presentation on upcoming destinations after me.  I am going to trim away some slides from this presentation before I give it again.  One audience member (the same one who had the earlier question), who seemed to be pretty knowledgeable, guessed my Colombo slide before I showed it.  A good start.  Just to balance things off, I tripped getting back on the stage to break down my equipment and jammed by hands and back after hitting the back wall of the stage (I took some Tylenol for that) – it could have been worse, but my basic Karate training kicked in and I used my hands to break my fall and not my face.

BTW, the Travel Agents were in the Theater at the same time I was doing my presentation – this doesn't reduce my audience pool (there are over 700 agents on board) since they wouldn't be at my talks anyway.  The pool is essentially what it was for Cruise Number 1.  No issue for me at all.

Opting for a quiet lunch, we went to the Cosmopolitan Restaurant. Even though there are more people on this ship, we still managed to get a window table for four.  We both had deep fried (could have been fried a little deeper) mozzarella sticks and marinara pesto dipping sauce.  I had a strange, deconstructed salad and a veggie burger (I have not been able to finish these V burgers.  (NOTE: After some investigation online, I have concluded that thy are Impossible Burgers (someone posted that fact) and that might explain the size and the lack of odor that I see in my Beyond Burgers back home.).  I had a peach cobbler for dessert, and I think Ellen had the Apple Pie.  I should mention that while we were eating our quiet lunch, the restaurant was invaded and taken over by the Travel Agents.  We finished and searched for a quieter place.

There are so many more people on this ship compared to the last cruise – the elevators are more crowded (we are masked) and there is just so much more foot traffic. I wonder what the unmasked think of us and the few other masked folks.

From the talk, I went to the iLounge on Deck 3 Aft to try and get my Surf and Text Internet to work.  The tech took my phone and signed in exactly the way I had tried several times the night before and, of course, it logged on.  I think he did something else, but we’ll never know.  Now that the app was functional, I set up dinner reservations for the whole cruise – a must considering the sheer numbers of passengers.

It is much cooler outside so the Solarium, in turn, is cooler.  We found some loungers and spent most of the time there – I even got back some of that sleep deficit that I’ve been struggling with.

The dress code tonight is Elegant Chic and people will be taking their photos.  We do not have dinner reservations, so we are not changing our clothes and we will be eating in the Oceanview Café.  I had the pasta guy make me Spaghetti Alfredo with tomatoes, broccoli, and onions.  I also had a slice and half of pizza with caramelized onions and goat cheese.  The Café is essentially deserted.  We wanted to eat on the back deck, but it was raining.

We, obviously, are not going to see “Rockumentary” in the Theater and instead opt for the quiet of our room.  We opened the window and it was like being on a real balcony.  I actually watched a few minutes of a football game (on mute) while Ellen was reading on the Veranda.  There are very few choices on the in-cabin TV and I never watch TV in the room on a cruise.