It was a little bumpy – more like shaky – last night as we made our way to Mexico.  The shaking actually woke me up at around 5 AM or so.  I then proceeded to oversleep until 7:30 AM which meant that I would not have a peaceful breakfast up in the Oceanview Café.  I did get sour cream on my waffle today along with cottage cheese and strawberry jam.  I got some scrambled eggs but did not finish them.  I did get a decent and distanced window seat but the view of Puerto Maya was, at best, dismal. 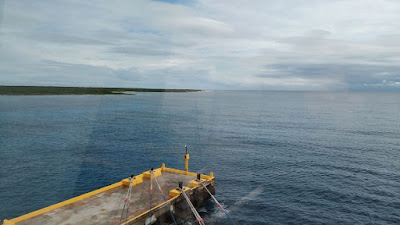 I used Google Maps to get the location of Celebrity Apex.  The screenshots were quite interesting. 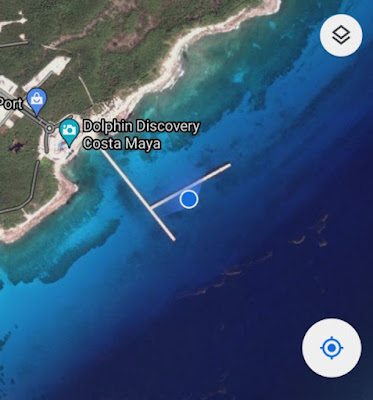 Ellen and I wanted to try the breakfast in Eden this morning.  They are only open from 7:30 – 9:00 AM.  We got their fifteen minutes before closing.  We both had a bowl of steel cut oatmeal (brown sugar, almonds, and raisins in mine).  The breakfast sandwiches were all premade and had some kind of meat included.  The only other items available to us were the bear claws and sweet rolls (so we tried those and took the rest back to the room).

We went back to Eden for the morning Trivia Contest.  Today, the topic was “decades” – when did a certain even take place.  Pretty good turnout for trivia as always.  We managed to get 8 or 15 correct – the winner got 9 so it was a tough contest.  Still, it was fun to be in a group sort of.

Lunch involved my getting a salad from Oceanview Café, some tuna and egg salad along with some guacamole to the Aqua Spa Café where Ellen was having their signature tuna patty and some kind of salad.  The salad was good as was the tuna and egg salad but the guacamole was super salty to the point of inedibility.  Still, that was enough food.

After lunch we found some window seats in the Solarium and were going to be there for the rest of the afternoon.  I cracked the window a bit to let out some of the chlorine.  One of the crew wanted to shut it because it was pouring outside and making the area wet.  He eventually left it open.  Our seats gave us a clear view of the ship parked next to us today, the Serenade of the Seas. 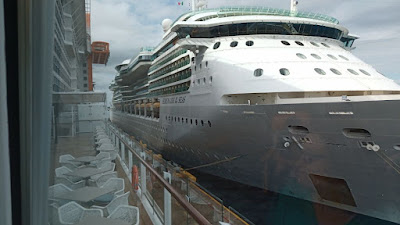 Serenade is an older and much smaller cruise ship than Apex.  It sailed on a four day RT from Tampa FL; Costa Maya was the only port of call.  I also noticed that many of the passengers were wearing masks outside and that the crew was all masked.  When passengers weren’t wearing masks they were carrying them.  I looked up the COVID rules for RCL – fully vaccinated passengers and crew; masks indoors and only off when eating or drinking.  Masks optional outdoors except when distancing is not possible.  More stringent than current Celebrity protocols (which I also double checked in case some changes had come along since we departed).

The rain continued all day 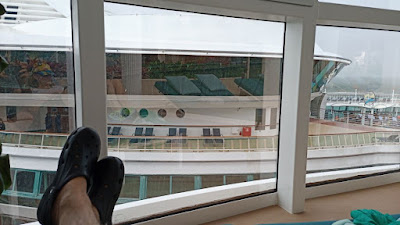 so there was only one way to stay on Deck 14 and move between the Solarium and the Café.  At 4 PM, Ellen and I went to the Oceanview Café to get afternoon “tea” and ruin our dinner.  I had a couple of plain scones with butter (in the morning, the little brother of those scones serves the roll of “bisquits”.  They had quiche and other goodies but I was happy with the scones.

We have reservations tonight at the Cosmopolitan and our current favorite Hostess, Olga from Ukraine.  She had been seating us at tables for four but with no tablemates.  Once again, we had great window seats to watch the rather non-descript sail away.  Ellen ordered two mushroom-based starters but one of them turned out to be a roasted veggie tart (which I finished).  I had the Cesar Salad, which was good but so large a portion that I was unable to finish it.  I decided to try the Pan Seared Hake (after determining that it was kosher – I had had Hake before as Fish and Chips in Buenos Aires).  This fish was undercooked and a bit chewy.  I ate the mashed potatoes that came with it and I told the concerned waiter it was OK.  Ellen had the terrific trout and a mushroom-based starter which she liked.  We both had carrot cake. The carrot cake was layered but good.

We got to the theater early because we tried to hang out in the Grand Plaza but it got too loud.  We got our usual seats and were worried that now that the ship had more people that passengers might actually want to sit next to us in these seats.  That never happened since the turnout for this show was quite a bit smaller than most evening shows.

The headliner tonight (and a neighbor of ours on Deck 12) was Anthony Salci, pianist and promoter of a concert called “A Concert for Unity”.  I was positive that we had een him in the past but I couldn’t find him in my logs.  He was backed up by the always loud Apex Orchestra and started his set with the theme from “Pirates of the Caribbean” which was arranged by Hans Zimmer, the proponent of thunderous movie sound tracks.  He then played a familiar song (whose title escapes me) by Pink. His third number was the obligatory, “Fields of Gold”, which has been done several times on these cruises.  The music kept getting louder even on such mellow songs as “Amazing Grace”. 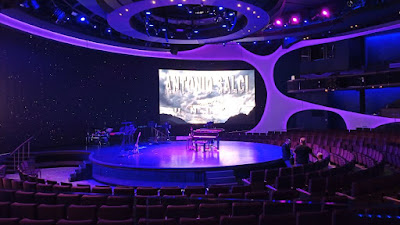 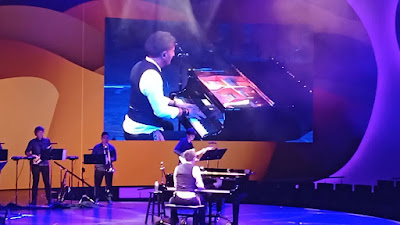 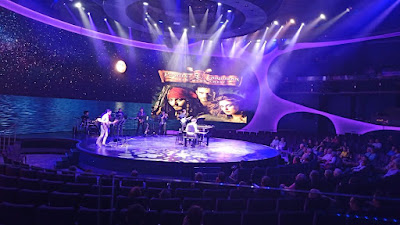 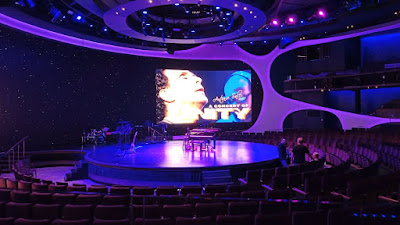 I was dealing with both a headache and sore throat so we went back to the room for Tylenol and Advil.

I watched a little bit of Monday Night Football on mute. That was a first on a ship for me.

The ship is still rocking as she makes her way to Belize City.